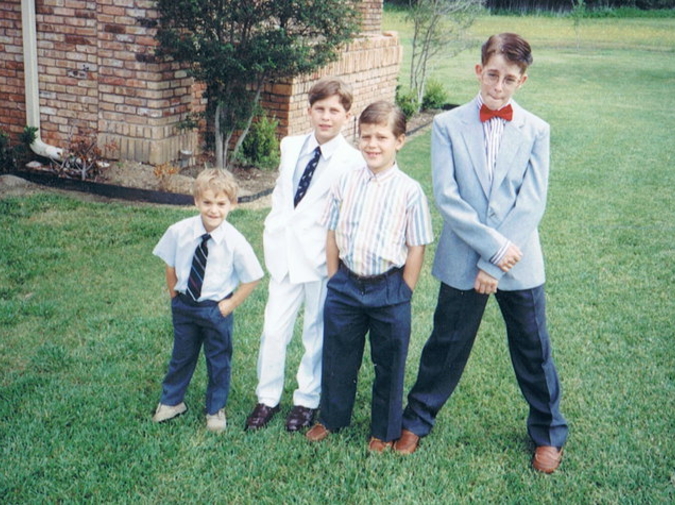 The first dirty magazine I ever owned—that I ever saw—found me on the side of a rock road in north Texas. I was part of a battalion of late 80s little shits who had go-karts and lived out in the middle of nowhere. I wasn't the leader. My older brother was, and I was his lieutenant. We all were. Our chief fears at the time were killer bees and that maybe one of us would get snatched by a Satanist and sacrificed on a makeshift alter fashioned from a large wooden utility spool in a dry washout somewhere. We never imagined good things happening. And then we found two grocery bags full of nudie magazines.

Everywhere we went we brought a cloud of white chalk and exhaust with us. In the summers the neighborhood was mostly just the sound of Briggs & Stratton motors rattling with 5 horse-power as we took turns doing donuts, tearing up the front lawns of new builds meant for yuppies with dirt yards over-lain with grids of expensive sod. We could feel change coming to our small town, rock roads getting paved over, new subdivisions going in where pasture used to be, and more and more traffic coming and going.

My brother, who pinned a Marines poster to his bedroom wall after seeing Schwarzenegger in Commando and Predator for the first time in a sleepover double-feature, would hold his fist up when he wanted us to stop and pull over. He was training to be a military man, and he had the posture for it. We normally only stopped our motorcade to inspect animal carcasses roasting in a ditch somewhere. On one such time I jumped on a bloated deer and went straight through to the guts and was rewarded with a smear of rotten innards across my shins.

But these grocery bags were stuffed with promise. Someone had driven out and placed them on the side of the road with care. We imagined a slump-shouldered husband who had been instructed by his wife to move his attic-stash out of the house.

We killed our engines and made a horseshoe around the bags. From the up-facing covers we knew they held something of our destiny in them, a roadside education that we would quickly move into the stalls of an abandoned horse barn a mile or so away. No one made much of an effort to talk, but after the decision was made to reconnoiter at the barn, my brother bungeed the bags to the back of his kart in a blue milk crate and off we went.

What stands out in my memory now is the silence in that barn. After each of us had claimed an empty stall my brother walked down the central track and tossed magazines over the gates as if a newsie. I found myself alone and sitting in a mash of wet hay that smelled like the bourbon and water my grandparents sipped as they reclined in twin La-Z-Boys choking down cigarettes watching network anchors read headlines.

The magazines were weatherworn: brittle pages that had been soaked in a late May rain and left to crisp in the dry summer air. The pages made noise as we turned them, but the barn was silent, eight boys hidden away, all of us forgetting to breathe. Leafing through those pages, handling them with care, a feeling rose in my stomach and I knew it then to be shame. We were all in the same youth group and this secret held between us became a smirk in public. How thrilling it was to find these bags, and how guilty I felt for being drawn to the pages. My mother was sick with cancer and would die soon. Our family was the central loop in a prayer chain that seemed to be unending.

We stayed in the barn until dusk that first night, until it was time for all of us to head home and take with us the images we'd seen. The magazines would stay in the barn, stashed under a loose floorboard. It was determined we had permission to check them out as if a library book, but any magazine we took had to be put back in the stack.

I returned several times after my mother died. The magazines were always there. When I’d leave I’d apologize to her as if she were floating above me or had been perched on my shoulder the entire time. Then they leveled the barn, scraped it down to a pad to be replaced in time with an ugly brick house. We moved on to R-rated VHS and then someone got a giant satellite dish staked into their side yard and we'd stay up to watch Wayne and Garth on SNL and then switch over to cable after the parents went to sleep. The prayer chain had moved on, and I was in a new loop.

Blake Kimzey's work has been broadcast on NPR, performed on stage in Los Angeles, and published by Tin House, McSweeney’s, and VICE, among others. He is the Founder & Executive Director of Writing Workshops Dallas and recipient of an Emerging Writer grant from the Elizabeth George Foundation.