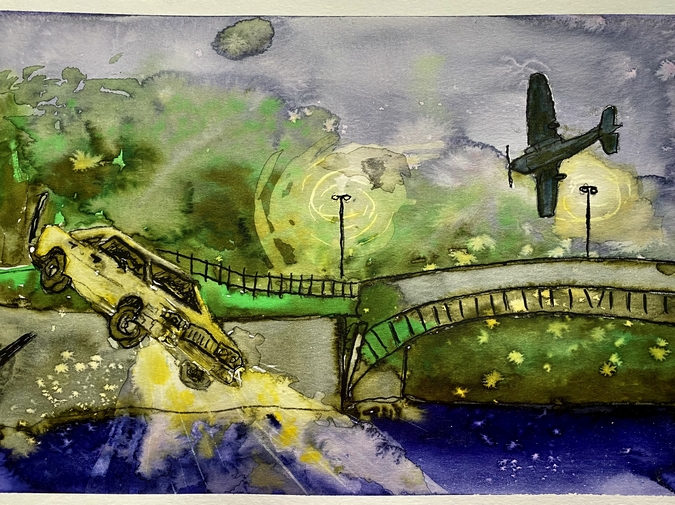 A Terrible Scream: Death and Blow Out

I’ll never forget it. There was a long line of trees to the right of the mound whose trunks had been snapped in half like pencils. The ground was littered with broken glass and bits of paper. And at the top of this mound was the aircraft itself, having come to a final stop at the base of a large tree. A man by the name of David Wright, we would learn later, had suffered a heart attack mid-flight and crashed his Cessna into the woods, crushing his body in the crumpled plane. Had likely been dead before it hit the ground, before the wreckage, the destruction.

We surrounded the area with caution tape and radioed HQ to let them know we’d found it, then for several hours we sat and waited for the county coroner and sheriff to arrive while a dead man lay behind us, trapped in crushed metal. We did our best not to think about it too much. But it was impossible.

Blow Out opens in media res. The camera watches a couple enter a home, then bobs shakily toward a window, clearly the point of view of a serial killer or a stalker tracking the movements of the young teens in the house. It opens so abruptly that it’s not entirely clear what kind of movie this is; it doesn’t look anything like the poster, and John Travolta is nowhere to be seen. It feels more like a recently discovered B-movie VHS, but as the killer stalks the house it becomes clear that this is not the story of Blow Out but the story of something else within that world. Things are not what they seem to be. The stalker enters the bathroom and approaches a naked coed in the shower. The woman screams when she realizes she is about to be stabbed, and the footage finally cuts to Jack Terry (played by John Travolta), who laughs.

“The scream is terrible,” he says.

We’d arrived in Hagerstown, Maryland a few days prior, and slept on foldable cots, the metal legs crossed like Xs beneath stretched olive drab canvas. There were about three hundred of us; the cots filled the fire station’s expansive cement room so it looked like a pop-up shelter after a natural disaster. Most of us slept in our BDUs, not even bothering to change before the morning.

David Wright had left three days prior on a routine proficiency flight to retain his pilot’s license. He never made it back to the airport and was now missing, presumed dead. It was assumed that his plane had crashed somewhere out in the hills—and we were there to track it down. We didn’t know then what was waiting for us.

There’s a casual response to violence in Jack Terry’s profession—until he’s confronted with it personally. After the B-movie footage of the slasher film, Jack listens to various violent recordings (labeled with handwritten notes like “shot,” “body fall,” “cries for help,” “knife sounds,” “strangling victims”) as the news plays in the background.

Jack Terry is a sound effects guy. He’s built his life around the recording and use of sound effects, particularly for movies. He is a perfectionist of sorts, appalled by the bad and unsatisfied with the good enough. Early on in the film, Jack takes his equipment out to record some additional sounds. He stands alone on a bridge, holding a shotgun microphone that looks more like a magic wand, and takes in various sounds: leaves rustling, a frog sliding into water, an owl. In the middle of this, he records a couple below him. They see him almost immediately, and the woman says, “There’s someone on the bridge. He’s staring right at us. I don’t want to be here anymore.” Finally, from somewhere in the darkness: tires squealing, the sound of a blown tire or perhaps a gunshot, and a car crashes through the railing and plunges into the river below.

When we woke the next morning, each ground team (consisting of around eight to ten people) were assigned different areas to search. Topographical maps were spread on the hoods of white vans as the intricacies of the terrain were explained in more detail. There was a solemnity to it, a realization that time had almost certainly run out.

I had joined the Civil Air Patrol about three years prior, right after I’d turned fifteen. I had some friends who joined at the same time, and in the post-9/11 world of the mid-2000s, this seemed like something I ought to be doing with my life. The Civil Air Patrol, if you are unfamiliar, is the US Air Force Auxiliary, and handles something like 90 percent of inland search and rescue missions in the continental United States. It is militaristic in its structure, operating in some similar ways to ROTC. We trained for real-life situations, utilizing equipment to track ELTs, or emergency location transmitters, that would transmit a signal if anything happened. This signal is often hard to track; it will bounce around the surrounding area, made worse if the terrain is especially mountainous. It takes a lot of time to figure out if you are tracking the actual signal or merely its echo.

Colonel Thorn collapsed the map and sent us on our way. My team was tasked with searching a place known as the “punch bowl,” a ring of mountains surrounding a valley. If David Wright had crashed in there, it would be almost impossible to track the signal; we’d have to find him on foot. Our assignment was to comb the entire area by foot if necessary. We climbed into the van with our equipment and set off for the mountains, calibrating the instruments and preparing for a long day.

When the car hits the surface, Jack rushes to the scene and dives several times to save the occupants. There’s a woman in the back, pounding on the window as the car fills with water. Jack grabs a rock and smashes the window, pulls her to the surface. The two find themselves at the hospital, hounded by state and federal agents desiring to keep this quiet: the man in the car who died was Governor McRyan. For the sake of his family and reputation, they don’t want this to get out. The woman in the car—Sally Bedina—was an escort, and it would destroy his legacy if word got out. McRyan was a presidential hopeful, and seemingly the odds-on favorite to win. “That stiff on the stretcher was probably our next president,” one cop says.

David Wright’s plane—wherever it was—was not transmitting any signal as far as we could tell, though we nevertheless brought all the necessary equipment with us up the mountain to track one should it appear. It was bright and clear, the sky a deep and undisturbed blue as I recall, the spring air still having the hint of a chill to it. We climbed up the outside of the punch bowl mountain ring, and then back down the other side, towards the valley, pausing after several hours on the mountainside to eat lunch, sitting on rocks and not thinking—for a moment—about what it was that awaited us. In that moment, our mission was simply to stop an errant signal.

As we ate, a voice came over one of the radios. It was hard to hear with the heavy static, but it was clearly not someone from our group. They asked if anyone was out there, and gave coordinates for their location. We quickly tracked them on the map—they were down in the valley below us. We responded over the radio, and the voice told us he’d found it.

We rushed down the mountain and into the valley below. When we arrived at the coordinates, to our left was a large mound. A man and a dog walked towards us and away from the scene. He said his brother had already left—that the pair of them had gone searching on their own, that they had happened to come across their dead father, the first to see him and confirm his death. We took his information and the man, as he left with his dog, seemed both grateful for our presence and glad to be getting out of there. I remember wishing I could say something to him then that would bring some form of comfort, but as he walked away all I could think to say was, “Take care,” and we moved on to the crash.

Throughout the film, Jack Terry replays the audio and video footage of the blow out over and over and over, straining to hear the precise moment when everything changed, when the tire blew or was shot and the car went into the river. By the film’s end, Sally has been killed—strangled to death as part of the cover-up of the cover-up of McRyan’s death—and Jack has inadvertently recorded her final scream. He uses this terrible scream in the B-movie footage, covering his ears in the film’s final moments as the producers replay it over and over.

When I got home after the crash, I looked up David Wright’s obituary. I’ve thought of it often over the years—everything, really, but especially the sudden sinking realization we all had when realizing that the man who’d found the plane was David Wright’s son. I read and reread David Wright’s obituary, attempting to fully take in the story of a life in a few paragraphs. I can’t get it out of my head, even all these years later. In this way, I’m just like Jack Terry, replaying the footage of the crash: if he could only figure this out, everything would sort itself out, reality would be restored. He thought that if he could just put the pieces together correctly, life would go back to normal. But it can’t. That car will be forever suspended in mid-air over the dark river beneath, ready to fall, to crash, to die, to change everything.

Austin Ross's fiction and essays have been or will soon be featured at Necessary Fiction, Lost Balloon, Still: The Journal, and elsewhere. He is an editor at Flash Fiction Magazine and an editorial consultant at CRAFT Literary, and lives near Washington, DC with his family. Visit www.austinrossauthor.com for more or follow him on Twitter @AustinTRoss.