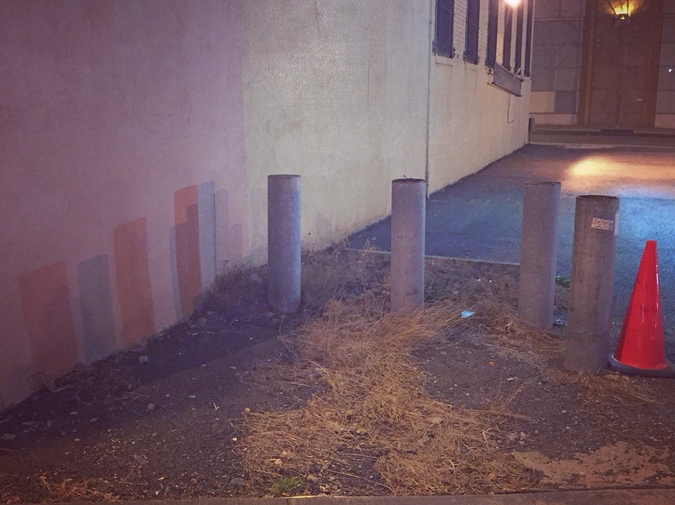 On the ten-year anniversary of 9/11, one month and twenty-eight days before you traveled to San Francisco and jumped from the Golden Gate Bridge, we sat on the balcony of your penthouse apartment, tucked safe and high above the watchful eyes of your neighbors, and smoked cigarettes.

I had refused to drive from Manhattan to Brooklyn like we often did at night. Over the Manhattan Bridge, down Flatbush Avenue, to the cool dusk of Prospect Park, where our dogs could run, really run, their paws drumming through the grass, their bodies hunched and barreling.

There’s going to be some issue with the bridges, I said. I don’t want to get stuck in it. Either they’ll block them off, or someone will actually try something. I mean, what better, more symbolic time?

That’s not going to happen, you said. It’s just not. And if it does—fuck it! We’ll all go down together!

You flung your fist to the sky, the way you did when the dogs ran, crazy, through the park. Their impossible speed made us hold our breath, the nighttime dew cool on our ankles, soaking our shoes.

We have so many more things to do together, I’d think. So much is terrible—sure. But isn’t this something? Isn’t there some kind of hope here?

I thought you were leaving me behind in these statements. But maybe you knew what I didn’t. If we all went down together, a sudden zzzjjooom, a crackle, a flash and then blackness, there would be whatever comes next.

All for one and one for all, is what you were saying. Either a nothingness that swallows grief, or endless togethers, all together. Nobody left to cry over it. Nobody left behind.

Lights flickered in the windows of your neighbors’ apartments, everyone watching the same memorial, the same public parade of sorrow.

You twirled your long braid around your finger. You had the sort of hair princesses cast out the windows of castles. The kind girls cropped close when they snuck off to war.

What was that movie where the kids were all deaf, you asked suddenly. They put on a performance. They sang Rang-a-rang! Clang-a-clang-clang—something like that?

I laughed and choked on the smoke from my cigarette. I always finished before you. I held the butt in the palm of my hand. I looked up at the sky.

I remembered the movie, but I wasn’t going to say so. It had been about something terrible. A man wanted to date a deaf woman who’d undergone trauma. He became enraged when she wouldn’t lip read. She’d only sign.

You smoked your cigarette down to the filter and held up the jar with its sludgy remains.

Here, you said. Put it in. Ladies first.

I waited for these little things. It was like the way I had my own lighter, but sometimes I’d pretend I didn’t. You’d reach over, just like this, your hand grazing my chest.

You coughed and coughed, the way you’d been doing for weeks. You’d been smoking maybe a little more than usual, you said.

Your cough had evolved into a storybook sound. A deep, heavy rattle, like a cough written on paper.

I hated you a little, then—like something weak and sick in you had finally come up to the surface, and I was supposed to pretend it wasn’t there.

I was afraid for you, and ashamed, and angry.

I was envious of you, too. The bad things you did to yourself actually had a tangible effect.

Ahem! you wheezed, covering your mouth with your hand. Ahem-hm! Ahem!

Shut up! you said. You laughed a little, but then you hunched your shoulders. You hugged your arms around your knees.

I was immediately sorry. I held the door for you. I offered you the rest of my iced tea. I proposed three different plans for the next day, each one more intricately-crafted to suit your interests. I couldn’t have been more obvious.

We sat on your couch. I tried to get you to watch another episode of Twin Peaks.

You hadn’t wanted to, ever since the one where she talked about her arms bending backwards.

I clicked through the channels, until RuPaul’s face filled the screen. In Season Two, the camerawork was choppy. Colors on the screen seemed too orange, too pink.

This is so low-budget, I said. It’s making my eyes hurt.

Leave it, you said. This one’s my favorite.

In other, slicker reality shows, housewives and sorority girls pretended not to know they were being filmed. But their dreams of fame and notoriety were written, glassy, in their back-and-forth eyes.

In this one, the drag queens did it up. They mugged for the camera, instead of pretending they were just girls out on the town, caught unaware. RuPaul banished them at the end, one by one.

Sashay away! she shouted, her lips pulled back in glee.

Sashay away! we said, pointing at our dogs as they unleashed acrid gas in their sleep.

When we muted the TV at a commercial break, muffled noises we’d ignored during the show resolved into distinct booms.

Do you hear that, we said.

That can’t actually be fireworks?

We squinched our faces, glared into each other’s eyes.

Fireworks? On the anniversary of 9/11? Really?

We stood in the middle of your living room, our heads cocked to the side. Our dogs curled into each other, oblivious, twitching and dreaming.

Sometimes I’m so slow and stupid, you said. Like our ears are going to sniff out this mystery. We humans kind of rely on our eyesight, after all.

In a flight of inspiration, we slammed out of your apartment. We pounded up the emergency stairs to the roof.

NO ENTRY, said a sign on the door, but we pushed through anyway.

We ran to the edge and clung to the rail. Another boom, then a quick spattering, a rat-a-tat-tat.

There, you said, pointing.

Bright colors lit the awning of the deli across the street where we bought our iced teas and cigarettes. There were hard-boiled eggs in a bowl on the counter, hand-lettered signs.

You knew how much I hated those signs. Quotation marks and apostrophes, always misused. All of them in the wavery, jutting hand of psychopaths.

I have the handwriting of a psychopath, you’d say. Sometimes I look at something I wrote the day before, and just look.

But your handwriting surprised me for the opposite reason. It was rounder than mine. It made me think of gingham, calico, dried flowers. I didn’t understand the jagged lines of my own letters—their swoop and sharpness—against the sweetness of yours.

After all, weren’t you supposed to be the one whose life was going worse?

In the letter you wrote me, the one I received the week after you left New York and did not come back, your cursive was faint and lovely.

I love you, you wrote. Hurting you is the thing I most regret.

It was like cobwebs and lace, pressed in pages.

Lights sparked and burned around us—pinks, greens, gold. Heavy rhythms beat through the sky and ricocheted off of buildings, bounding through my chest, buzzing in the base of my spine.

Fireworks on 9/11? I said again. Really? Who would ever agree to that?

Oh, you said. The song from that movie was ba-boom-a-rang-rang. That’s it.

You touched the railing and turned away. You had told me once you were afraid of heights.

I forgot my keys inside, you said.

You rattled the door.

Alyssa Proujansky has studied fiction in Ithaca, London and New York. She was recently a runner-up in contests held by Atticus Review and Psychopomp Magazine, and a finalist in Third Coast's 2018 Fiction Contest. Her work appears or is forthcoming in Passages North, Third Coast, Columbia Journal, Moon City Review, Atticus Review, Psychopomp Magazine, Flock, Lunch Ticket and elsewhere. She lives in Brooklyn, where she is at work on her first novel.