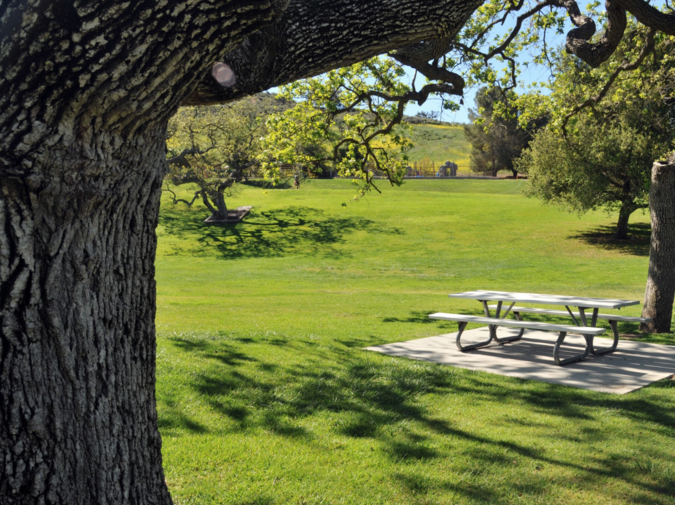 She had remembered the refillable butane lighter. Packed the compostable plates and spoons, and the cake knife. Segments of wooden train tracks spelled out her son’s name on the gift table, and a piece of duct tape secured their picnic area reservation under the yellow tablecloth.

It had been only a little daring to plan a park birthday in September in Southern California. She found clear sky outside their bedroom window that morning rewarding her bravery. There was a breeze, with gusts, but it was good enough. The children dug in the sand, chased each other up the stairs of the slide, climbed up the polka-dotted pink and violet plaster hippo. No one cried.

Hard to fathom that Ludwig was four. Dan had promised that they could move back to the City by the time their son was ready for kindergarten. At first, she was able to find satisfaction in her teaching, playing duets with her violin students. Lately, however, her hunger to find an ensemble had intensified to the point of famine. Her violin teacher in college had been a member of the LA Philharmonic. She was strong, self-sufficient, worked hard, and played with grace, precision, and affection. A role model. Helen had dreamed of one day winning a chair in the orchestra herself, even though her old teacher had since retired to Australia. Helen had begun taking auditions and had gotten some gig work through friends. But when they moved over an hour south of LA for Dan’s job when she was pregnant, Helen’s dream stumbled out of view. She craved a regular quartet, a chamber group, if not an orchestra, with concerts and rehearsals and a professional community. Now kindergarten was only a year away. The quartet felt further away than that.

“My job isn’t as portable as I thought it would be,” he’d said the night before, after Ludwig was asleep and after she set the bag full of everything they needed for the party by the door. Their own gift lay next to it, a half-size violin like hers wrapped with a two-inch-wide blue ribbon secured with a large bow.

“The City is a big place,” she replied.“Maybe you could start asking around?”

“You’re not hearing me,” he said. “The company cares. They gave me stock options, and now I’m pretty sure I’m going to get a raise in January. They have an in-house chef that makes fantastic lunches for us. Massages every Friday. I feel like they value me.”

“That must be nice,” she said. She rubbed her fingertips together. They were still stained blue from making frosting.

Playing in an ensemble, when everyone listened carefully, made their adjustments to intonation, to phrasing, to match each other, the blending that came from that deep, shared focus made her forget any disappointments and problems, at least in the moment. Dan held the hanger with his shirt for tomorrow, evaluating the look of different ties from the closet against the shirt’s small check pattern. She put on her headphones and listened to Mendelssohn before falling asleep.

It hadn’t occurred to Helen to invite any of her students or their families. Her small studio of students paid for their groceries, but once the players showed any promise, the feeder teacher for the youth orchestra, who grew up in the community, sniffed them out and snatched them. Although she did care for her students and their musicianship, the slog of teaching caused noticeable flares of resentment. Feeling like she only gave—to her son, to her husband, to her students—made her feel like a near-empty ATM. She eyed two members of Dan’s team of programmers who had come, braving LA traffic and sacrificing their Saturday. They stood with Dan under the pergola by the picnic table eating quartered tuna sandwiches and seedless grapes.

When it was “Happy Birthday” song time, she asked Dan to call the kids to the table. A smiling train engine traveled at an angle across the cake’s surface, featuring the engine’s grinning face. Their neighbor two doors down was trying to start a baking business now that her youngest of four kids was in high school. Helen had wanted to bake the cake herself and asked the neighbor for a lesson, paid her to tell her what to do and to take the lead on decorating. The neighbor had never watched the train show, couldn’t sing the theme song, hadn’t sat on the floor for what felt like days and pushed an overpriced blue-painted train around a wooden track that was made in China. After he had begun to use words but still couldn’t tell her what was wrong, when he wailed, she would take out her violin and play the theme song from his train show. The crying would stop. She cursed when she found herself humming the theme song afterward. She would blast the classical music station to try to chase the earworm away.

The resemblance of the train on the cake to the beloved tank engine character wasn’t as strong as if she had gone with the popular cake shop in town, the one who did the cakes for most of Ludwig’s classmates’ parties, the one who charged a fortune, more than what they had paid for the student violin. The  eyebrows were too wide, and the smile was full of oversized teeth. Also, he shade of blue was too dark. Helen had mixed it herself but added the color with the intrusion of a competitive zest, seeking vibrancy and wanting to show herself that her violinist upper arm had at least as much strength as an arm muscled with whisking and stirs.

Ludwig saw the train and bounced in his seat. His friends joined him at the picnic table bench on their knees, leaning on their elbows in anticipation of frosting and cake.

“Happy Birthday, dear Ludwig!” the kids sang. Helen clicked the lighter a second time. Her hair blew into her mouth. She wiped it out with the back of her hand. The first candle’s flame had gone out in the wind.

Helen had stuck four thin candles below the train’s body. She held the lighted tip of the clicker to the base of the first wick. “Light, you dimwit,” she said. She loved to swear, but had conditioned herself not to do it in front of kids, or at the very least not in front of other people’s kids.

The entire table of young eyes blinked in her direction, mouths open like baby birds, waiting for the dessert to arrive.

The forces working against success were too strong for one person: the insistent breeze, the temperamental clicker, the short-wicked candles.

When she was a child, she believed in magical thinking: making a wish while holding your breath in a tunnel, huffing a fallen eyelash from the back of your hand with eyes closed, and blowing out birthday candles every year. She thought the trick ones that lit back up were a crime, robbing the blower-outer of the chance for a wish. Driving through a tunnel — sometimes — she still considered holding her breath. Her wishes had become more abstract, less fervent — framed as intentions rather than giving up power to magical forces. If she inhaled before the end of the tunnel, she regretted it afterward.

“Let’s put it back in the box, so it’s more sheltered,” Dan said.

She had already assigned him the job of photo-taker, but he had to put down his phone to hold the lid of the box partly open, like a windshield while she clicked again.

One candle lit, and he nodded with what looked to her like pride. After the second one followed, he slipped his other hand under the box to help carry it over. After Helen got four flames started, she grasped the bottom edge of the cake box.

Together they shuffled to the kids’ table. They watched their feet to prevent a stumble. They scanned the spot in front of their son, both seeing that there was room for the rectangular cake. But between careful steps and the shifting, Dan lost his grip on the lid, and it touched the row of candles. A gust fanned the burning lid enough to make the flame catch and grow. Dan noticed first and yelped, letting go. Helen felt the imbalance, then saw the flame. Her instincts said, sand, not grass. She lobbed the entire thing into the sand by the slide, and the cake landed with the sound that the couch made when she hurled her body on it after her last lesson of the day.

In her high school youth orchestra, she had played as a soloist in the first movement of a Mozart concerto. During the dress rehearsal, before he began the piece, the conductor asked her in front of everyone, “In the concert, if a string breaks, what do you do?” She had gathered her concentration and tamed her nerves for the rehearsal—she hadn’t prepared for a pop quiz and didn’t appreciate the question. When she failed to respond, he turned to the orchestra and asked, “Anyone?” The concertmaster stood from her position to the conductor’s left and with mock urgency performed the answer: she shoved her own violin toward Helen.

Small cries of “Oh no!” and “The cake!” came from the children, who watched from the table, colorful cones strapped to their heads, the thin elastic string pulling on the skin under their chins.

Helen hadn’t packed a fire extinguisher. Dan was about to kick sand on the flaming mess, but Ludwig ran to it. He bent over the fire that had destroyed most of the lid and motioned with one hand for his friends to join him. And he blew. His friends ran to him and leaned over the sandy, burning cake, making a wish as they helped him blow.

Nicole Nelson lives in Southern California. She holds an MFA from Bennington Writing Seminars and a PhD in linguistics. For several years, she was a co-host on “Writers on Writing” on KUCI-FM in Irvine. She is at work on a novel.