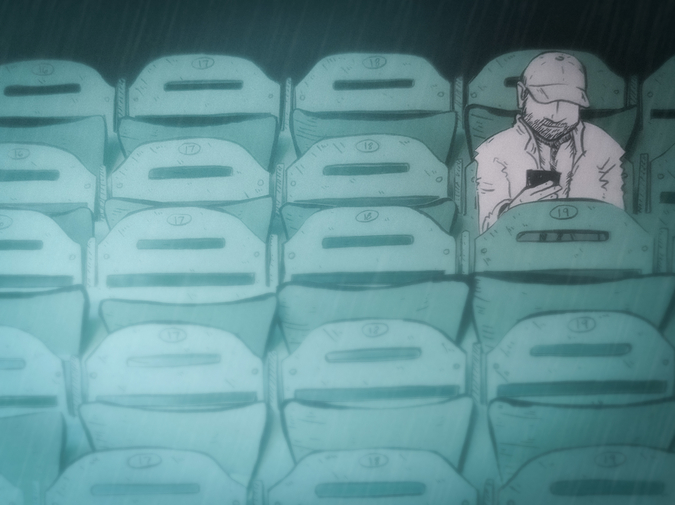 The world and weather are telling us they’re not ready for baseball, but I choose not to believe that. It’s too cold to call this rain, but too wet to classify it as sleet. I’m prepared for the chill and wet, but half-assedly so — a windbreaker over a fleece vest, and a Sox hat — the old logo from when they should’ve made the Series, back when I was like 10. Or when my buddy, Hayes, was 10; I didn’t live here yet.

I’d pushed past the usher on the way in. Didn’t show him my ticket, but he didn’t really look for it. It’s empty. Sox are warming up, and I look out to right. The backup catcher is in foul territory, throwing with someone I realize at that moment isn’t Maggs. Ordonez is on the Tigers now, and I’m annoyed at myself for forgetting. He was a rookie when I first moved to town. I always told myself I liked him because I played right, played like he did. The only distinction being he’s actually good.

Ahead of me, to the right, are a father and son, almost in the middle of the empty section. They seem to have taken great care to sit in their two assigned, purchased seats. The boy has a program in his lap, and a short golf pencil at the ready. Every minute or so, he wipes wet off the scorecard. It continues to accumulate. When a play begins, then ends, the father points over, draws with his finger how the son should document it. My father used to do the same thing. I think I threw those old scorecards out my last apartment move.

The father looks over his shoulder at me, gives a wave like he knows me, then puts his hand down quick, like he’s embarrassed.

“No work either,” the dad says. “You have friends coming?”

I take out my phone, pull up Hayes.

I’m at Comiskey now. Where are you?

Section 301. J/K, he texts back. Good for you not calling it the Cell.

You guys should fly out here for next year.

Fuck no. You know how cold it is there, he responds. “You’re the one who grew up here,” I think, but he knows that already.

I don’t write back LOL, because I never write that, but I do actually laugh. The dad up ahead turns around with a smirk, like he wants to know why. We’re watching the same shit on the field, after all, nothing out there was funny. I give him a little headshake and blink like I’m the one who’s weird.

My brother may be there. Look for him.

Not up here in our normal spot, I write.

Every out, I can see the kid tense a little more against the weather, see him lapse in recording the last play in his program. “4-3,” I whisper, knowing this weather breeds ground balls to second, numb hands for everyone involved. I remember that 9-volt battery sting from each contact between bat and ball. I kept putting my tongue to those battery nodes until I was out of my depth with nowhere else to play. I wonder if being here, in the unripe, unwelcoming part of the baseball season is going to help this kid learn to love the game, or the new right fielder, or whatever will keep him coming back. If his father got him here today, I can’t imagine he won’t get him to come back next year too.

I start over: There’s a little kid and his dad here. I’m hoping they storm out on the field shirtless like those guys did a few years ago. You were here for that, right?

It made the news here and all over. A father and son — probably just drunk but people here loved saying they were on PCP — hopped the outfield fence and ran as far as they could till stadium security said, ‘that’s enough.’ Said it with tackles and headlocks out in the outfield. I’m pretty sure Hayes and I were here for that together. I used to never be here without Hayes.

Geez, which time? the reply comes back.

I don’t laugh this time, but do type LOL, even though it feels cornball.

I get up, at first to leave, but when I look at the kid, I tell myself I’ll stay and just get something to eat — a soft pretzel, whatever the closest beer they have that pairs well with bitingly cold, wet weather. I stop under the overhang and pull out a cigarette. Here, I’m safe from in-between weather — moments I could feel the flakes on my cheek but not see them and those when I could see them fall but not feel them against my skin. Here, I can still see the game. If the kid insists on making his dad leave, I won’t feel guilty. I can bounce and watch the rest of the game in a bar back up north in the part of the city where I live. I pull my phone back out, type out to Hayes, What bar are you at? But I backspace, backspace, backspace again and wait for the kid and his dad to push past me and head for the exits.

Mike Prask lives, works, and writes in the suburbs north of Chicago. This is his first publication. He can be found on Twitter at @whateverprask

K. Sekelsky is an illustrator/designer/writer living in Kent, Ohio.  Her work has been published or featured by the Pittsburgh Pirates, ESPN.com, and Nature (magazine). She loves drawing birds, building dioramas, and competing in trivia contests.