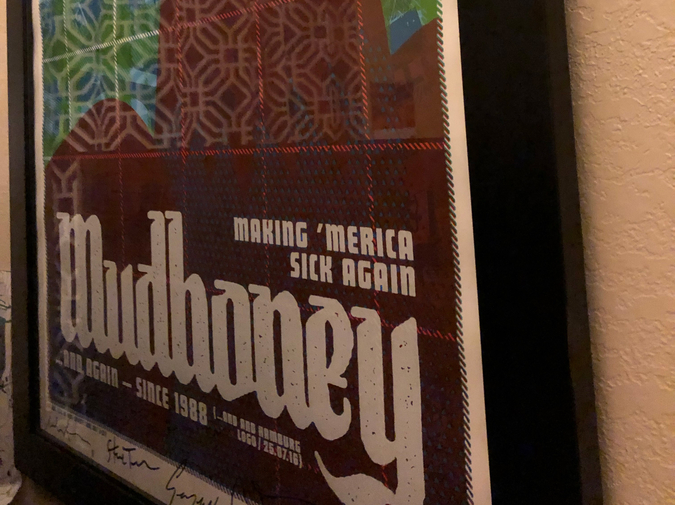 You’re not supposed to start liking a band that’s nearly 30 years old when you’re 38 and hurtling towards middle age. No, you’re supposed to like what you like, and not go on changing anything. Back in ’88, you were a snot-nosed fourth grader taping Guns N’ Roses off the radio when your parents weren’t around, and you had no clue that a band called Mudhoney was jamming in Seattle, stoking the embers of what would be a musical explosion. You also didn’t know that, in a few short years, your parents would discover your stash of illicit hip-hop and hard rock tapes. Your dad would listen to a select few, and in the absence of anger, he would be consumed by disappointment and shame. The tapes were to be destroyed, and a few weeks later you would find yourself at the end of a church service, the shame all yours now, walking down the aisle during the invitation. Tears clouding your vision, you choked out the words that you needed to rededicate your life to God. The preacher announced you had come forward for salvation, and all you could think was no, you didn’t need salvation, because that’s something you got years ago, at the age of six. You knew this because you remembered it, and because the preacher that came to the house clearly marked in the bathroom guest book one of the reasons for his visit:

When you were about 35 you started, for the first time, to question spirituality and that old-time religion. You read True Spirituality by Francis Schaeffer, and felt encouraged. Encouraged that God is real, but also encouraged to break your beliefs down to their core, and start at the beginning. As Schaeffer did, to go back to agnosticism and examine your faith, not sure of what you would find.

Now, here you are, a couple years after getting into Mudhoney. You’re 40 and in the early stages of middle age. You anticipate the release of Mudhoney’s new album like you used to anticipate a new Guns N’ Roses song on the radio. Instead of a boombox and blank tape, now you’ve got a computer and mouse. When you see that Digital Garbage is available for pre-order you slam down on that mouse like you used to hit the record button back in the day, making sure the order goes through. You come home from work a few days before the release date, and the record is waiting for you at the door. You put it on and aren’t disappointed. Mark Arm is railing against paranoia, gun violence, and online culture with the irreverence that you expect from him. You flip to the second side and get hit a little harder. In “21st Century Pharisees” Arm is calling out the faithful among us for “laying hands on a pile of shit” and endorsing D.J. Trump, our unfortunate president. At the end of the song Arm shouts:

He doesn’t give a fuck about your Jesus

He doesn’t give a fuck about your Jesus

And it’s clear that you

And so it is, a guy called Mark Arm, raised a Lutheran and forever a punk rocker, illuminates the situation. You’re not in a state of unbelief, but this American Christianity, this old-time religion that is so tangled in nationalism and hypocrisy, sure has left you in disbelief as to what it has become.

Drink:
The cheapest box of Chardonnay you can find.

T.L. States lives in Tucson, Arizona with his wife and daughter. Other than Hobart, his work can be found at Philosophical Idiot, and he can be found on Twitter as @epmornsesh.