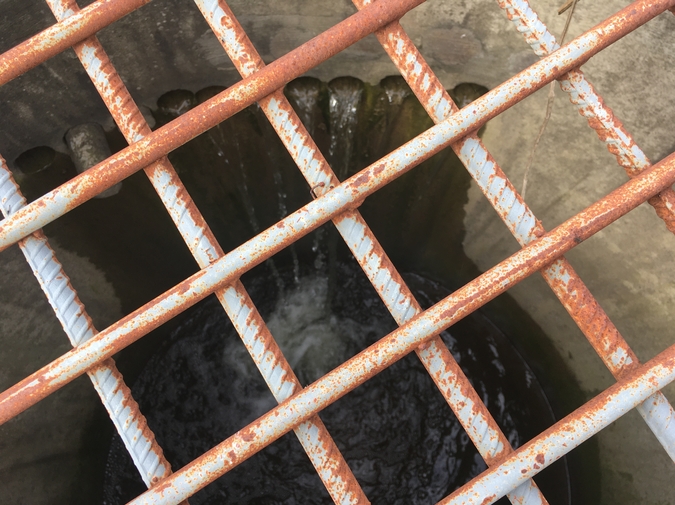 Gretchen nearly concusses herself on the bedpost. With the aggressive apathy of a balloon, she dresses as a standup citizen.

Homemade jams and hypnotherapy tapes parade themselves around her lazy susan. She hears the somewhat performative murmurations of Atom, her tamed groundhog, under the stairs.

There’s a commotion outside in the street. She latches her door and prowls around the corner, glomming onto the horde.

A man dislodges from the group and settles on the opposite sidewalk.

At 9:15, he extracts a receptacle from his pocket, removes what may or may not be a breath mint, and places it atop his tongue.

At 9:17, he fiddles with the buttons of a camera around his neck.

Gretchen edges around the others for a better look at him. He looks familiar. She gives him a good once-over and he takes a photograph of her at the same time. While her head is still turned, gaspings and cheerings crackle in her right ear.

The highrise three blocks over has disappeared. She missed the entire implosion, the whole reason for being out there, she can say that with certainty.

The man’s leaving. She crosses the street, keeping him in view. He passes behind the first plaza, the second plaza, the diner, then the mall. He enters a warehouse. The door isn’t locked when she catches up.

The warehouse is completely dark. She holds her arms out and centers each step in her metatarsals.

Gretchen places one palm in front of her face but it might as well not be there so she returns it to an outstretched position.

She follows his whistling.

Eventually, he slips through a back exit into daylight.

She has to fondle the wall for several minutes to find his escape, but his figure’s still visible through the parking lot, a courtyard, and finally an apartment.

Nothing appears alarming as she scans his nautical-themed floor plan. She notes a life preserver and a dinghy amid other oceanic fakery on the bookshelf. He does seem like the kind who’d consider life preservation a formality.

The man eats a meatball hoagie on his balcony while she sorts through his personal effects in an orderly fashion.

In the third drawer on the left, she plunders his diary. Gretchen knows the only secrets actually kept are failures. Her fingerpads trace the trail of them framed in college rule. This record of humiliations taunts the overly ambitious.

She skims until she reaches the good stuff.

Not that anyone ever asks, but would you believe it, Valerie has put some kind of a curse on me. A real one.

She’d read the rest tonight over a glass of Canada Dry and a fresh Zebra Cake, like always.

Moving to the bathroom, Gretchen collects a sample of toe clipping specimens into a vial.

She chucks his toothbrush out the window. There’d be no more use for it after today.

His housemate mewls beside his shin because his housemate is a cat. The man is standing in the hallway.

“Coley, this is unacceptable.”

Gretchen sees him clearly now. Her dentist crinkles in perturbment.

Without her asking, he starts explaining.

“Here’s the thing. You can’t be doing this. You’re 38 years old. You’re a compulsive liar. You have cavernous molars. And you’re already being tailed by the police.”

Gretchen picks up his floss and gets to work.

Her bleeding gums are a dead giveaway.

“And I’m just using the name on your chart. Who knows what you really are.”

The cat purrs, not reading the room.

“What’s your excuse?” she says.

“Come on. Not that you need to know, but I have an appointment with my dentist.”

“I thought you were a dentist.”

“And you don’t think my molars need to be scraped every six months?”

Gretchen thinks, despite it all, they have become something like friends.

“I hope we can remain companionable.”

If nothing else, she thinks she can colonize elsewhere with like-minded individuals. There’s probably a whole community of people taking identities that don’t belong to them. We’ll swap lives endlessly until there’s no trace of us left, she dreams.

Claire Hopple is the author of two story collections and one novella. Her fiction has appeared in Hobart, Vol. 1 Brooklyn, New World Writing, Timber, and others. More at clairehopple.com.