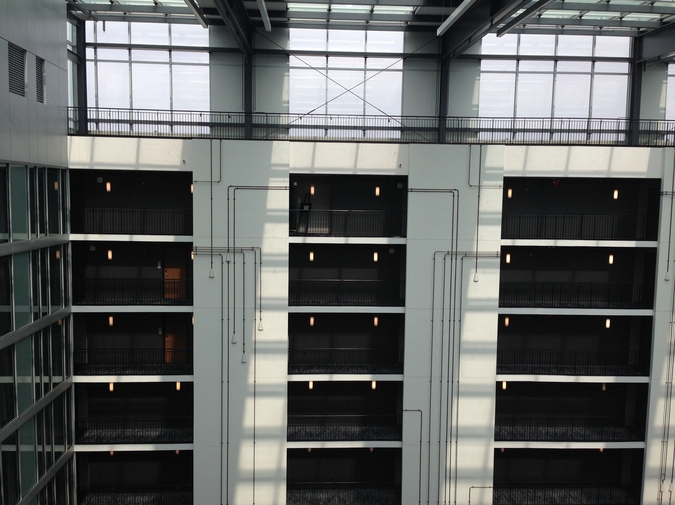 Emmy vs. the Bellies

Emmy was pissed about the bellies. I mean, we all were to some degree. They were ugly and heavy and covered up our new school clothes. The letter to the parents said they were supposed to help us understand the weight of our decisions. Cam said she was more confused than anything. She hadn’t gotten her period yet, so how could she even? Gabi said that at least we knew the school hadn’t started monitoring our cycles. Yet.

So yeah, none of us were happy about the bellies but Emmy was pissed. She said it was stupid that the school used grant money to buy fake pregnant bellies for all the freshman girls. They could have reopened the arts wing or hired an actual health teacher to teach actual health. She said it was even more stupid—so stupid and unfair—that all the boys had to do was watch the Lifetime original movie Too Young to Be a Dad in the auditorium and do a worksheet.

Emmy said that she would not rest until she got rid of the bellies. She slammed her fist into her palm to emphasize “rest.” When Gabi asked, how? She said sabotage, wrapping her mouth around each syllable like a hard candy. She said, the less you know the better. Plausible deniability. Emmy had always been the bravest of us. The loudest, the bossiest, the one who knew things the rest of us didn’t. When she said she was going to do something, we believed her.

We’d only been wearing the bellies a few days when Stephen Cooper’s mom created a petition to make us wear something over them. Mrs. Cooper said the boys should not have to be confronted with our lumpy cotton-stuffed bellies and sand-baggy breasts in bio lab and language arts and algebra II. Poor guys couldn’t concentrate on their school work. She posted her petition in the Panther Parents Facebook group. It took less than 48 hours for an email to go out mandating that girls had to find shirts that could cover them or they would be forced to use their study hall to sew maternity tops. It took Emmy less than 20 minutes to ride her bike to Community Aid and find us all XL t-shirts. “I Survived the Sooper Dooper Looper” shirt for Cam, a green “Girls on the Run” 5k shirt for Gabi, and for me, a shirt from the “Spend the Night with Alice Cooper” tour. She kept the bright pink “I Stand With Planned Parenthood” shirt for herself. She served out a week of detentions for inappropriate attire. Cam left a note in my locker: is this the plan? I wrote back: idk??!!

Emmy was pissed about the boys and the petition and detention. She was pissed because the bellies made it hard to do sprints. But then we got used to the weight. After the first month of running drills with the bellies, the whole team was pulling six-minute miles. Emmy said they were the best thing to happen to the Eastern High Lady Panthers JV field hockey team since Playtex Sport tampons. Coach said that if Emmy kept it up, she’d make varsity next year. All of us would.

Our bodies were changing under the bellies, because of the bellies. Our round little bellies, our actual bellies, were firmer, flatter without the baby fat. Legs felt longer, stretched by new muscles. Our arms were lean, but biceps bulged when we picked up our backpacks or closed our lockers or tackle-hugged when Gabi scored her fifth goal in three games. We were getting stronger, and it felt like a secret. We were getting boobs and hips and pubic hair. That felt like a secret too.

When Emmy started mixing buckshot into the stuffing of her belly, claiming it was to increase resistance, I thought, this is it. When she gut-checked Central’s forward in the last five minutes of the game, I thought, here it is. When the athletic trainers were strapping the girl to a stretcher and Emmy, who was suspended for the rest of the game and probably the season, yelled over her shoulder “I stopped the fucking game-tying goal!”—I tried to beam it into Cam and Gabi’s brains: the plan.

Coach wouldn’t let us talk to Emmy after the game. He made her sit in his office while the rest of us showered and changed and helped each other back into our bellies. There was a message from her that night in the group chat that said “no bellies tomorrow. the plan worked xoxo.” We texted back “yayayayayay!!!!!!” and “get it girl!!” and heart emojis and popping champagne emojis and the smiley face wearing a party hat emoji. Cam messaged just me, “what are we going to do now???” I texted back, “idk.” Gabi texted, “i’m gonna miss my belly, don’t  tell Emmy.” I texted, “so will i, bb.” I texted, “don’t worry i won’t.” I texted, “ i have plan.”

Meghan Phillips is a 2020 National Endowment for the Arts Literature Fellow. Her flash fiction chapbook Abstinence Only is forthcoming from Barrelhouse Books. You can find her writing at meghan-phillips.com and her tweets at @mcarphil.