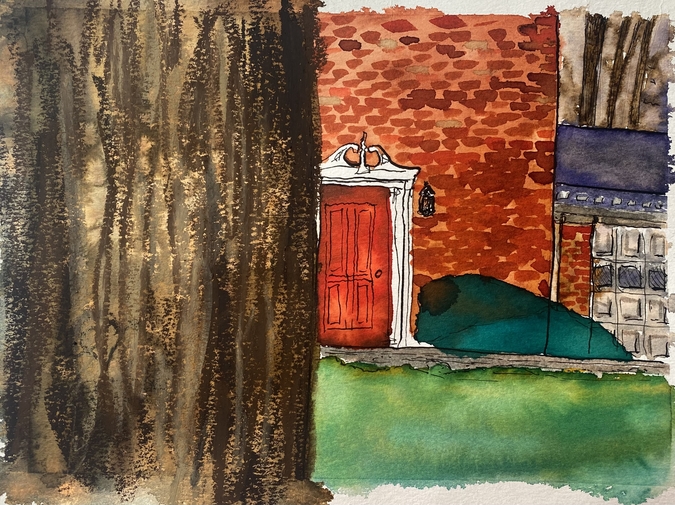 Everything Matters: The Future and Prisoners

In the summer of 2017, my wife and I drove from Philadelphia to New York City for a weekend family reunion. She was seven months’ pregnant with our first child—in the third trimester but still far enough away from the due date that we felt safe enough to travel. When we arrived, we booked an Airbnb across the river in Jersey City and met the rest of the family at a hotel in Manhattan.

On the last day of the reunion, as we walked back to the hotel after touring the city, my wife felt some odd stomach cramps, but we ignored them. Later that night, around 2 a.m. at the Airbnb, her pain became excruciating. We called the midwife, who told us that we needed to find the nearest hospital immediately.

The baby, two months before term, was coming.

Keller Dover is a man gripped by a very American paranoia.

At the film’s beginning, after his son Ralph kills a deer while the two are out hunting, he tells him on the drive home: “You know the most important thing your granddad ever taught me? Be ready. Hurricane, flood—whatever it ends up being. No more food gets delivered to the grocery store, gas stations dry up. People just turn on each other and all of a sudden all that stands between you and being dead is you.”

I’d imagine that we’ve all met or heard of someone like this, someone who has a basement full of prepper food buckets from Jim Bakker or some other grifter: fifty-five-gallon drums of powdered eggs and freeze-dried meat and rice and beans. If Prisoners were set just a few years later, Keller Dover would undoubtedly have had a “Don’t Tread on Me” flag hanging from his porch. He is the sort of man who thinks he knows everything, can fix everything, is ultimately in control of everything—which is what makes his downfall so inevitable.

There’s a helplessness that settles in when faced with an imminent medical emergency. Each movement of life carries with it both heightened significance and a lack of focus.

I pulled up the directions on my phone to the nearest hospital: Mount Sinai West, on 10th Avenue. We arrived around 3 a.m. There, beside the Emergency sign, were two paramedics standing around joking. Having grown up in much more rural and suburban areas of the country and being used to hospitals with enormous sectioned parking lots, I pulled up beside them and asked where emergency parking was. They shrugged and pointed to the street behind me. “Find a spot.”

Keller Dover is a man of great frustrations.

His foil is not ultimately a character in the film but is rather himself; he wishes the world were a certain way, but it is not. He wishes he were a certain way, but he is not. This disappointment in the world around him leads to the scarcity mindset we see throughout the film. His basement is filled—in addition to the bags and cans of dried food—with gas masks, supplies, and multiple bags of lye. He does not trust the world, and wishes to protect his children from its horrors. Yet when his daughter Anna goes missing, he is confronted with the very thing he fears most: the dissolution of his family has come to him at last.

We learn later on in the film the true nature of Keller’s family of origin—and particularly his father, who worked for many years as a prison guard before killing himself when Keller was a teenager. One can imagine Keller taking this in, living with grief, absorbing it into his body—and then one day, years later, holding his firstborn child for the first time, when that special combination of awe and terror at the sudden realization of a new life collide into one. One could imagine Keller promising himself, unaware of what lay ahead of them all, that their lives would be different than that of his father’s family. That perhaps Keller couldn’t offer them much, but he could offer them peace and stability. He could, if nothing else, do this for them.

Freshly born babies look like misshapen gray aliens. This was my first thought as the nurse gathered our son’s feet in one hand and smacked the soles sharply. Our son cried until they wrapped him in a white hospital blanket; they briefly showed him to us before wheeling him away to another floor for the NICU. “Don’t worry,” the doctor said, smiling at me. “He’ll be bigger than you one day.”

Our son was born five pounds exactly—big for a preemie—but he still needed to learn how to eat on his own. When we visited him later that day, we saw his tiny body splayed out within a plastic incubator, monitors connected to chest, feet, and arms. A feeding tube had been inserted through his nose. We opened the case and held his delicate hand for the first time.

Keller Dover is a man who thinks sobriety alone can save him.

“I haven’t had a drink in nine and a half years,” he tells Detective Loki at one point in the film. “I figured, if I walked around the parking lot a few times, by the time they opened, I’d stop wanting it that bad.” The viewer knows that he is lying to Loki—that he was on his way to further torture the man he thought was responsible for the abduction of his daughter. Keller remains convinced of the control he has of his own story. He has convinced himself of his own autonomy, that ultimately he alone can find his daughters, and has failed to grasp the film’s central question: How do we make sense of this world in light of its seemingly blind cruelty and suffering?

Prisoners is a bleak movie; it is tempting to think its message is that no one cares, that life is meaningless and cruel. But this is not the full story. Prisoners is a movie full of deeply caring people who have been broken down by systems that do not support their caring. Detective Loki, assigned to find Anna and Eliza and who has never failed to solve a case yet, cares about the girls but is hindered professionally by his police captain and personally by his childhood, which is only subtly hinted at throughout the film: he spent six years at the Huntington Boys’ Home, surrounded by “chicken hawks” like Father Dunn, who he confronts early on in the film after discovering a dead body in a hidden basement.

Loki is relentless in his pursuit of the girls, but spends most of the movie chasing these dead ends and red herrings, following these blind alleys as far as they will take him, hoping they lead towards a greater understanding of why and how the abduction took place, that perhaps on some greater level they will somehow emerge on the other side of this great calamity with something profound to tell him about the nature of existence. When he eventually follows Keller to the abandoned apartment complex—the same one where Keller was headed when lying about drinking, the same place where Keller’s father, years ago, killed himself—Loki asks him, “Why didn’t you tell me about this place?”

I learned a lot just from sitting around the NICU. Only one of us was allowed in at a time, so while I was helping our son practice taking a bottle, one of the nurses told me about a couple from France who had given birth five or six months early while on vacation in New York. They’d had to stay in America with their baby for nearly a year.

There were some babies in that NICU—as there are in countless NICUs across the country and around the world right now—who would fit in my cupped palm, whose fragile bodies were so delicate, their lives so uncertain, that they were completely cut off from all physical human contact. They lay encased in plastic incubators, completely sealed off from the outside world and hooked to tubes and monitors and placed under a variety of lights for both warming and healing. Their parents would suit up for each visit: blue-green hospital gowns and hair nets and face masks and gloves. Each touch of their child’s hand was separated by plastic; the line between health and tragedy was razor thin.

There is a survival mentality in a NICU. Each parent there is haunted by the overarching question of how to make sense of the unexpected in this world, but each plods along by necessity—one foot in front of the other, one day at a time, moment by moment. Every interaction with your child in this context brings with it now a heightened reality: this is all important. Everything matters.

Keller Dover is a man who does not trust anyone around him, who believes in the necessity of violence.

There is a precision to the details we are presented with throughout Prisoners. “We were always trying to express things with as few shots and saying [on the surface] as little as possible,” the director, Denis Villeneuve, said in an interview with Indiewire. There is a shot, early on, of a tree outside the Birch’s house: inside, the family eats their Thanksgiving meal. All seems to be well, and yet the camera very slowly moves closer to this seemingly random tree. “This shot was designed not to be understood, but to be felt,” Villeneuve said. “It has a subconscious feeling that can vibrate in your soul. It’s like when you suddenly have a bad feeling but you don’t understand what it means . . . [The trees are] always there, at least in the background. Each scene you can feel their presence. And they are linked with this idea of necessary violence.”

It is this concept of “necessary violence” that drives Keller to the absence of moral clarity. What is right is what is efficient—it is whatever it takes to produce the outcome he desires. And so, to regain what he claims to love, he becomes the thing he purports to hate: a liar, a thief, a drunk, a kidnapper. Whatever it takes.

It was a month until our son was ready to come home.

We didn’t know what to expect after he was born, but we were met with such disarming joy and delight that it has become a favorite memory. This was perhaps the most surprising aspect of all: rather than being confronted with an uncaring world, we found such extraordinary people. There were friends-of-friends, even acquaintances-of-friends, who made space in their lives for us. We stayed in three separate places, free of charge, the owners of each apartment—people we’d never met before—buying us baby clothes and food and toys and gift cards.

It's easy to think like Keller Dover in moments of life’s unexpected cruelty, to believe that the only response to an uncaring and violent world is reciprocal anger and isolation. To pull away. But when, finally, our son was given the all-clear and we drove him home for the first time, I kept thinking about how thin the boundary is between safety and security and total chaos. That there are no guarantees. And perhaps this is the point, this awareness of the fragility of our own existence—that it will lead us in some way to a deeper experience of the moments we have, to appreciate the fleeting and uncontrollable nature of our lives. Because everything matters.

Austin Ross's fiction and essays have been or will soon be featured at Necessary Fiction, Lost Balloon, Still: The Journal, and elsewhere. He is an editor at Flash Fiction Magazine and an editorial consultant at CRAFT Literary, and lives near Washington, DC with his family. Visit www.austinrossauthor.com for more or follow him on Twitter @AustinTRoss.