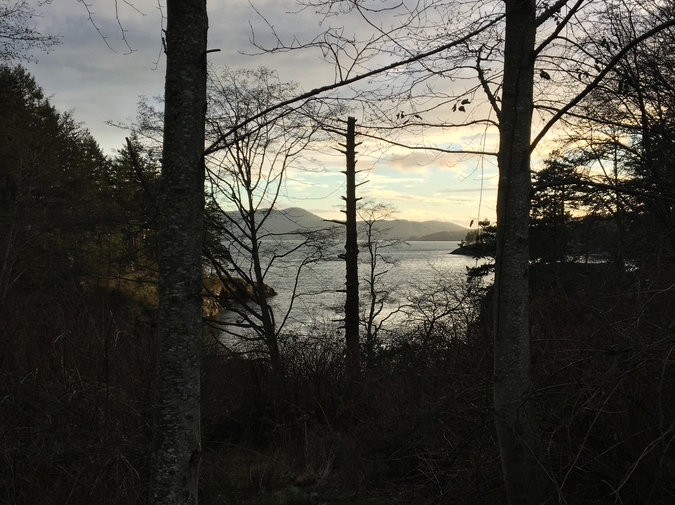 A robot took my uterus. Left my ovaries behind.

I imagined twin ovaries floating within me, like bruised figs, slow motion pinballing from my rib cage down to my pelvic floor, rolling along my stomach, spleen, liver, lungs. I saw my insides as outer space, a zero-gravity zone. My ovaries, without my uterus holding them, were untethered, free to explore.

My doctor raised an eyebrow, "No, they're still attached."

"Oh." I gave an unconvincing half-laugh, both disappointed and relieved.

The patient has enlarging uterine fibroids, menorrhagia and dysmenorrhea. She was advised to undergo laparoscopic hysterectomy and bilateral salpingectomy. She expressly desired conservation of the ovaries.

The operating room had been cavernous, cold, and in my memory, blue. I might have been on Neptune. Tendrils of frost reached through my thin hospital gown. Without my glasses, the medical team looked blurry and uniform—scrubs, face masks, protective eyewear. They hovered over me, speaking the foreign tongue of medicine. I lie on my back taking in the mechanized apparatus surrounding me. Robots. Some were covered in cloth, just like my neighbor's Harley. As the anesthesiologist leaned over me with an oxygen mask in his hand, I had a vague thought of that Twilight Zone episode where the woman wakes up from surgery, and her nurse, her doctor, everyone around her…have pig snouts.

After induction of satisfactory general anesthesia, the patient was placed in dorsal lithotomy position and prepped and draped in sterile fashion. A uterine manipulator was placed into the uterus. Foley catheter placed. The supraumbilical incision was made. The abdomen was insufflated. The needle was removed and the trocar placed. The laparoscope was introduced and the right and left lateral robotic trocars were inserted under direct visualization. The patient was then placed in moderate Trendelenburg and the robot was docked.

I'd first sought out this doctor after curiously watching a small bump in my abdomen get bigger over the course of a year. When I lie in bed at night, I'd poke at it, firm against my touch and think to myself, "what are you?" I'd texted my older brother, an ER doctor, "I have a protrusion in my abdomen. Am I dying?" to which he'd responded, "You might be, but probably not. Maybe you have a hernia." As the bump grew, my monthly cycles became biblical floods that left me light-headed and anemic.

At my first appointment with this doctor, when I recounted my symptoms, she'd looked at me over the top of her glasses and said, "You live in your head, don't you?"

For one who lives in her head, I hadn't thought much about it.

After examination, the doctor confirmed her suspicion—I had non-cancerous tumors, fibroids, and one in particular was pushing around my organs to make space for itself. I nicknamed this fibroid "PB" for Pushy Bitch.

The vessel sealer and monopolar scissors were then used sequentially to cauterize and divide the round and utero-ovarian ligaments and the anterior leaf of the broad ligament bilaterally. The tubes were excised…the uterine arteries were cauterized and divided. The specimen was morcellated sharply and removed without difficulty.

After surgery, the doctor said of PB, "that was a big one…it was as if you were carrying a three-month-old fetus."

A fetus is commonly compared to a specific piece of fruit to illustrate size. Five weeks? A peppercorn. Ten weeks? A kumquat. A baby is to a tumor what a fruit is to a baby. I was carrying a lemon.

A few weeks before the scheduled surgery as I'd struggled through another debilitating menstruation, I'd texted my mother with the realization, "I'm having my last period!" She'd immediately texted back, "Are you ok?"

I was. I had no attachment to my uterus. A hysterectomy did not equal less than to me. I was for function over form, and this function was no longer needed. I'd given birth once in my life. To twins. They came at 35 weeks. (Honeydew melons.)

When I gave birth, I was in another cavernous operating room with another large medical team. The obstetrician had quickly induced me with a pitocin drip after an allergic reaction and a blood pressure spike. My mother was by my side, fully gowned in disposable soft green from her shoe covers to her hairnet, brown curls peeking out.

Per my request, a nurse allowed a small wheeled table by the delivery bed, on which sat a framed photo of my husband and me on our wedding day. In the image, we looked like beautiful people, all rosy cheeks and shiny thick hair and sparkly eyes and white teeth.

When I gave birth, my skin was angry with hives, and my husband laid pale and listless in a different hospital awaiting a stem cell transplant, a last ditch effort to keep him alive.

The patient is a 35-year-old male with a history of bi-phenotypic leukemia with both ALL and AML features, status post induction chemotherapy times two, who presented with a history of fever six hours prior to admission, following a platelet transfusion about an hour prior to the fever spike. The findings in this case are those of a relapsed acute bi-phenotypic leukemia.

I imagine my late husband now, untethered. His last two years contained catheters and IVs and feeding tubes. Each insertion point carried a bruise. He'd briefly held each tiny twin in an arm, rocking them against his chest. A bony dry finger against a perfect pink cheek.

He couldn't stay long. He left us when the twins were five months old. (I will not give you a fruit.)

I lived in my heart a long time after he died.

He loved his red Stratocaster and I want to believe he strums it as he pinballs through the universe. Maybe he sometimes jets down to earth to peek in on me, maybe even placing his hand on mine when I am deeply sedated, as a robot removes the body part which carried our twins.

Rachel Greenley is a Seattle-based writer published in Brevity, The Baltimore Review, and Manifest-Station, among others. Her memoir, The Lake Effect, placed third in the Pacific Northwest Writers Association Literary Awards. She is a current MFA candidate in the Bennington Writing Seminars. Her current obsessions are grief, the dust bowl, and the lodgepole pine, and she writes about them on Twitter at GreenleyRachel.