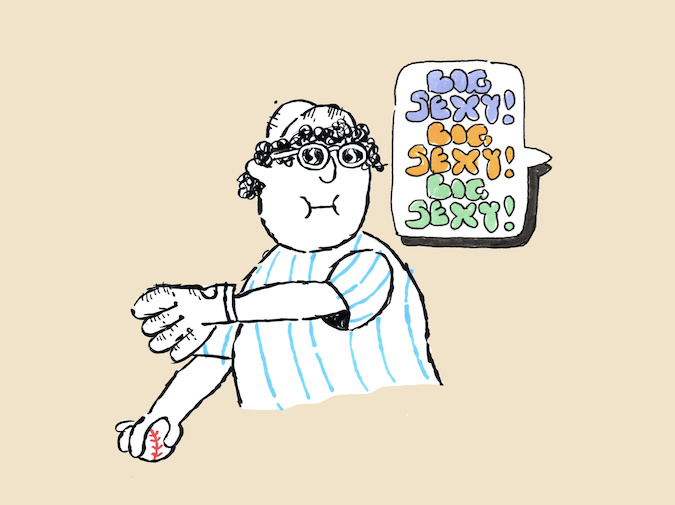 I was cruising through the lineup, 6-0, decimating my neighbors in our annual July Fourth softball tournament when a pinch hitter came to the plate. It took a minute — two pitches, actually — to place him but then it hit me. I’d seen that chin before. I stepped off the rubber and went a few steps to the visitor’s dugout and called out.

“Is that Bartolo Colón?”

They laughed at me. The player-coach gave me the finger. The lady from down the street mooned me.

“You can’t do that,” I said. I got the umpire’s attention. “He’s not on their lineup card.”

The ump stepped out to the front of the plate and unfolded a piece of paper.

“Right here,” he said. “Bartolo Colón. Says it right here.” He tucked the card back into his shirt pocket and crouched behind the catcher. “Let’s go,” he said.

I looked at my fielders. They shrugged.

“See what happens,” said my third baseman. Now he was playing deep.

From the batter’s box, Bartolo Colón gave me a nod and a warm smile.

The count was 2-and-0. I wasn’t going to pitch around him. I came inside but with a higher arc and more backspin.

You don’t generally hear that kind of contact in a softball game but me and everyone on the left side of the field ducked. We didn’t need to. I’d never seen a ball go that high. And everyone was cheering, even my own teammates.

Some of the kids tried to chase the ball down. No use. We weren’t getting that one back.

When they took the field he, obviously, pitched. A nimble master. I mean I knew that about him, had heard vaguely back in the day about a stem cell treatment. But to see it in person? Holy shit.

Afterwards, he stuck around long enough to show us some tricks, tells some stories. We invited — urged — him to stay longer but he just smiled and nodded. Then he made his way to his car. Modest thing, a midsize four-door sedan. Was it a rental? Wouldn’t he, you know, splurge? We didn’t think to ask until later.

Me and the player-manager drifted to the parking lot to wave goodbye.

I asked him how he managed to land Bartolo Colón in a smalltown softball tournament.

“He got here just before the game started,” he said. “Guy just loves to play.”

Bartolo Colón pulled onto the street and gave a short burst of honks. He waved and we waved and some screamed his name and some yelled Big Sexy. He accelerated slowly, in no apparent rush, maybe on his way to find the next softball game wherever that should be. He kept the window down.

Ken Derry is a former editor for the New York Yankees and has an MFA in Creative Writing from The New School. He lives in New Jersey with his wife and kids.

Mark Neeley is an animator & illustrator from Cincinnati, OH. In addition to contributing at Aquarium Drunkard, his short films and music videos have been screened at film festivals around the world.