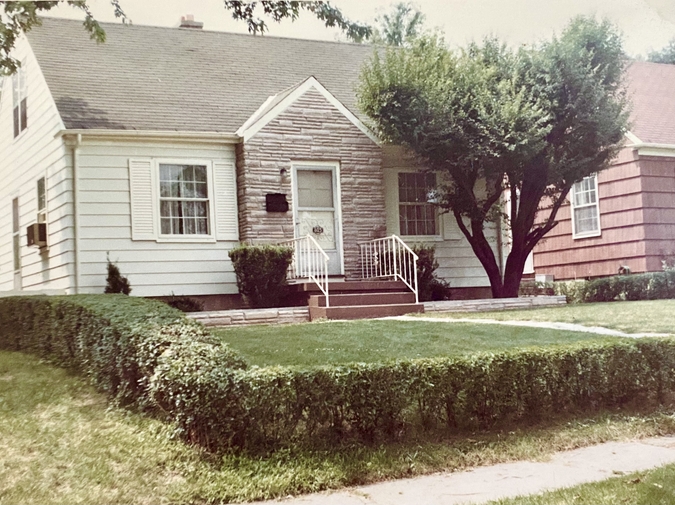 In the room next to mine is a woman in a crib. She is thirty-five years old. She is my aunt. She has never walked nor talked in sentences. Her name is Tawny. I only see her when I visit my grandma, which is a few times a year, and I only see her through the slats of her crib, where she lies on her back, smiling, although sometimes before they close the door, I hear a moan like crying.

I’m happy to be kept out. At Grandma’s, I spend nights with my cousin playing Beat the Shark on the blue-white-ocean carpet between couches and eat M&Ms with milk. My cousin and I take baths with pearlescent beads that break open in the water and cap our toes with gummy shells. We set our grandma’s electric organ to something called Bossa Nova. We obey Grandma’s orders not to open doors—although once, my cousin opens a door and finds our grandpa’s shotgun behind it and threatens to shoot me if I move. My younger cousin is a tiny girl with dolly ringlets and no discernable soul. I don’t move. Years later, on a bulletin board collaged with grinning friends and puppy pictures, I’ll stab out her eyes with a thumbtack.

In the room next to mine, above the woman in the crib, are shelves of Harlequin romances. Rows of pink covers with cursive titles and men nuzzling women’s naked necks as if whispering something only skin understands. There must be a thousand thumb-worn spines. Did my grandma sit for hours at Tawny’s bedside, wishing to be swept away?  I cannot say. To avoid the books is to look at Tawny. To avoid Tawny is to look at the books. I stare at Grandma’s blue-white-ocean carpet and sink to quiet depths.

Ask me now about Grandma’s house and I’ll recall the ocean-carpet, candy, bossa nova, cousin, shotgun, books. I won’t mention the adult woman in a crib—a person who was someone’s daughter, sister—and I guess, aunt—for a lifetime. In my mind, I can’t quite see her. You’d think this image would arrive first. An adult in a crib is notable.

“She got her period you know. That’s something your Grandma had to deal with.”

That’s my mother, always reminding me of people’s periods.

But my mother’s point is this: a parent’s loyalty is a gift the way the sun is a gift—constant and consoling. Last week, I opened a closet at my father’s house. Inside were all the books I’d ever given him, forty years’ worth, alphabetically arranged and rated, grades noted in pencil. My mother keeps a file cabinet full of all the words I’ve written, each scrawled story and Christmas list. At any moment she’ll cite a poem I penned in 1980. In separate cupboards in separate houses, my parents keep books made by my brother. Books about robots, airships, the adventures of a four-year-old girl sketched with braids like mine.

When my parents open doors like these, where am I supposed to look? A parent’s loyalty is a gift like the sun is a gift: blinding, near-obliterating.

In 1974, I’m at my Grandma’s because in a room across Ohio, there’s a boy looking through the slats of his bed. He is my brother. He is thirteen years old. The pain that began in his hip in Little League has metastasized into leukemia. He has gone into remission twice, long enough for us to take a plane across the country and wear sunhats to Disneyland and pose in the shadows of monsters. The year I decide to start forgetting things, I am four and at my Grandma’s house while my brother is dying—I’m still learning how to say this—while my brother dies in a hospital bed hours away.

Now in the room next to mine, my daughters cut snowflakes as I tell you the story of their uncle. I am forty-eight years old. I have never told them a thing about him.  But I’m trying—I’m hoping—I want to tell them his name someday. My kids are a gift the way the sun is a gift: a force that pulls us all together, a terror I’d die without.

At times, it is impossible to look directly at them.

At times, my eyes burn as I sit at my children’s bedsides, reading book after book about rescue.

Rebecca Meacham is the author of two award-winning fiction collections, with recent work in Best Microfiction 2021, Gigantic Sequins, and Wigleaf. She directs the BFA in Writing and Applied Arts program at University of Wisconsin-Green Bay, where she also runs The Teaching Press. Her prose has been set to music, translated into Polish, and carved into woodblocks and letter-pressed by steamroller. Read more at http://rebeccameachamwriter.com.

image: Photo provided by the author.