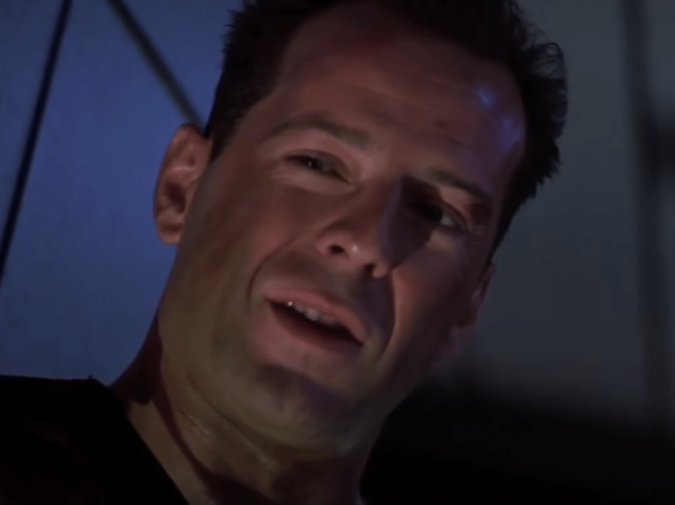 … but that’s what I want to do one day—die hard, and with a vengeance. I like to imagine the trailer like this: Bruce Willis in a tank top, glistening, a gun steady in his hand, and a tall silver building, its spire burning in the background. I want to be Bruce Willis at the scene of the crime. (Any crime.) I want to wear a ribbed tank top covered in ash and blood and tell a uniformed cop that I was there, that I saw it. That he’s already too late.

I’ve never seen Die Hard but I know what death looks like, all its cinematic angles—quick, slow, violent, exhilarating, humiliating, used for comic relief. Not the kind of relief Bruce Willis feels at the end of a long day of filming fight scene after fight scene, where the hero gets knocked down but not out. It takes resilience to be resilient, to go home and sit on the couch, not a trace of fake blood—to make peace with a kill. For Christmas, I want to be the crime: the body on the ground, not its chalk outline.

Jiordan Castle is the author of the chapbook All His Breakable Things (Finishing Line Press, 2020). Winner of the 2018 Pigeon Pages essay contest, her work has appeared in New Ohio Review, Third Point Press, Verdad, Vinyl, and elsewhere. She is a regular contributor to the LA-based food and culture magazine Compound Butter and lives in New York City. You can find her at jiordancastle.com and @jiordancastle everywhere else.