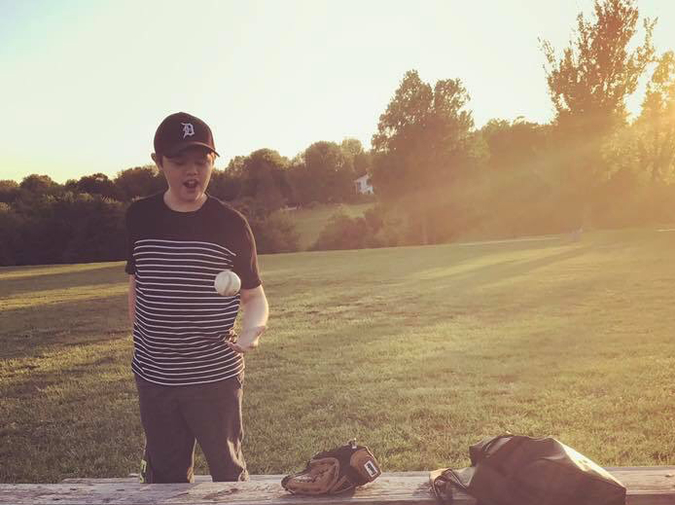 If You Build It Baseball Dads Will Come

When you left, Baseball Dads started to pop up everywhere: the man in the Royals hat at Arts Fest looking at green-glazed ceramics, or the car mechanic who changes my oil and fixed my calipers last June. A Baseball Dad could be any man at the grocery store carrying the right build. Dad-ish. Fit-ish. Baseball-ish. There was the running joke between me and my friend, Shane, about the Baseball Dad who coached the fourth-grade team my son, Beck, was on. Before practice, I’d throw the ball with Beck, and when Baseball Dad got there, he’d say, “Great arm,” or “Nice one,” or “Looking good.” The first time this happened, I sighed when he walked away, squinting my eyes to see if he had a wedding ring. For an instant, I thought he was talking to me.

I messaged Shane after the first practice. “I think I’m in love with Beck’s coach.”

“What’s he like? Does he have nice arms?”  Shane asked.

“A+ arms. He wears Raybans when it’s sunny out and has a nice smile.” I paused, adding, “That’s enough for me right now.”

Enough for me was anything that kept me from getting too quiet, too serious – whether it was fantasizing about another life with Baseball Dad (or anyone who was kind to me, really) or porch nights with Shane, where we laughed at Tinder profile pictures featuring men holding a big ass trout or bass.

Sometimes, Shane would just listen to me cry.

Beck recognized the moments I got too quiet, too. Perhaps the giveaway was the shape my face took when a memory resurfaced. Perhaps my son could hear my heartbeat increase or the way I forgot to breathe when overcome with that quiet.

Beck would just smile. He would say, “Breathe,” and I would breathe.

We listened to Mike Shannon on Cardinals Radio for three seasons: his voice filling the corners of silence on early summer drives when approaching dusk lit up with fireflies, his voice pouring over crackling vegetables in the skillet that you’d toss in the air from time to time, showing off techniques you learned from the Mexican restaurant you worked at while juggling graduate school and teaching. You thought it was cool how, in 1996, I saw Ozzie Smith’s last game, and I liked that you loved the Cardinals because you were the kind of man to root for home.

You repeated these Shannonisms – the endearing things Mike said during home games and, if we were lucky, an away game just close enough for him to travel. I can’t remember them now – the Shannonisms – but there’s an appropriately-named website that will give you a new Shannonism every time you refresh the screen via clicking on a dancing image of Mike Shannon, smiling wide with all his teeth.

What I do remember: The first time you played catch with Beck. I cooked dinner while the two of you stood in the backyard. From the open kitchen window, I caught myself smiling when I heard you give him pointers: line up with the target, use your entire body. When you drove away, Beck asked me when you would be coming back for another round – if I could join, too.

During the warm months, we’d form a triangle, the ball going back and forth, dogs watching from the sliding door.

We started watching Cardinals games at sports bars with Beck. You would drink your whiskey and Coke, eyes up at the screen. During commercial breaks, you’d leave to smoke a cigarette outside, and I’d see you looking through your phone, taking a long drag with your head down. And although it bothered me you couldn’t wait to smoke whenever we left, I’d forget the irritation soon after you came back and patiently explained the game to Beck when he asked questions.

“An RBI stands for Runs-Batted-In,” you told Beck, who listened hard, eyes focused. You pointed at the recap playing on the television and continued, “Whenever a batter hits a ball and someone makes it home, the batter will get an RBI. See, look: Matt Holliday hit the ball down the left and got onto second. But he also got Carpenter to the home plate – a Run-Batted-In.”

The next summer, I watched fireflies from Shane’s porch. We’d talk about how the Cardinals and Cubs were neck and neck for first in the NL Central.

“You know, my dad likes baseball.”

“I should fuck your dad,” I joked and immediately felt bad. “I don’t think I could do that to your mom,” I added.

I thought of Mike Shannon when I found out about your second life – your second apartment, your second girlfriend who thought you were going to propose after only a third of the amount of time you and I had been together. I found out a month before opening day – March 2nd, my birthday. I thought of Mike Shannon’s voice filling the corners of a more unsettling silence. Not the kind of quiet speckled with firefly lights or vegetables cooking, but the kind where my son reminded me to breathe. So I never turned back on the radio, replacing his voice with television games at a sports bar we never went to. So I graded or read or thought about maybe writing again, and I’d watch any game offered on the screen, despite whether the Cardinals were playing that day. I even kept track of the Cubs whenever Jason Heyward was traded from Cards, and new interest offered both a Baseball Crush as well as some satisfaction that you weren’t happy about the stats that year. You weren’t the type of baseball fan who loved the beauty of the game, but instead, reveled hard in rivalry – sometimes even direct hatred – all masked underneath being the kind of man who always rooted for home.

I began to pack away our own home, and if it got too quiet, I would sometimes go down to the sports bar just to silently be with others. Sometimes these others were Men-Who-Explain-Baseball-To-Me  –  men who tried to talk to me while I went back and forth between watching a game and grading. This wasn’t new. When I first transition from Shannon to television, some male bartenders asked if I actually liked baseball – eyebrows raised as they wiped the counter.  One patron deconstructed baseball on an atomic level. I gave him a tight smile, cut him short when he got to RBIs. “That’s enough for now, guy,” and I’d get back to my work. I learned that I loved frowning vacantly at douchebags.

Through a stream of baseball games and public solitude via grading at sports bars – I also learned I could still be comfortable with alone-ness.

As October approached and Tinder dates passed, Mansplaining Baseball became a norm. But so did rolling my eyes or being okay with silence. I watched every game of the Cubs playing the Indians, and fuck, did you miss a beautiful chorus of drunks bros and a drunk me with drunk friends singing, “Go! Cubs! Go!” when they had finally won. I didn’t think too much of you. For an instant, I wondered if that machismo-enriched-rivalry has clouded appreciating the sportsmanship of both the Indians and the Cubs in the most remarkable World Series of our lifetimes. I hoped it didn’t, and I kept singing. Like Mike Shannon taught me, “Don’t bite your head off to spite your nose.”

The only regret I have is realizing too late that he wasn’t essential enough to be the you in this narrative. But a new season is with us now. I can feel the approaching flock of Men-Who-Explain-Baseball-to-me, but I also foresee tossing the ball with Beck, perhaps playing Keep   Away with my new partner in the middle, someone who doesn’t know much about baseball at all.

Bailey Gaylin Moore is currently an MFA candidate studying creative nonfiction at Vermont College of Fine Arts. She studied philosophy during her undergrad and English for her MA at Missouri State University, where she also taught classes in fiction and composition rhetoric. She has served as an assistant editor for Moon City Review as well as a reader for Boulevard Magazine. Bailey's previous publications can be found in Willow Springs and Hayden's Ferry Review.