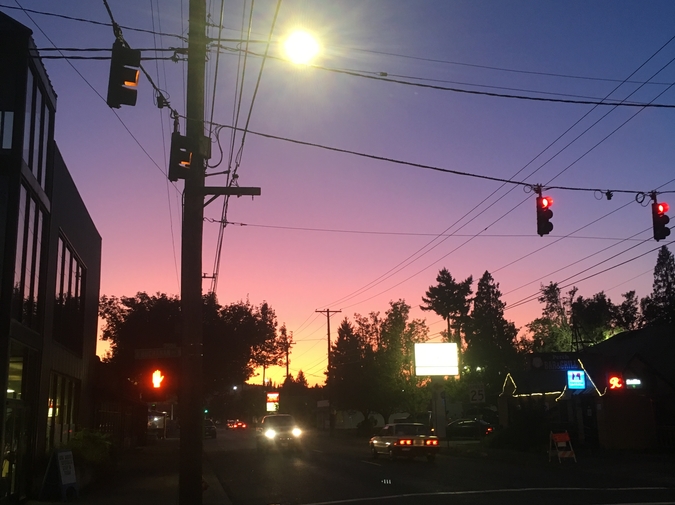 The last time I saw George, we were hanging out at the brewery where he worked as bar manager. He and I were perched on stools, like old times, sipping suds and watching the Orlando Magic battle our interstate rivals, the Miami Heat. The stale stench of hops and malts cut in from the beer vats in the back while I told him about Boston: the New England beer scene, the fervent sports fans, the colleges where I taught writing. He shared that things had been going well for him, considering.

Over the past several years, his family and other friends and I had watched him bottom out time and again by huffing inhuman quantities of nitrous oxide and keyboard duster. The chemicals made him belligerent, and he’d cycled through jail, rehab centers, halfway homes. Now he was on the mend, holding an apartment, car, and job. It worried me that he worked in a brewery, daily exposed to inhibition-sapping booze. But he thrived behind a bar, bantering with patrons about craft beer and fantasy football. Tonight he seemed in high spirits; we both were. We were just happy to be hanging out again.

“I want to hear about your Dylan project,” George said in his warm, gruff voice. I’d been working on a master’s thesis, exploring every Dylan album in chronological order. “My favorite Dylan album…” George added. He didn’t even have to finish: Infidels.

Throughout our late teens and twenties, we belted out the album’s best tracks: “Jokerman,” “I and I,” Don’t Fall Apart on Me Tonight,” all the while honing our wheezing, nasal Dylan impressions. I’d owned the CD in high school, uploaded it to my desktop computer in college, and eventually burned a copy for George to play in his car.

“I wanted to call it Surviving in a Ruthless World,” Dylan told Kurt Loder in a 1984 interview. “But someone pointed out to me that the last bunch of albums I’d made all started with the letter ‘s’. So I said, ‘Well, I don’t wanna get bogged down in the letters.’”

We didn’t want to get bogged down, either, so as we burned the disc, we left off the lowlights. I cut the quick-tempoed polemic against global trade, “Union Sundown,” and the allegorical defense of Israel, “Neighborhood Bully.” George went further to leave off “License to Kill,” a critique of humankind’s superiority complex, and the gospel-era remnant, “Man of Peace.” Our abridged versions were tightly packed with Dylan’s soulful quips, along with Mark Knopfler and Mick Taylor’s jivey guitar licks.

We lapped up what was left, especially the luminous opening track, “Jokerman.” We’d wail the whoa-oh-oh-oh ohhhh refrain, competing for the best imitation, which usually went to George. Enigmatic, poetic, expansive, the song conveys “a shadowy world” where “skies are slippery gray.” The chorus sees “Jokerman dance to the nightingale tune,” a romantic spin that captivated George. He liked “Jokerman” even better than “Tangled Up in Blue,” because it was sweeter, stranger as it follows its protagonist on a twisting journey through biblical allegory and political corruption. During the outro, Dylan’s harmonica cuts through the mellifluous sound like a torch through steel.

Through Dylan, George and I had established a shared musical ground. George wasn’t as into jam bands, psychedelia, and Americana as I was, but came of age listening to more contemporary alternative rock: Modest Mouse, Vampire Weekend, Foster the People. He was a skater-punk in middle school, when we first met, a social group that contrasted the neo-hippies I’d befriended. Our friendship finally sparked in high school when we converged around house parties, weed, and golf. We’d grown even closer by the time he helped me get a job serving tables at the pizza-and-beer restaurant, Mellow Mushroom, where he’d risen to bar manager. For three years we worked elbow-to-elbow: me the droll sidekick to George, the funniest person in every restaurant, bar, or living room.

What happened to George wasn’t funny. Huffing ravaged his body, his relationships, his finances. In rehab, he learned he needed to imbue his life with greater meaning, and he embraced the wisdom literature they introduced him to. That night at the bar, he repeated to me the Four Agreements, the Toltec tenets he strove to live by: be impeccable with your word, don’t take anything personally, don’t make assumptions, and always do your best. He counted them on his fingers before stepping out for a cigarette.

As I sipped my pale ale, I had to admit George was living by those standards. He never held back the details of his huffing: the trashed hotel rooms, the hallucinations, the lost bowels. As disturbing as these stories were, they always remained consistent with the facts. I wasn’t the best at calling and texting, but George didn’t seem to take that personally. He knew I was busy in Boston, and he refrained from assuming anything about my motivations. Just as he withheld judgement, he never asked for pity; he was serious about life, and success, and the affection he harbored for his loved ones. All the same, George was at his best when he was hamming it up with his friends.

I want to say George was the Jokerman. Both traversed a haunted world of temptation and illusion. Both struggled to keep “one step ahead of the persecutor within.” Both suppressed their macabre nightmares to not only survive, but to embrace a ruthless world.

But George wasn’t the Jokerman at all. He wasn’t some literary figure. He was more charming, more complex than that. He was everyone’s best friend.

That night at the bar, I was drinking slowly. I’d borrowed Mom’s Buick, and I couldn’t keep it out overnight, because she needed it for church in the morning. Still, after that round at the brewery, George and I drove separately to another bar, Redlight Redlight, where we had a drink and decided to hit up the Mellow Mushroom, for old time’s sake. George’s place was on the way, so I offered to drive. George went to drop off his car while I got gas. When I pulled up to his apartment, a small, cinder-block structure where his car was parked, he wasn’t standing outside. I waited a few minutes, and he still didn’t come. I got out and knocked on the door. No response. So I called.

“I’ll be right out,” he said and hung up, his voice deeper, thicker than before.

I waited in the car another several minutes until he got in.

“What were you doing in there?”

He wasn’t being impeccable. I let it go and pulled away.

At the Mellow Mushroom, some of the staff and customers still knew us. George was drinking faster. Our banter was growing louder. Before long, George threw a round of Maker’s Mark on his tab. We tossed ‘em back and I folded my arm around George’s shoulder, began to sing, “Who are these people who are walking toward you…”

George finished the line: “Do you know them or will there be a fight?” We bellowed the rest of the lengthy bridge from the final track of Infidels, “Don’t Fall Apart on Me Tonight” and George growled out, yeah! I met his eyes, and then I felt it, the desire to stay out with him all night, to consume everything we could until we woke late in the morning with dry mouths and pounding headaches, desperate for water and bacon. That urge let me know it was time to go home, because if I stuck around any longer, I’d be too drunk to drive. I paid my tab and signaled George to pay his. We piled in Mom’s car and headed back toward George’s apartment, recalling our Mellow Mushroom days--the servers we’d liked and loathed, the barflies we’d befriended, the golf we’d played with the owner, Chuck. We communed in that space before addiction and other dreams took hold.

It was almost midnight when we neared George’s place. He blurted out, “Ah shit. Just drop me back off at Redlight.”

I knew then the recklessness that had swallowed him before had risen again. But what could I do? I had to let him go.

The last I saw of George, he hitched his pants and strutted into yet another bar where he knew all the bartenders. He might’ve stayed till close, or longer, well after I’d fallen asleep in Mom’s condo.

Not four months later, back in Boston, I got the call: George had been huffing, and his heart had given out.

Oh, George. I still hear you in the songs.

Paul Haney's work has appeared in Slate, Boston Globe Magazine, Cincinnati Review, Fourth Genre, Sweet, Potomac Review, and elsewhere. He holds an MFA from Emerson College, where he served as Editor-in-Chief of Redivider; now he's the managing editor of Dylan Review. His manuscript-in-progress is a narrative journey toward a next-generation Dylanology. Follow him @paulhaney.