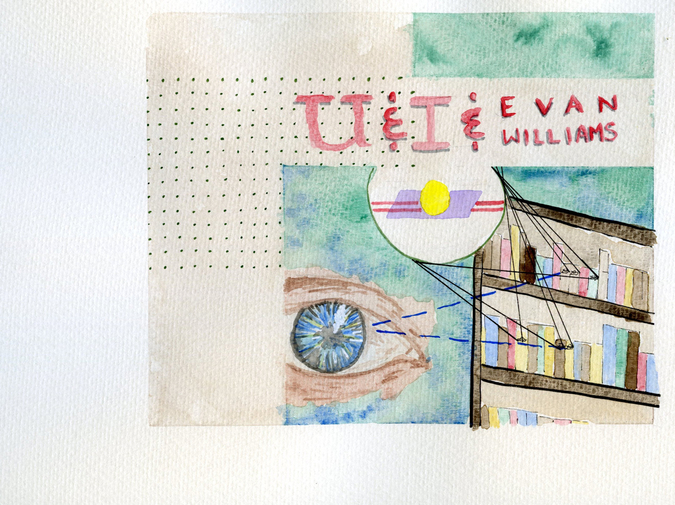 Nicholson Baker’s U and I In 3 Days

Learning the Difference Between John Updike and Upton Sinclair, and More;
Nicholson Baker’s U and I In Three Days

I started reading a book called U and I by Nicholson Baker today. It was the first Vintage Contemporaries book I could find on the shelves of the Powell’s down the street from my apartment. I spent a while in the Powell’s making my eyesight worse. The way I do this is not that special, but it does work: I adjust my eyes to look very closely at the spine-tops of the books there for that special little mark with the sun coming up over a horizon. Or going down. It’s not super clear, if I’m honest. If going down, it’s an indictment of literature. If coming up, it’s an indictment of past literature. It might not even be a sun or a horizon. But it’s the mark that helped me ruin my eyesight today.

Before I even started reading the book I was thinking how I could make it about me. I asked the cashier at Powell’s if he had any thoughts on the matter. He didn’t say anything at first. Then I said more clearly, “How do I make this book about me,” and he said the best way to do it would be to replace all the proper nouns with “Evan Williams.” He didn’t say “Evan Williams,” he said “Your Name,” but it’s all the same.

I decided that I should keep reading U and I in case Nicholson Baker found a way to one-up his emotional response to Donald Barthelme’s death and his own subsequent failure to properly render these emotions in a manner pleasing to The New Yorker’s editorial staff.

I googled John Updike to see if he was alive. That’s how I found out I’d been confusing John Updike and Upton Sinclair for maybe five years. I’ll be critically panned for this, probably, at least as long as I live.

Nicholson Baker knew John Updike from Upton Sinclair, which probably helped him in writing this book. Nicholson Baker starts talking about how he realized that he shouldn’t waste time doting on the dead, everyone does that. Instead, he should spend time making sure the most acclaimed writers of our time know how good they are. Probably they don’t know. Probably they are deeply depressed. Probably they are wrapped in an expensive cashmere blanket right this moment considering how much of a failure their lives have been. I start to wonder if maybe Nicholson Baker is writing this as insurance for his future self. Anyway, it’s at this point that it becomes pretty clear the book is about John Updike and Nicholson Baker, who is referring to himself in the title as “I.” It’s not U and I as in “you and I,” but U and I as in “Updike and I.” Yeah. I think Donald Barthelme got the raw end of this deal.

I really want to go on, but I think I have to explain myself at least a little bit. I have a degree in English. I’ve read a lot of books. Several graduate admissions committees wrote back to me to say that they’d taken the time to read my materials. I know what The Jungle is. I know what Rabbit, Run is. I hold a belief that Rabbit Redux is a bad name for a novel whether it is a sequel to a prior novel whose title contains the word Rabbit or not. If I confused Updike for Sinclair, I think it’s Nicholson Baker’s fault for writing an ambiguous title. “I” is equivalent to a first name. In a book called U and I, it would make sense that the U would be a stand-in for a first name. “Upton and I” makes more sense than “Updike and I.” QED. Email me if you want to fight about this.

I’m going to finish U and I. But I keep thinking about what the cashier at Powell’s said and about what Nicholson Baker did in his writing on Donald Barthelme and about what Nicholson Baker does with John Updike. I think that writing about the dead is boring not because it’s in bad taste to discuss their flaws, but because there’s no good way to make the piece of writing about yourself. This is both because it’s in bad taste socially to make someone’s death about yourself, but also because on a fundamental level it’s difficult to relate to the dead as an alive person.

So I’ll write a book about Nicholson Baker as a way to talk about myself, since he is still alive. The book will be called B and I.

In the book I’ll explain how I came to Nicholson Baker’s work after having thoroughly disappointed my loved ones by deciding to live as a single letter of the alphabet, and, how, when my chosen graduate schools caught wind of my having decided to exist as a single letter of the alphabet, they berated me and ripped to shreds my applications which consisted solely of the letter I.

When I finish writing this book I’ll publish it and when it’s published I’ll go find it in a Powell’s or in some other bookstore. I’ll pick it up off the shelf and I’ll take it to the cashier and I’ll ask how I can make this book about me and the cashier won’t recognize me because probably my book won’t be a commercial hit because Nicholson Baker basically already did what I will have done and he’s still alive, so, tough luck, but the cashier will look at me and say that if I want to make the book about myself, then I should replace all of its nouns with “Evan Williams,” and this time the cashier will actually say “Evan Williams,” and I’ll leave the bookstore with my new book in hand thinking about what the fuck just happened and I’ll open its cover to start writing “Evan Williams” all over the place but really it won’t be that relatable or good even because it’s in extremely poor taste to make your own failures about yourself.