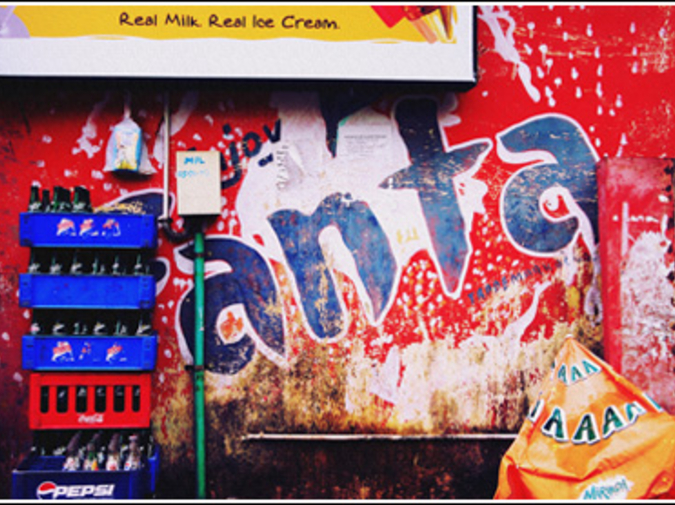 This girl asks me to hold her baby while she goes to the bathroom. We met just this second at the library. I don’t like to deal with crying people, her eyes all red and desperate, so I take the kid. I am a pushover.

She never comes back. I check the bathroom and nothing, just an open window to freedom. I go, check out my books, take the kid to my apartment. I think about calling the cops, but we bond. I feed it (she’s a she). She never complains about suckling from a rubber nipple instead of a flesh one. She smiles and I smile back. I call my mother.

Why? she asks when I ask her if an infant can sleep on a sofa.

No reason, I say and hang up. I make a baby bed with a bunch of blankets and pillows. She burbles a little, is drooly. She sleeps. The sound of my apartment has a new gravity with the whispered interruptions of her breathing.

The next morning I call my friend Paul. Before I say hello he starts in on what he’s scored at some garage sale.

A gross of forks, some of them bent up, though, he says. And a book about grammar we used in high school.

I remember it, I say, which is another lie. I don’t remember much about high school, especially some dumb book about grammar. I let Paul talk about his book for a while until I can ask him my question.

What would you name a girl, I ask. If you had a daughter, I mean.

Paul is quiet on the other line. I can hear the flipping of pages. This goes on for another full minute until he stops breathing through his nose (it whistles) and says, Simile?

We go on a trip, just her and me. I fill the backseat with the blankets and pillows, making her a cradle of 50/50 poly-cotton. We can go to the mountains, I say. Or the beach. Which would you prefer? She squeals and we go to the Grand Canyon. It is far away. Like the moon is from Earth, I tell her. She sleeps. There is a squirming in my heart, as if parts I’ve never used are waking up. This happens when I look at her face in the rearview.

It’s a long trip. I pull off the road when I get tired. I have just enough change for the dry formula at the Exxon. The gas station attendant smiles at the baby and then looks at me, surprised. I want to ask What? but I don’t dare.

We pass the pine forests and stop at the first overlook at the canyon. It’s early and there’s no one but a man watching the sunrise. I’m holding her and we watch the sunrise with the man. The canyon is big. I try to wake her to see it, but she stays sleeping.

Did you ever hear that story about the South American dog? the man asks. I shake my head. He spits on the ground and says, This young lady picks up a dog visiting a poor neighborhood in one of those little countries south of Mexico. She loves it, smuggles it back with her even though it’s illegal.

Why is it illegal? I ask. He laughs and I see he’s missing a tooth up front.

You can’t just let any old thing through the border, he says. So, a few days later the dog gets real sick, right? Coughing and foaming at the mouth. She takes it to a vet and he says ‘Where’d you get this dog?’ She knows she’s can’t get around it, she’s busted, so the she comes clean. ‘An old man gave it to me in a barrio,’ she says, ‘he told me he couldn’t take care of it anymore.’

Wait, I say. I’ve heard this before. It’s not a dog, but something else. Like a rat.

It’s not a rat, the man says. It’s a dog. It’s just small and ugly. All its hair is gone from being old, from being sick all the time.

A group of teenagers pulls up. They look like they’ve just finished a night of drinking. They smoke and sing along with the loud music blasting from the radio. The man with the missing tooth yells over the music. He cups his hands over his mouth, The vet says there ain’t nothing he can do.

That’s an awful story, I yell back. He shrugs. The teenagers toss a few beer cans out of their car window and look at us. I can hear them talking, but can’t make out individual words.

That’s a beautiful baby, the man says. He comes closer to us to get away from the loud music. Reminds me of when I was a father, he says. When my kid was born, my son, I wondered to myself if I’d feel different after.

I think he’s not finished his thought and say, Different after you became a father?

Maybe, he says. Do you feel any different?

She wakes up and starts crying. The man missing a tooth looks into my car. You need a car seat for a baby, he says.

In the story does the dog die? I ask.

The man shakes his head yes.

Where is the twist? I say. Those stories are supposed to trick you, make you think a thing is something else, not the thing you wanted it to be.

The dog was old and the girl loved it, he says. Twists don’t have to be awful things.

He kicks a rock and it bounces across the pavement. He says, Sometimes twists can be okay. Sometimes they can work out.

The Grand Canyon sits there, a big hole in the ground. The teenagers start calling us panochas and I decide it’s time for breakfast.

Lucas Church's work has appeared or is forthcoming in the Carolina Quarterly, dislocate, and Creative Loafing Atlanta. More can be found at www.lucaschurch.net.