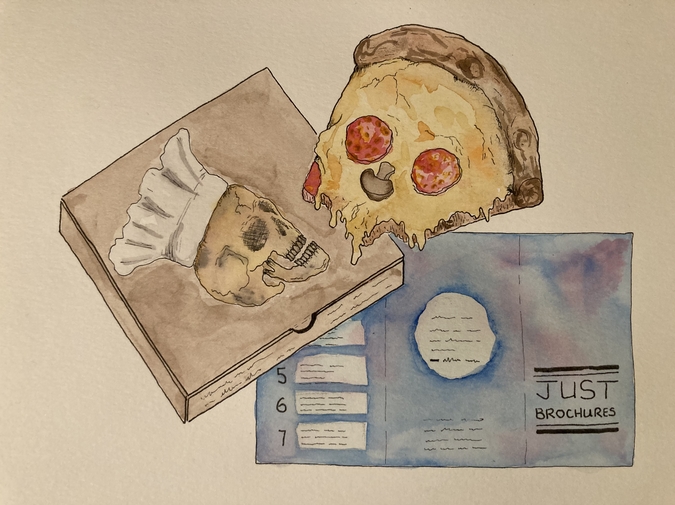 Must Be Santa, Santa Claus

We left the Pizza-Face Diner to go to a place called Just Brochures that no longer sold just brochures. We designed a bulletin at the computers in the Brochure Builder Station, “where brochures aren’t made; they’re born.”

“This date is turning into something I could never have predicted,” Elizabeth said to me, eyes tumid with some sort of meaning.  I decided she was talking about our quest to learn the truth of the boy who was tossed in front of our respective cars, and if he really were tossed in front of cars, then by whom? And why? I typed many of these ideas to our bulletin. I centered the scanned image of the boy in the very middle of the bulletin, enhanced to such an extent that no one could doubt if they’d ever crossed paths with this Anthony while driving in their cars, especially if they’d also hit him.

At the checkout register, the cashier accepted our payment and was sure to pepper her speech with the words “brochure” and “just.” For example, when we first stepped toward her she said, “Thanks for just shopping at Just Brochures. I hope you just found all your brochure and brochure-related needs and they were met to your satisfaction?”

“We did,” I said, impolitely but eager for us to be on our way. I remembered my manners, grinned weakly, and added, “Thanks.”

“Are you brosure?” the cashier said sternly, interrogatively. “I can’t interest you in anything more brochure-related? You don’t have many brochures in your order, here. I count no more than seventeen brochure-related items to your order.”

“There aren’t any brochure-related items in our order, only bulletins and a few placards. Do you know what a brochure is?” Elizabeth said, squinting at the cashier.

“Yes, I do. We sell them. Thank you,” the cashier said, her expression giving us the impression she must have come in contact with some form of stimulant in the last half hour or so. “That’s a cool-looking kid in that photo on your brochure.”

Elizabeth lunged at the cashier, her hands tugging at the woman’s collar, pulling the woman toward her. “It’s not a brochure,” she said through gritted teeth.

Through puckered lips and throat constricted by Elizabeth’s grip, the cashier was able to squeak, “We’re not supposed to call the stuff we sell here anything but brochures. It’s corporate policy. You’re the fifth person to do this to me today. If you don’t let me go, my supervisor’s going to come over here and if you tell him what I said I’ll probably be fired.”

Elizabeth released the woman, but she wasn’t entirely satisfied with her explanation. To be fair to Elizabeth there was something dishonest about the place and everyone in it. I got to thinking the cashier was no doubt a pawn in it all, but she may have known more than she was letting on, may have had more of a role in the operation and was just trying to save her own skin. People relied on other people to be sympathetic. It was one of humankind’s most important survival mechanisms.

I sensed that Elizabeth was about to verbally castigate the cashier and so I moved toward the exit, hoping she’d follow.

“Have a wonderful brochure day with the many brochures you’ve paid for, and have a brochurrific day,” the cashier hollered after us. Elizabeth, to her credit, did not acknowledge the gesture.

It was still snowing outside. There must have been at least six accumulated inches now. Plows were double-timing it down the main roads, bits of salt landing in their wake.

When snow reaches a certain height it begins to feel as though it will soon absorb you, take you and make you a part of its frozen essence. This, I think, is why people hurry even more through snow storms than other kinds of inclement weather. I have no proof of this other than what amounts to a “very strong feeling.”

Elizabeth thought it was at least mildly foolish to be placing placards and bulletins around the city in the midst of heavy winter. Why not start a website featuring the image of the boy? Why not, indeed. I hadn’t thought of that. The internet, a way to share information with the masses in the blink of an eye, a way to surf the web, to travel the information highway, to meet the rest of the world at the touch of your fingertips. I didn’t own a computer, and it’s fair to say all I really know about the internet could be said in cliches dating back to the mid-nineties. As unlikely as it sounds, the truth was, I asked my uncle, a software engineer, to search chat rooms for people he thought I might be romantically interested in. He used Craig’s List instead and became pen pals with Elizabeth for me, whose correspondence he would print and physically deliver to me and I would hand-write responses that he would then electronically transcribe. He finally said he would no longer assist me with this, as some extraordinarily outmoded middleman, and that’s when I decided it was time to meet Elizabeth in person.

Perhaps I would see about this computing option, by way of my uncle. I disregarded it at that time with the thought I would politely bring it up again, giving due credit to Elizabeth, later when It would feel less embarrassing that I hadn’t considered the option in the first place.

And there we were, in person, outside, with our expensive placards and bulletins (no, Just Brochures is not affordable by any stretch—although the quality of their materials is average to below average). Neither form of notice was likely to last long in these brutal weather conditions. Elizabeth and I taped or nailed our notices to the lampposts and electric poles that people were likely to come across.

A man walking in the dark, out of the light of the lampposts, for instance, seemed to be approaching us. I imagined he was going to ask us for a light, or the time, or directions, something bland and traditional. He might also have wished us physical harm, or at least wished to make our valuables his own. In any case, he did approach us. He did ask a question. He wanted to know who we were voting for in the upcoming mayoral elections. We both said we were undecided, though Elizabeth voiced skepticism regarding the policies of the incumbent.

“He’s a good mayor, the incumbent,” the man said. “Let me tell you, I should know. I’m the mayor, the mayor is me. He’s a good fella. Frank ‘The Ram’ Mertington, Mayor Mertington. That’s me. Vote Mertington. Vote for The Ram! I’m a good mayor and a helluva guy and a lot like a ram in some ways. I’m completely comfortable talking to you right now, totally at ease. This is normal and natural for me.”

“Why are you out in the snowstorm like this?” Elizabeth asked.

“That’s what you do when there’s an election coming up, you get out and you press flesh from beneath layers of fabric and other material.”

“I wouldn’t think there’d be too many people, gloves or no gloves, to shake hands with out here, though,” I said.

“Well I found you two, and that’s something. I’m the mayor. I want to know about your problems. I want to best represent you at city hall. There’s no other good reason to be mayor but the ones I mentioned. So do me a favor, tell me your problems?”

I pointed up at the bulletin we’d just attached to a lamppost. “See that? That’s our problem.”

Mayor Mertington looked up at the bulletin, appraising the picture of Anthony and what it all meant.

He began ramming me with his head, apparently this was among those things that made him like a ram in some ways. I slipped in a snowdrift and tumbled backward into a parked car. He started kicking me while I was on the ground and didn’t stop until Elizabeth beat him back with a placard. She’d gotten him good in the face with the placard, so much so he was suddenly laughing up blood, apparently pleased with the way he’d been bested, though still somehow remaining angry.

“I should have known you two, with your beards, you’d want to know why? Why you have been punished with a Santa suit? I’ll tell you exactly why. I know exactly why. And then I don’t want you whining about how life’s unfair. We know it’s unfair and we don’t need you whining. Some people get to be mayors and some people are forced to take their punishment in one form or another, say a Santa suit the whole year round or more.”

“Ah, I know that answer, too—but I won’t tell. I don’t have to. I’ve got something you want. Vote for me and I’ll be sure to let you know the whole story, if there is one. Which there may not be. Just vote for a ram in the next election, and I don’t mean write in ‘ram’ on the ballot, obviously. I mean, vote for me.”

The mayor’s handlers sped up to us in a snow plow on the street, which made it seem like they’d never been far away and even gave the impression that the mayor and his handlers planned our encounter as a means of securing votes. Impossible, certainly, but not feeling totally impossible in that moment. As I recall the events of that evening, I’m still left wondering if the mayor could have had more of a hand in what transpired than is generally considered within the realm of what human beings, even powerful human beings, are able to do.

Mayor “The Ram” Mertington looked like a raccoon, with those dark concentric circles around his eyes. I didn’t trust raccoons and I didn’t trust Mertington. To be fair, his administration had been known for its wild and flamboyant corruption. Elizabeth and I decided to learn more about him considering he was exploiting our curiosity shamelessly, cynically, for votes. I certainly had not forgotten the horrendous beating he’d meted. My torso was still sore from his kicks and his ramming me in the ribs, like a ram.

Matt Rowan lives in Los Angeles. He edits Untoward and is author of collections, Big Venerable (CCLaP, 2015), Why God Why (Love Symbol Press, 2013) and another, How the Moon Works, out now from Cobalt Press. His work has appeared or is forthcoming in Cosmonauts Avenue, TRNSFR, Always Crashing, HAD, Spork, Necessary Fiction and elsewhere magazine, among others.