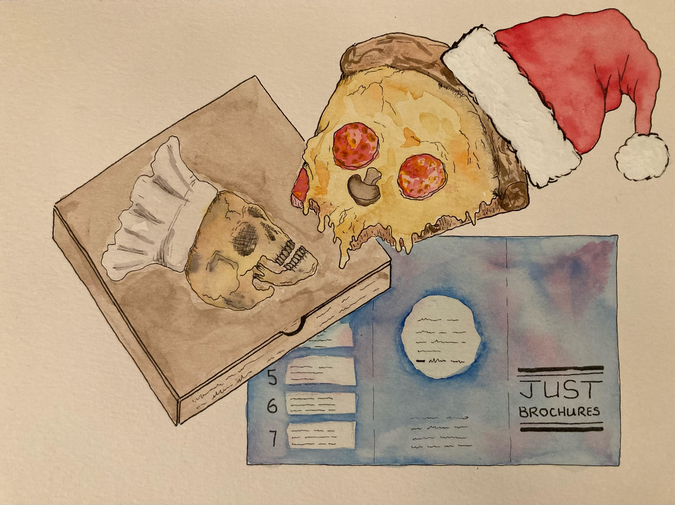 Must Be Santa, Santa Claus

We were back at Coffees-a-Million and Elizabeth was showing me how to use the internet. She was a bit confused by my lack of knowledge of the subject, but she seemed to find ways of reconciling the incongruity in her own mind.

The Coffees-a-Million graveyard shift seemed less vigorous than their daytime counterparts, though occasionally a giant hand would slap from nowhere, almost gently, almost soothingly, as though caressing, and then be gone like that. I don’t know if they were languid from lack of sleep or merely impartial about the work of the place, and as a result, more mechanical in the performance of their duties.

“It’s really interesting the kinds of things you can learn with just your fingertips and a computer screen and an internet connection of some varying level of speed. This is all available to the public here, huh?” I said, knowing I was taking a risk by admitting a great deal of ignorance regarding all things America Online. She certainly looked put off by my questions, scrutinizing them internally and raising all kinds of questions of her own, which she was keeping to herself, for now.

“The internet is so much faster than it was when modems had dial up internet connections and life was so simple and challenging.” I figured if I kept talking I might be able to lessen her suspicions, but it seemed all my words really did was heighten them further.

“I like the internet. I’ve met so many interesting people. You were one of those interesting people. You said so many interesting things. You sounded like a man of convictions, and depth, and all sorts of things I haven’t seen at all this evening, despite your monomaniacal concern with whether the boy you hit with your car was put there on purpose or it was a random and single specific instance of violence, that you perpetrated due to your own actions and no one else’s interference.”

“Yes, well, when I have gone on the internet—to talk to you basically exclusively—I’ve found the words I didn’t know I was able to speak, or something. Obviously what I’m saying to you right now would be much more eloquent if I were typing it to you on the internet.”

“Why don’t you? Write what you’re meaning to say. I want to know for a certainty that those words you wrote with such feeling were actually your words. If I can see that then maybe I’ll have an easier time understanding why you’re so concerned about this conspiracy that obsesses you.”

“You want me to prove that I was the one who wrote to you? You’re questioning that on our first date?” I was pushing it, but I felt justified. My whole life, really. The decisions I made were always justifiable.

“It should be easy. You should have no trouble doing it and this is not some ridiculous request. How do I even know you’re who you claim to be? I’ve already committed so much to you, over one date, I’d say this is the least you could do to demonstrate that same commitment.

I was so mad I started to type her something, something that would knock her socks off (I even used that phrase, about how her socks would be).

I suppose I wished I’d written more often. It would have been easier to express the thoughts that seemed so easy to articulate in my own mind.

I stared at the words on the monitor, noticing how many times I’d written I was sure she’d have her socks knocked off. Fifteen times, I repeated the phrase. I’d mostly repeated that phrase, actually. I think I said something about how trustworthy I was, too, figuring my uncle would have emphasized that about me. I had a hard time thinking of what other good qualities about me he might have cited, although coming from him, they’d have all been works of fiction. My uncle was not my biggest fan, and actually it’s hard to believe he was willing to do all he had done for me without some ulterior motive. This might have been it, the opportunity to see me fail profoundly in this relationship as my fraudulent behavior was exposed. I could have been anyone to Elizabeth, and I hadn’t a single clue who she believed me to be.

I moved over to let her see what I’d written, quietly brooding over my cup of coffee while she read. She stood moments after she’d finished and in what felt like one singular, swift motion grabbed the Coffees-A-Million arm from an employee gently nudging a patron who’d been putting packets of Silk into her coffee, and proceeded to strike my coffee from my hand and into a portrait on the wall nearest the restrooms, startling a man exiting the lavatory and spraying him with its ceramic shards.

“Now look what you did,” I said with a cliched kind of obvious indignity.

“The only thing that was at all reminiscent of the notes you’d written me was your repeated use of the phrase ‘knock your socks off’. Otherwise none of the erudition, charm, wit, any of it, was present. You’re an imposter.”

“You can’t know that, you can’t know how long it normally takes me to crafts my various missives,” I just kept on lying. It seemed like the thing to do.

“I can’t believe I let myself get taken in with all this. I can’t believe I’m wearing a Santa suit because of this. Who really wrote your emails?” Her Santa beard swung wildly as she shouted at me.

“I wrote them, but my uncle transcribed them to the internet. And he may have editorialized a little bit, in his various transcriptions. But I guarantee if your socks were knocked off, it was because of me. I was that inner substance.”

She wrenched the handle from the listless employee and hit me in the face with the Coffees-A-Million hand. Then she stormed out the door, although not before wrenching her laptop from the table, its electrical cord pulled from the outlet and whipping me in the face for one final embarrassment.

I decided I wouldn’t follow Elizabeth out into the cold, cold night. I had a lot of meditating about the mayor to do. I hated that our relationship had fallen on hard times, but I had this hope our problems could be mended, all our issues, before too much time passed. I knew she’d be impressed if I got to the bottom of the business with the boy, even though she was never quite as invested in solving the mystery as I was. She definitely seemed to think it was unhealthy, my pursuit of this end. Perhaps it was. Perhaps solving all my problems was somehow bad for me, solving her problems, too. I needed to vote for the mayor, unfortunately. It was the easiest way for me to get what I wanted.

And so ended what had been a very long day.

The next day was Election Day, and I made the decision to vote Mertington, despite his many flaws.

I decided voting for him meant more than just finding out about the conspiracy against me and whether there was significance to the boy's seeming appearance and reappearance in so many places. Was the boy a boy made of clay and by being tossed in front of cars was he meant to entrap people in Santa suits for some grand but awful purpose?

The voting booth was cold to the touch. I'd inserted my card and selected the mayor as my choice. The card popped out of the voting machine and I handed it to an awaiting attendant. An attendant who'd told me I'd "done it," should be "very proud," and gave me a slip of paper certifying my participation. It looked like the city had spent a lot of money on these certifications. They had gilded edges and appeared to be fancily handwritten with a calligraphy pen.

The attendant told me to go to the "Applause Room" which sounded strange and concerned me.

The Applause Room was exactly what it sounded like, a room—or smallish gymnasium—where people applauded virtually anything with only the slightest provocation. Mertington was there, basking in their applause. He feigned ramming me but actually collided fairly hard in my tender rib cage and I buckled from the pain.

"You did it! Yes you!" The mayor shouted, though he didn't seem to recognize me.

"I voted for you, all right? So will you finally tell me what I wanted to know?" I liked the applause but I wasn't about to let it distract me.

"Come again? Oh right! You were the guy putting those signs up on the street. I recognize you now," the mayor said, and I knew he had been only pretending not to know who I was, what I was really there for. I mean, I was happy to be told I’d done a great job, actually.

And though I recognized the mayor as the dirtbag he was, I really couldn't deny the pleasure I felt because of his responding to my presence so favorably. It was like the one time my father said I'd done right by him, the time he had asked me to lie when the police came to our door and asked if I knew where my father was. I'd been instructed to say I hadn't seen him in months. I did. The cops kept warning me about how dangerous a man he was, that he was sure to kill again, there was no reason to think he would “spare me just ‘cause I was his kid.” I still didn't give him up. And that night while I lay bleeding profusely on the kitchen floor, my dad having thanked me but saying "no witnesses," I couldn't get over how good it had felt to have won his praise, finally. I was saved by a neighbor, but I beamed with pride at the feeling of being my father's son. He died in a gunfight with the authorities a few weeks later, but not before killing again, which I do regret that part.

"The truth is, my man, that you hit a boy, that boy died and you're now facing your punishment, but at least you got to exercise your right to vote!" Before I could utter a meaningful syllable, the mayor's handlers moved me to a seat among the rest of the massive audience, who clapped and audibly cheered for me the whole way there, absorbing me quickly.

I felt great, like I'd done something really good for the second time in my life.

And I clapped for the next person that walked in, who was, I should not have been surprised, my dear Elizabeth. I would have recognized her Santa suit anywhere. She was angry at first but slowly warmed to the mayor. She'd wanted answers like me and he gave them to her, even if they weren't exactly what she'd probably wanted to hear. She left him smiling like I had, his handlers leading her to a seat near mine. She refused eye contact with me, but I could tell she was happy by the way she clapped for the next person who entered the Applause Room.

Matt Rowan lives in Los Angeles. He edits Untoward and is author of collections, Big Venerable (CCLaP, 2015), Why God Why (Love Symbol Press, 2013) and another, How the Moon Works, out now from Cobalt Press. His work has appeared or is forthcoming in Cosmonauts Avenue, TRNSFR, Always Crashing, HAD, Spork, Necessary Fiction and elsewhere magazine, among others.