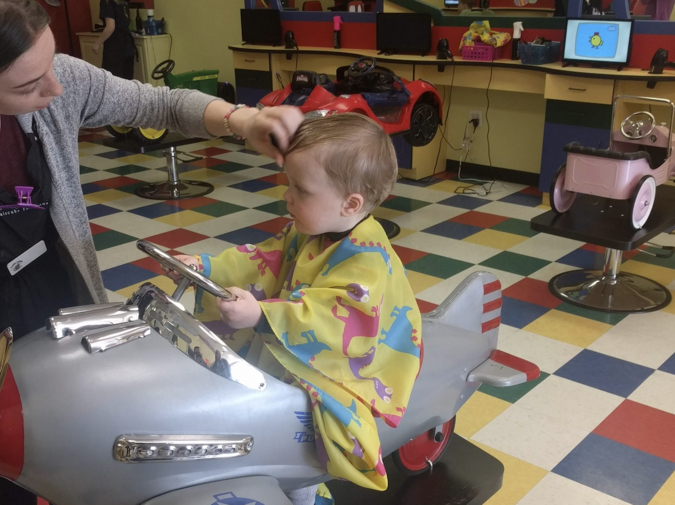 We’ve taken our son, my wife and I, to get his first haircut. He is nearly two, and once I place him in the seat they’ve fashioned from a toy airplane, they play him some Elmo to placate him—oddly enough, the only Elmo content on Netflix US is a British series called The Furchester Hotel, strongly influenced by Fawlty Towers—and as he settles into his typical zombie trance whenever watching Elmo, I’m struck by this moment, that something as simple as a haircut has taken on an entirely new meaning. This is, after all, his first haircut, and along with all the other firsts has a certain kind of heft to it, a weight you can nearly feel in your hands. They place the first snip of hair in a tiny plastic bag and give it to us as a memento afterwards, a custom that is simultaneously moving and absurd. We place it in a plastic folder that contains things like birth certificates and insurance information and deeds and leases and contracts. Somewhere we will find it again one day and perhaps be freshly amazed at such a thing.

I think: which of these firsts will actually prove to be foundational for him? What will be, if you will, his first first, the very first thing he will remember? I cannot choose this for him, and neither can he, but all of the firsts we’ve celebrated with him—first tooth, first word, first step—have, for him, already vanished into some mysterious ether. They are gone forever from his mind. When I was slightly older than he is now, I had a hernia operation. I can recall being carried down a corridor to the operating room, being offered a balloon, and swatting it away out of anger or fear. This is a false memory, something my brain has made up wholesale, and I know this because this memory is actually in the third-person: that is, when I think of this moment, I watch myself being carried down this corridor as though the whole thing’s been recorded, as though I’m watching a movie of my own life.

There are a handful of these types of memories for me, false memories that have stuck with me through the years. What, after everything ahead of him, will remain with my son? What will he forget, what will he make up? And beneath all this, I suppose, are questions about myself: What were my own firsts, what are the things I have already forgotten? What are the things I will forget? My boy will one day grow up, having left all this behind him, but I will hold it forever like a historian trying to piece together the personal history of two separate people contained in the single body of my son.

It’s just a haircut, I tell myself as we drive home, our baby suddenly transfigured into a little boy, but I am nonetheless struck by its immensity, its transcendence and immanence, its closeness and terrible distance, that it is large, it contains multitudes, that everything, it seems, can be found in something so simple as the cut of a pair of scissors.

Austin Ross's work has appeared or is forthcoming in Hobart, Necessary Fiction, JMWW, and elsewhere. Follow him on Twitter @AustinTRoss or go to austinrossauthor.com for more.