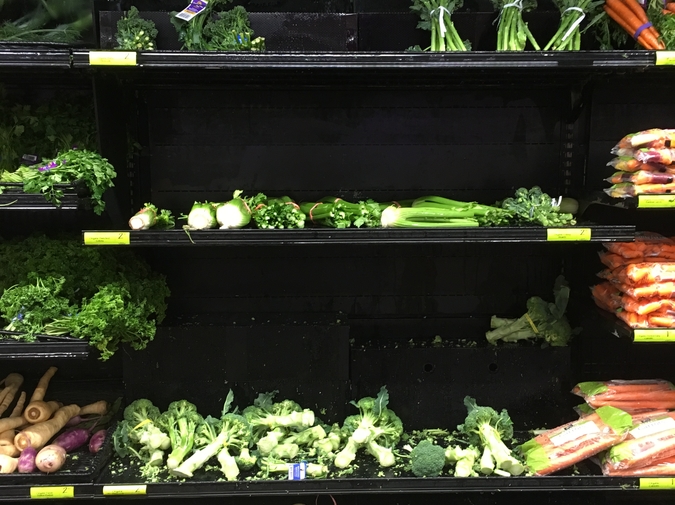 Nobody knows Ralph has a flask tucked in his front shirt pocket. His blue Hi-Mart vest hides the bulge it makes beneath the fabric. It is nothing, usually, to excuse himself during his shift and use his smoke breaks to nip a little vodka from the flask’s bright, cold mouth. The other employees, as they suck on their cigarettes and stare dead-eyed at their phones, pay him no mind when he huddles in the corner by the dumpster to down a swig.

The flask is there, full and ready, when Ralph assumes his station for the day. His office: a wonky card table beside the cereal aisle, bending beneath the weight of a small portable stove, a beat-up nonstick pan, and a pyramid of egg substitute called Leggendary. Most days, management gives him the dying remnants of the produce aisle to work with, food that will otherwise be thrown out. But this morning Ralph finds at his station a slew of fresh ingredients: whole lemons and limes, dimpled and technicolor, crisp parsley, horseradish cream, celery, olives, papery garlic, and a jug of V-8 Splash tomato juice.

A gleaming metallic Kitchen Aid knife, fresh from its packaging and still smelling of plastic, sits atop a clean cutting board, the thick kind with rubber grips at the base to prevent sliding. None of the cookware is chained to the table like usual. Ralph touches the flask pressed to his chest for reassurance.

He hesitates. His normal routine is vegan omelets of skunky asparagus and arugula, which he must divide into flimsy transparent tasting cups with a plastic butter knife. Around him, listless shoppers and their broken carts rattle by: a young woman in dark blue scrubs on her way to the dairy aisle; an elderly couple arguing breathlessly over cabbage.

His habitual disdain for Hi-Mart shoppers fades slightly as he wrests a clove of garlic from its siblings. It has been forever⎯his associate’s degree program in culinary arts⎯since Ralph has felt the cracking clove beneath a knife’s strong blade. The swollen leaf pops beneath Ralph’s palm, releasing its sulfur. Ralph rolls the parsley into a bundle, slides the knife through until the bitter bunch is almost pulp. No, it wasn’t college. It was Vietnam. Those reddish-purple bulbs he’d bribed from the locals with a quart of grain alcohol.

The V-8 turns the egg substitute a muddy orange, but the smell is citrus and grass. It firms up supple around the sautéed vegetables. It is the most colorful thing Ralph has made with his own two hands since he lived with his brother after the war, before he crashed his car into the side of the house where his niece slept.

Ralph plates the omelet on the paper Dixies he’s been provided. The stack of sample cups waits patiently by the skillet, but he cannot bring himself to cut this masterpiece, to diminish what it is, to dismantle it into parts. He garnishes it with oily green olives and a squeeze of lime. He places it on his now-soiled cutting board like a trophy.

When he looks up there is a woman watching him. She is young and fresh-faced in expensive athleisure, her yellow hair tied in a knot at the top of her head. Ralph usually works an eight-hour shift without speaking at all. But on this miraculous day he smiles at her, lifts the plate and asks if she would like a sample.

A look of passive politeness washes over the woman’s face, a tight-lipped smile between strangers.

“Oh no,” she says, picking at a loose thread protruding from her leggings. “No, I was just hoping you could tell me where I could find the organic peanut butter.”

“It’s not on the aisle with the normal peanut butter. That’s probably detrimental to sales, if you want to tell your supervisor that.”

“Organics,” she repeats with a decisive nod. “Yes, that makes sense.”

She hovers for a moment, looks curiously at Ralph’s creation, and gingerly takes a carton of Leggendary from atop its pyramid. She walks away with the product still in-hand, her empty shopping basket dangling from the crook of her elbow.

Ralph watches her go, picks up the Kitchen Aid knife, and slices the omelet into even squares, the flask sliding forward in his pocket as he moves. Of what he has made, he doles each portion, like medicine, into their plastic cups.

Caitlin Rae Taylor lives and writes in the American South with her partner and their very loud hound dog. She received her MFA in fiction from the University of North Carolina Wilmington, where she served as the fiction editor for Ecotone and the publishing assistant for Lookout Books. She is currently the Managing Editor for the literary magazine Southern Humanities Review. Her work can be found or is forthcoming in Germ Magazine, the Alabama Writers Forum, Moon City Review, and the Adroit Journal.