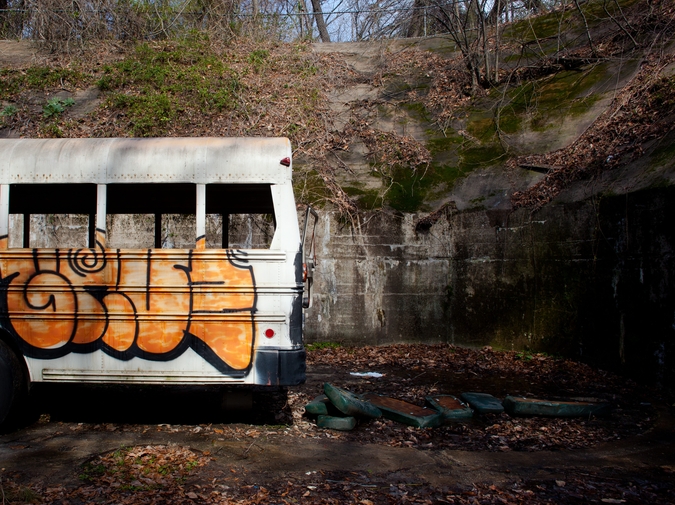 Ask for a skateboard for Christmas. Pick it part-by-part from the skateshop near Needle Park.

After, go to the Combat Zone to buy hip-hop clothes. Walk close to Dad. Call him “Dad” real loud so people know the black guy is your father.

Get a hat a rapper had on a tape cover. Wonder if a skater like Josh would wear it.

Skating is for white guys in the suburbs who aren’t preps. Rap is a difficult correspondence course on how to be black.

In the car tell Dad, “I’m getting into skateboarding because girls like skaters.” Watch him laugh knowingly and squint out the windshield. Don’t mention that guys who like rap want to fight when girls who like rap like you.

This is the first Christmas where there are no surprise gifts. Sit on the couch, skateboard scuffing slippers. Roll across the flat part of the street. Rear foot slaps the tail to the ground, front foot slides up, board see-saws into the air: suburbs get shorter.

Leave a message on Josh’s answering machine. Wonder if he went out of town. Speak quietly so Mom doesn’t hear and ask, “Why don’t you guys hang out anymore?”

Regret telling her “He’s too busy with his girlfriend” because now even Mom thinks you’re a loser who can’t get any.

Be glad you didn’t tell her that his new friends, skaters like Alex, smoke weed. Or that he’s friends with the preps. Last time they’d come up was fifth grade at the sledding hill, your tube aimed at them, you shouting “Kill the preps!”

Mom was self-conscious because her father was an Irish mailman and now she was in a town full of doctors and lawyers with her black husband and sorta black children.

The lines had been drawn, but were getting erased.

Be self-conscious, too. Go to Josh’s on the thirtieth. Look at his Led Zeppelin boxed set. Say, “Are they ‘Smells Like Teen Spirit?’” when he pulls out a Fugazi tape. Crawl under the boxed set when he says, “No, idiot. That’s Nirvana.”

Wonder how he knows about these bands when all they play is fucking Mariah Carey on the radio. Wonder about last summer when the front door slammed behind his sister’s boyfriend and she walked into the kitchen, licking her teeth and tucking her shirt so her boobs pushed down then bounced. He called her “slut” and she swatted his ear. Remember that Josh broke up with green-haired Angela when she said that her true love Jim Morrison was gonna kick his ass in heaven. Figure he’s guaranteed to get to at least first base at midnight on New Year’s.

Spend New Year’s watching a James Bond flick on TV while Dad describes the sex scenes that got edited out. Bug him and Mom for a couple cups of champagne. Announce, “I need to go fart” and run into the dining room to rip one by the hissing radiator. Strut back in as Mom is pouring the rest of your drink into her glass. Wonder what Josh is up to. Picture an identical den, but full of seventh graders, draped across the couch, propped up in Dad’s green armchair, all making out.

Shine with the newfound ability to ollie. Wear plaid Skidz pants, hoodie over Thrasher t-shirt, board under arm, new hat digging into forehead, Walkman on the bus on the way back to school.

The prep across the aisle lifts an imaginary headphone from his ear and asks, “What are you listening to?”

“I thought all you skaters just listened to classic rock.”

Flash over tapes and CDs, plastic cases shining on Josh’s floor: Led Zeppelin Nirvana Fugazi. Real skater music. At least this prep can tell what you are.

The skaters stand in a knot in the school hall, heads leaned in like streetlamps. Circle them. Nod “’sup” to Josh. He nods back. Nod again. No one makes space in the circle, but see Alex looking. Hope he says, “poser” so you can ollie a snowbank then hug Angela while her army coat’s unzipped. Instead, Alex puts his arm around a preppie girl who is now dressed in bellbottoms and a long, knit Fresh Jive hat. Go to class. Take off the rapper hat before the teacher takes it off for you.

Wait for the bus and teeter on the skateboard. Feel a push and the board shooting away. Catch air again, hovering while seventh and eighth grade faces turn. Land on your ass, impact synched with the board knocking into the school steps. Tamp down the pain, then the humiliation. Look up. Damian, who showed you how to Kid ‘n’ Play at the Halloween dance, looks surprised. “Yo, I’m sorry. I thought you’d roll away when I pushed it.” Believe him because it’s easier than punching a six-foot-tall seventh grader who wears Comb-Thru Texturizer. Bare teeth and smile. Stand up. Road salt sprinkles down when you high five. Don’t answer when he says, “Why you ridin’ one of them now?”

Chris L. Terry is the author of Zero Fade (Curbside Splendor, 2013), which was on the American Library Association's YALSA BFYA, plus Slate.com and Kirkus's Best of 2013 lists. He lives in Los Angeles.