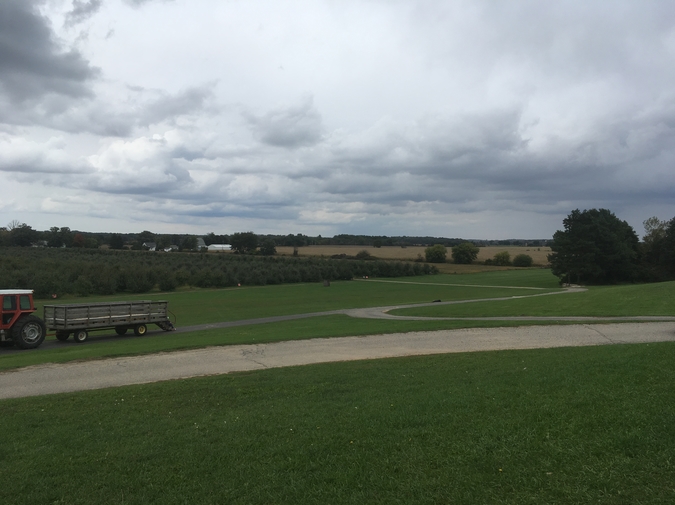 Herbert Mueller fell off his tractor, bumped the gas on the way down. I saw the whole thing from my sunroom, how the front wheel pinned his legs, shredded his muddy jeans then tore through the rest of him. How he screamed and beat at the tires with his fists until his head popped like a water balloon. Of course when the police arrived with his wife Sheila—gray blanket on her wiry shoulders—I told them all he went fast and peaceful. Didn’t feel a thing.

We’d been intimate once. Way back. Herbert spent his whole life out in the bean fields, nearer me than Sheila. I watched him every day one summer roving by on that great red machine, dredging the same ground again and again just for a glimpse inside my windows. I started to spend more time in the sunroom, wore short dresses while reading or tanning. One day he stopped being coy, drove his red tractor right up onto my gravel, swung the door without a word and came for me. I was ready. He was so beautiful.

Herbert’s movements were wild, but no matter where his hands went his eyes never left the window. When he was done Herbert pulled out a handkerchief and wiped his forehead. He never really saw me, just buttoned his pants and left me there, sprawled and undone. The next day Herbert was back to over-plowing the fields. Like we weren’t now some part of each other.

You’d think it was revenge how I watched him go, phone in my hand and those three numbers dialed, green button never pressed. That in my age I’d want to confess. But as the wheel slowly ripped Herbert’s skin into strips, what I really wanted was to let him go. Bury him so deep I’ll forget I’ve ever been touched.

Caleb Tankersley is the author of the chapbook Jesus Works the Night Shift. He has won the Wabash Prize from Sycamore Review and the Big Sky/Small Prose contest from CutBank. More of his work can be found in Carve, The Cimarron Review, Puerto del Sol, and other magazines. He is the Managing Editor for Split/Lip Press and lives in Seattle.