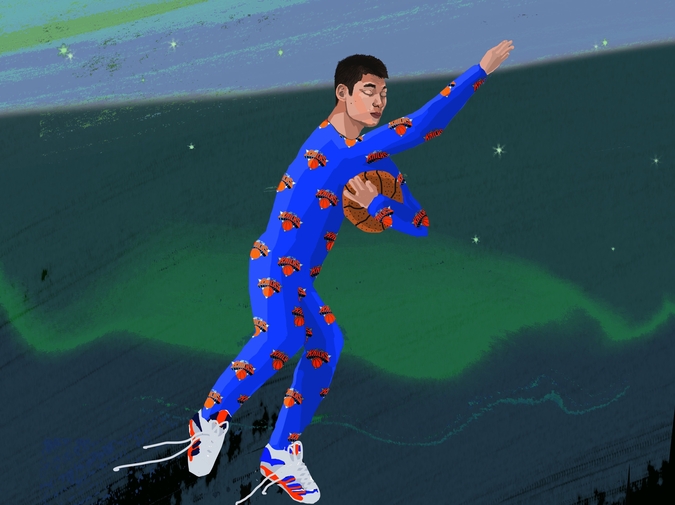 You’re listening to an audiobook about the history of the Mercury space program when the car accident happens. It’s so fast you barely react, barely even comprehend what is happening. You feel your front bumper drop onto the road, grinding against your tires. The car in front of you spins until your hoods touch. There’s an Asian man inside. His car is totaled. There is no blood. He looks at you for one brief moment of recognition, then his head dips forward and he passes out. The audiobook narrator drones on about Ham and Enos, the first chimps launched into outer space.

You’re in the middle of an intersection and, unsure of what to do next, open the door and step onto the road. The other vehicles inch around you en route to the Indiana State Fairgrounds, a massive facility resembling a football stadium, only it houses show pigs and gun shows and other Midwestern oddities you don’t quite understand. You’ve only just moved here from Pennsylvania, so different from this alien landscape: flat, blocks upon blocks of abandoned houses then a quick swath of mini-mansions, sprawl everywhere. You rub your pulsing neck. The crash becomes clearer now. You see a luxury sedan facing the opposite direction of your car. Its front end is smashed inward like a deflated accordion. You see a black man inside. He gets out of his car. You assume this man was traveling northbound, that he ran the red light, that he totaled the Asian man’s car which then bounced into yours. You bend over to look into the Asian man’s car. It’s only then that you realize. This is Basketball Phenom Jeremy Lin. This is Your Beloved New York Knicks’ Global Sensation Jeremy Lin. This is Jeremy Lin unconscious and twisted in a husk of a four-door.

Reggie Miller looks inside Jeremy Lin’s car. The front end is on fire now, tiny orange wisps like a teenager’s facial hair. “Jeremy Lin was fleeting,” Reggie Miller whispers in your ear. “You will thank me for this. If he stayed a Knickerbocker you would have grown to resent him when Linsanity died and you were left with an above average point guard earning a massive salary. Now you will remember only the good times, the highlight reels. Destruction and rebirth are one in the same, Sal.”

You shake your head. You stamp your feet. “Jeremy Lin gave me hope that I might become a better person, that through the transformative power of NBA fandom that I could become more than what I currently am.”

“What are you currently?”

The next day, Reggie Miller arrives at your half of a duplex with a six pack of Upland Wheat, his potato head face all smiles and cheer. You eventually let him in, and together, you hook up the Super Nintendo and play NBA Jam: Tournament Edition while drinking on your Wal-Mart futon. Reggie selects the Pacers and defeats you again and again, again and again. When the final beer is finished, Reggie sinks back against the couch and releases a contented sigh.

“This is what I don’t understand about you diehard fans,” he says, eyes closed. “If the Knicks drafted me instead of Patrick Ewing, you would have loved me and hated him. The organization would have built around my playing style. All your bluster about loving the Knicks because they were tough nosed hooligans would have gone right out the window, and you’d be talking about my jump shot and ability to mess with opposing players’ heads. Am I right?”

“So you’re completely powerless to the whims of the Knicks’ front office. You have no choice but to root for whomever they tell you to root for. Am I right?”“You’re right.”

“If they traded Patrick Ewing to another team mid-career, and he came back to Madison Square Garden, you would have booed him. Do you realize what this means?”

“You’re rooting for uniforms. For clothing!” He stands up and moves toward the front door. “You spend hours watching these games on illegal internet feeds, reading all the comments on Knickerblogger, listening to the Basketball Jones podcast, livetweeting under the Knicks hashtag. Think of all the other things you and every other sports fan could be accomplishing. You’re wasting your life!”

You want to tell Reggie Miller about how you ended up a Knicks fan in the first place. When you were in first grade, you collected basketball cards even though you were too young to really follow the games or have a favorite team. When you decided it was time to pick an allegiance, you spread out all your cards over the living room floor and organized them by team. The three biggest piles were seven Bulls, nine Pacers, and eleven Knicks. You based your entire fandom on this random outcome twenty years ago, and you want to tell Reggie Miller this, how close you were to becoming a Pacers fan. You want to tell him that sticking with the Knicks for so long for so little a reason proves something vital about your character. When they were terrible for an entire decade, it would have been so easy to jump ship to Kobe’s Lakers or DWade’s Heat, but you stayed put. You remained loyal. It’s easy for people who live in the same city or even the same state as their favorite teams to stay fans, but for you, a skinny nerd from Scranton who only visited New York City once before high school graduation, this surely was a test of inner fortitude. You are loyal to the end, you want to shout. You haven’t wasted your life, you want to shout.

But you don’t shout any of this. You don’t do anything but watch Reggie Miller gently lock the front door from the inside and repeat, “You’re wasting your life.” He pulls the knife out of his back pocket. “You wasted your life.”

Salvatore Pane is the author of the novel, Last Call in the City of Bridges, and the chapbook, #KanyeWestSavedFromDrowning, both forthcoming this fall. His work has appeared in American Short Fiction, PANK, The Rumpus, The American Book Review, and many other venues. He is an Assistant Professor of English at the University of Indianapolis and can be reached at www.salvatore-pane.com.

Rachel B. Glaser is an artist and writer living in Western Massachusetts. To view more of her basketball paintings visit NBAPaintings.blogspot.com.