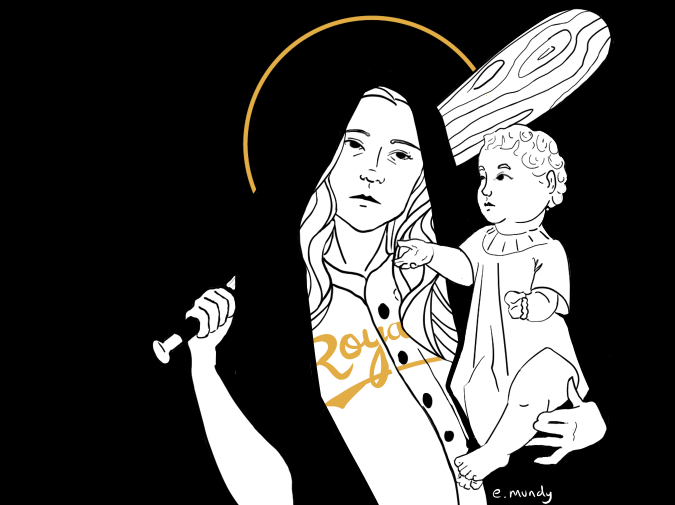 Take Me Out But Bring Me Back, Too by Rachel Mans McKenny

We were on vacation in Kansas City. Knowing I had never been to a major league game, my in-laws got my husband and me tickets to the Royals while they agreed to stay back at the hotel room with our six-week old. The baby was always colicky, and once we entered Kauffman Stadium I kept holding my phone in the air, trying to catch a good signal to see if there was news.

At the first notes of the Star-Spangled Banner, I stowed my phone. I hadn’t been to a baseball game since I was a child, back when minor league games were a highlight of every summer. Back then, my parents and I stayed, yawning, until the final inning and the post-game fireworks. Now, yawning after not sleeping well in weeks, I glanced at my husband to find he had caught my yawn.

We rallied and ordered twelve-dollar beers after the first-inning started, foam dripping over the side of the memorabilia glasses. I didn’t know the players depicted on the side, but I knew that I had missed clinking a beverage against my husband’s and knowing we had the same thing inside. I had assumed the lopsidedness of having children would cease after their birth. We were a modern couple, after all. We would split everything. I knew I had to be the incubator, but I hadn’t understood the encompassing nature of breastfeeding. At weekly mass, my husband and I knelt side by side. I had been baptized, confirmed, and married in the church—a cradle Catholic, but now things felt different. As I watched the priest hold up the host and transubstantiate the bread into flesh, motherhood made me understand the horror and beauty of that act. My husband changed diapers, he rocked the baby, but I was food.

By the third inning, I was enjoying myself. By the fourth, the sky began to lose its mid-summer brightness, I still hadn’t received any texts, and my head buzzed pleasantly after a second beer. Pregnancy had transformed my body over the course of nine months. On the positive side my now-low tolerance for alcohol made me a cheap date. Less ideal: the pale claws of stretchmarks tattooed across my stomach.

By the fifth inning, my chest began to feel tight. It is one thing to mentally unplug yourself from parenthood, but my body couldn’t follow the same directions. It was officially the longest stretch of time I had been away from the baby. I crossed my arms and begged myself deflate. At the plate, the batter connected, sending a cracking drive to the outfield. I tried to follow the play—a snatch, a toss to second, but my breasts felt like rocks underneath my shirt.

My husband noticed my pained expression. “Do we need to go?”

I shook my head. I headed for the restroom, the only private place I could think of, to relieve the pressure. It had a concrete floor and industrial metal stalls that reminded me of middle school. I stood in line with the other women, praying that when my turn came an end stall would open and I could at least pretend to be alone. Whoever the patron saint of public bathrooms is did not intercede on my behalf.

Sitting was out of the question, so I stood facing the stall door. In preparation I balled up a handful of toilet paper to catch any liquid. I ached, from my chest all the way through my armpits, but when I lifted my shirt, I couldn’t milk myself. Even the phrase felt absurd, obscene even, and I felt myself turning it over as I held my breasts in my hands. Like orgasm, letdown requires a kind of mental release that I couldn’t achieve, and I stood there in a cathedral of baseball.

Someone tapped on the door and asked if I was okay.

I flushed the toilet, without even really knowing why, and washed my hands at the sink.

When I got back to the stands, I tried to pay attention to the game—America’s Pastime. I could salvage the night, and I would with the same determination I had done everything in my life. I had rigorously plotted my cycle to try and get pregnant, so yes, I could focus for just an hour more on nine men on a green field. I could will myself to have fun, to let go.

A bat cracked in half and the Jumbotron zoomed in on a boy, sitting on his father’s shoulders, with an oversized mitt in one hand and a retrieved home run ball in the other. And suddenly I was leaking dark wet circles onto my shirt, and we left before the game was over.

By the time we got to the car, half a dozen texts from my in-laws blipped into my cell notifications. Suggestions to get him to take a bottle? Where r the wipes? Ignore that-- found them. I texted that we were on our way.

When we got up to the hotel room early, my in-law’s relief was palpable. We played handoff, said a hasty thanks, and within seconds the crying mouth of my child was on me again.

I knew, in an hour or two hours, the baby would wake up again and here in this strange hotel room, I didn’t want to ruin the neighbor’s vacation. My husband always hated when people rolled their eyes coming back from trips, saying they needed a vacation from their vacation.

My husband got ready for bed while I nursed our child, rubbing his soft hair with my palm. I mentally mapped my husband’s movements, his routine. Pictured him washing his face. We used to shove each other for counter space as we tried to do this in tandem. Splashes of water on the floor. I could hear him tap his toothbrush against the counter to get the rinse water off—three times, like he always did—and by that time the baby was nearly asleep. We used to brush our teeth together. We used to. We used to. By that time, I had stopped hurting so much, at least until he woke in two hours. The same game all over again.

Rachel Mans McKenny has been recently published in HAD, The New York Times, The Washington Post, Catapult, and McSweeney's Internet Tendency. Her debut novel, The Butterfly Effect, was published in 2020. You can find her on Twitter @rmmckenny, or at rachelmansmckenny.com