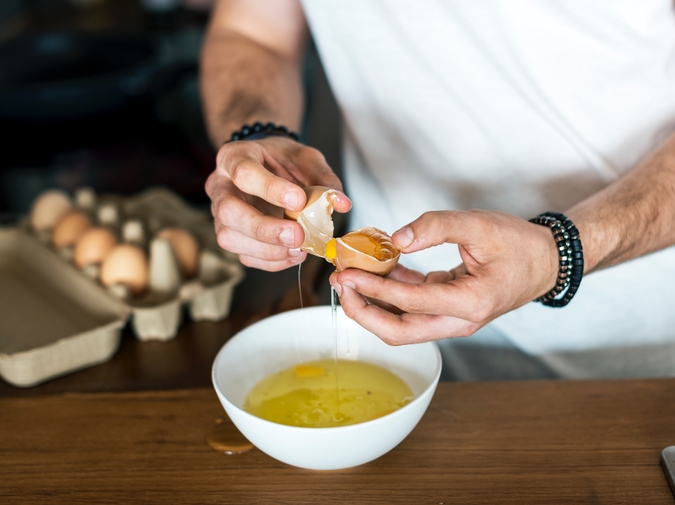 Ten Rules For Cooks on the Verge of Collapse

Ten Rules For Cooks on the Verge of Collapse[i]

1) Don’t call yourself a chef if you’re not one. Being a cook[ii] is respectable. Don’t be afraid of the name.

2) If you cook naked, you’re going to get your tidbits spattered (entry shortened; see suggested redaction in endnote)[iii]

3) Almost all seemingly-ruined meals can be salvaged if you add something. About 80 percent of the time, that something is wine. And if a meal is going to fail, let it fail spectacularly.[iv]

5) If you drop a piece of eggshell into your egg, use the shell itself to scoop up. The thinness and sharpness of the shell are perfect at cutting the viscosity of the raw egg (especially the whites)[vi]

6) Get an apron big enough to catch all your spills.[vii]

7) Master the art of substitutions.[viii]

9) Always have one trade secret.[x]

[i] See the OED: shrinking; breaking down; giving way; general prostration of the vital powers; a loss of courage, spirits; failure. See the polar ice caps. See the twin towers. See the ventricle of the heart that closes to a slit. See the subprime mortgage market, the moral foundation of Christian Evangelicalism, the Trump brand. See the deflated lawn ornament, the soda can beneath the heel of a boot.  See the way your father tilts and topples when the vertigo hits. See the way your husband fell to the ground when the neonatologist entered the hospital room. See you, see the definition in A.W. Lewis’s Woodworking Terms (1966): flattened, buckling like the cells of drying wood.

[ii] You tell yourself you’re not a writer. That’s for names bigger than yours, people with agents, book deals, job prospects. You haven’t had any job interviews. The last agent who took your full manuscript was the agent of a friend, and he stopped answering your emails. You call yourself a cook instead. Cooking means you’ll know how to get creative when the money runs out. You say this over and over, hoping the repetition will convince you it’s true, but you don’t believe it. You know what you are.

[iii] because you remember how often that happened to you, during the time before, in the beginning? Fucking and cooking and eating and laughing and fucking some more? Even now, you can put your finger on the small singed place at the top of your thigh, the little patch of skin wrinkled like a fingerprint because he couldn’t keep his hands off you when you were opening the oven to take the muffins out and he had his face in your hair and his mouth on your neck, and then he grabbed your hips and you fell into the door and you felt your skin searing, you smelled it browning like the tops of the muffins, but you still wanted him? You remember that, don’t you?

[iv] Burn the bacon. Burn the fucking (see endnote viii) pot roast. Burn the bridge to that friend you’ve known forever, but slowly, one board at a time. Burn the bottom of your new enameled cast iron pan and curse creatively, and remember that that too is a kind of writing, and be a little bit proud of yourself. Burn a CD mix because it reminds you of when you were younger and play “Adventures in Solitude” on repeat like you always do when you get like this. Burn your corneas in the blue light of the computer screen until everywhere you turn looks like frosted glass. Smoke the last of the joints your sister gave you until you burn the tips of your fingers. Add wine and wine and wine. It gives the bacon a sweetness and softens the edges of the charred roast. When you simmer it in the pot on the stove, it breaks up the charred bits on the bottom of the pan, and they float to the surface like scattered ash. The wine cushions the pot high in a bulbous red haze, where everything goes fuzzy, where everything swells and bleeds. It makes the writing worse but the sleeping better. Most of all, it eases the letting go.

[v] What your grandmother actually told you on your wedding day was more like this: a marriage is like a recipe. If you mess it up in the beginning, you memorize the messing, and then you’ll just repeat it. You remember the lipstick on her teeth, the soft patter of rain on the top of the tent that sounded like the crackling of a fire, the taste of blood as you bit your tongue and smiled at her. When she saw it, she patted your hand. Here, she said, and handed you a package. I crocheted you some potholders.

[vi] As Melissa Adler notes in Cruising the Library: Perversities in the Organization of Knowledge, this is a metaphor, but it’s also a method. The last sharp shard of your heart – broken like an egg inside your chest during the year and a half when you screamed at each other, when you cradled your pregnant belly and then your baby and you sat alone and sobbing in the dark – is still there, circulating inside the meal and every once in a while, you crack it between your teeth. The only solution now is to make the person who broke it dig that last shard out. The only thing for the reader to do is wait for it.

[vii] You have five aprons. All of them belonged to your other grandmother, the one who died when you were four, the one who took a decade to put herself through college by cleaning hotels and who was ashamed of it. Every time you put one on, you think of her – how she cleaned a thousand cum-stiffened sheets and a hundred vomit-splattered floors just to get her education and then had to get married and put on a smile and put on the aprons to make food for men – and you carefully smooth out the wrinkles, which are set in the cloth as firmly as grooves in wood.

[ix] Force yourself to say fuck more often. Make yourself scream rather than swallow it. Beat your feet so hard on the treadmill that eventually everything hurts worse than your wrecked heart. Put a pillow in your mouth when you cry so that you can let it all out but the kids won’t hear. Be the kettle that whistles, or you’ll be the one that boils over and scalds.

[x] Maybe you put nutmeg in your lasagna, a trick you learned from an Italian woman who made you swear never to tell because it was her grandmother’s secret. Maybe the girl at the coffee shop reminds you of the woman you want most but will never have, so you wonder if you will let yourself have the girl instead. Maybe you use chickpea liquid in your cake to make it fluffier. Maybe the brownies everyone loves come from a box. Maybe you won’t let yourself think of that one male friend as anything but a friend because your friendship means more and will last longer. Maybe even after everything, you still think your husband is one of the best men you know. Maybe it’s all of these or none of them or maybe it’s a single word, a word that you still can’t say because you’re afraid it’s the only solution.

[xi] You only need one: a chef’s knife, which you can use both heavy and deft. Use it to slice the salmon into thin fillets, to remove the chicken wings at the joint, but be careful to avoid nicking the bone. Use it to julienne the carrots, to run it around the edges of the cake cooling in the pan. Use it to lop the cork off the champagne at parties. Hold it in front of your face and pretend for a while it’s your smile. No one will notice. Keep it sharp, because might need it to make the biggest cut, the one that will sever things and let you start over. You don’t have to make the decision now. Just keep cutting the vegetables, slicing your stories down to their cores, letting the words of your friends carve you a new heart from the ether like the edible artists who can carve a radish into a rose. Play “Adventures in Solitude” on repeat while you cook. Let the lyrics cut you straight through: we thought we lost you. Welcome back. And then go to bed. Get up tomorrow. Do your work and your grieving. Do it all again.

Megan Pillow is a graduate of the University of Iowa Writers’ Workshop in fiction and is currently a doctoral candidate in the University of Kentucky’s English Department. Her work has appeared recently in, among other places, Electric Literature, SmokeLong Quarterly, and X-R-A-Y Literary Magazine and is forthcoming in Jellyfish Review, Longleaf Review, and Brevity, among other places. You can find her on Twitter at @megpillow.