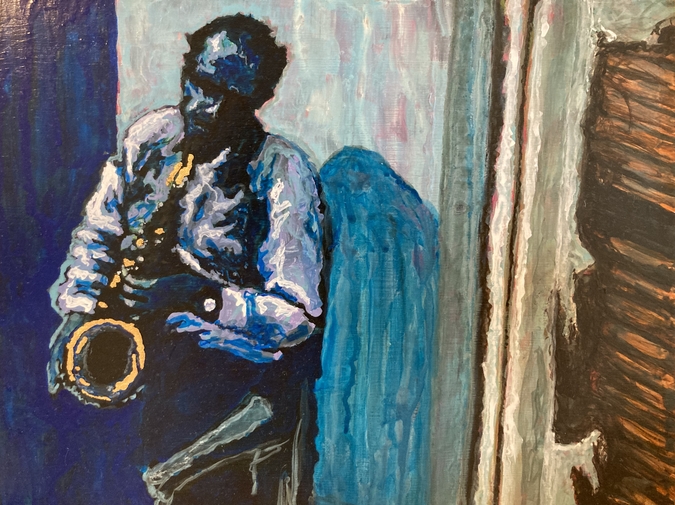 The Devil’s Interval: Memory and The Conversation

When you entered this particular Walmart, sandwiched right there between the entrance and checkout in such a way to practically present the idea to me, was a massive wall of foil-wrapped sports cards. I had several thick three-ring binders at home filled with 3x3 protective plastic sleeves, each stuffed with 90s icons. Around that time, Michael Jordan had left the Bulls for the first time. Nolan Ryan had recently retired. Ken Griffey, Jr. and Mark McGwire were entering their prime. It felt as though this recent obsession with card collecting had gripped me and every other child my age—and I decided that I needed more. Perhaps this was the reason; I no longer remember.

Stealing, it turned out, was simple enough work. I was wearing long sleeves that day, both thin and loose enough to allow me to—as I was pretending to idly sift through cards—slide a pack or two up my sleeve. The sleeves were long enough to let the cards rest in my hand as I cupped my fingers. Not a soul knew I had taken the packs—I’d decided for some reason to steal hockey cards, a sport I knew very little about—but, so wracked with guilt and fear that I would be found out, I tore the cards to pieces one night and flushed them down the toilet. For one horrific moment it looked as though they would clog the bowl, but they eventually went down in a final salvific gulp and I thought that I was at last done with it, that I was free. I had been delivered from this strange compulsion, or so I thought.

A tritone is a specific interval of music that’s particularly dissonant (think of the opening to Hendrix’s “Purple Haze”). It has been referred to as “the devil’s interval,” a name which originated during the era of Gregorian chants, when music was almost exclusively written for the church as an act of praise to God—meant to be beautiful as a reflection of the goodness of creation, not discordant. Tritones, while they have grown in popularity over the last several hundred years (particularly through jazz but also metal and a few other genres), still sound inherently dissonant. They bring with them a sense that not all is as it should be. And David Shire’s score for The Conversation is full of them. They set the film on edge, positioning it in opposition to the viewer’s comfort. Caul’s theme, for example, loops around and around, never quite resolving itself fully, leaving so much open still, so much room for lingering and unanswerable questions.

Coppola, even after the enormous success of The Godfather just two years prior, simply didn’t have the money to pay for a full orchestral score. Pivoting, Coppola turned to his brother-in-law, Shire, with the unenviable task of writing a score with nothing but a piano, which Shire himself would play.

Pitching it to Shire as the beauty of the solo piano and its intrinsic connection to the loneliness of Harry Caul, Coppola had Shire score hypothetical scenes rather than actual ones, and so the bulk of the score was written before a single frame was shot, the music layered in afterwards with increasingly apparent electronic effects. As the film progresses, the music grows more distorted. The score was crafted through a reliance on imagination rather than in response to the film itself, giving it a dreamlike significance, half-remembered and quickly fading though somehow haunting the memory for days afterward.

There would be several such pivots that Coppola would have to accept, particularly the fact that he ran out of time before he could shoot fifteen pages of the script. The editor of the film, Walter Murch, was tasked with putting the film together as best he could, but, like with Shire’s score only making the film more memorable, in the end the film is stronger for this sparseness—the additional pages would be nothing but bloat. “Most of what was dropped from the film,” he said in a recent interview at Filmmaker, “were scenes that had to do with the backstory, Harry’s other life.”

This backstory ultimately plays a role in the film’s final version, which pitches the audience a narrative very early on: Harry Caul is eccentric but ultimately level-headed; Ann and Mark, the couple he’s been hired to record, are in danger. And Harry, time and again throughout the film, buys into this exact narrative. We both see and hear this in the recording he made: He’d kill us if he got the chance, Mark tells Ann, referring no doubt to The Director wanting them dead for some as-yet unknown reason. This line is repeated throughout the film as Harry imagines the surrounding context, fills it in with his own nuance and shading. So intent on deciphering this single enigmatic conversation that Caul dreams himself revealing elements of his own childhood to them as though he were at a confessional: “When I was five, my father introduced me to a friend of his and for no reason at all I hit him right in the stomach with all my strength. He died a year later.”

It wasn’t long after I flushed those cards down the toilet that the urge to steal again returned. It seemed inevitable. No one had noticed the first time; I felt confident. I simply repeated my steps a few weeks later, stealing cards once again from the same Walmart, in the same fashion: idly sift through cards, surreptitiously slip a pack or two up my sleeve, carry on about my business.

We were running some family errands that day, and after Walmart we were scheduled to go to Best Buy or Radio Shack, I no longer remember which. But after leaving Walmart and walking next to my dad through the parking lot towards our next stop, I reached up to hold his hand, and his fingers wrapped around my wrist. We both heard and felt the distinctive crinkle of foil-wrapped cards.

The rest of our family went on ahead while he and I returned to Walmart. I don’t remember a single moment of this drive, but I remember what came after. When we arrived, my dad asked to see the manager, a man who was probably in his mid-thirties and who I believe had a mustache. He explained—very seriously—that in normal circumstances he’d call the police to deal with issues of theft. I remember pleading with him to not call them, that I’d never do it again. My neck felt like it was burning. I remember thinking at the time that if the police came, I would go to prison and my life would be over.

There are several moments like this in life, when you wish time would stop or could be rewound. Moments of instant regret, of infinite change. The knowledge that my father knew in one single instant exactly what I’d done filled me with a terror I’d not yet experienced, and which I can still access to this day. He’d slowly turned my hand over as we stood there in the parking lot, felt the card pack through the sleeve, pulled it out. What is this? he asked. I don’t recall what I said. Probably nothing.

I remember the first time I saw The Conversation. I was probably fourteen or so, far too obsessed with the overly opinionated and obstinate author and film critic Harlan Ellison, who pointed me, through his book The Glass Teat (or perhaps its sequel, The Other Glass Teat), in the direction of the film and said something along the lines that it was the best thing Francis Ford Coppola had ever made. Having recently seen and loved The Godfather for the first time, I found this dubious. Like Ellison, I was an opinionated and pretentious and insufferable little prick, but I nevertheless got a copy from the library and was blown away by the film, and in particular its minimalist and dissonant score written by David Shire. This was music that spoke to me, and was forceful in its calling despite the three decades or so that separated us at that first viewing. The innate sadness of Harry Caul mirrored a sadness many certainly experienced in the 70s during its initial release, and which I experienced in the early 2000s, and which so many have experienced in every decade before and since, for this is a sadness that dwells at our core, and we’d rather not linger on it too long or risk it overwhelming us. Its commonality to us all is so banal it hardly warrants comment. Yet Shire comments on it beautifully with a single instrument.

My punishment for stealing was that my dad took away my card collection. This seemed fitting—at least I wasn’t in jail. But the manager of that Walmart was just doing his job; he’d bought into a certain narrative about what this meant. It wasn’t his fault his job meant scaring the shit out of a little kid, wasn’t his fault that I would remember this moment forever. It was only years later that I realized how absurd it all was, that it was simply theatrics, that the manager was intentionally frightening me out of ever doing it again. The narrative shifted when I realized this, just as it shifted for Caul when we finally hear the real—or what we are supposed to believe to be the real—conversation in the square, an admission of guilt or at least intent on the part of Mark to Ann: He’d kill us if he got the chance. The precise nature of the relationship between The Director and Mark and Ann was not as Harry had imagined for so long. These precise motivations had remained hidden from Harry’s knowledge for so long, just as the motivations of a young boy who—for no reason at all—punched his father’s friend in the stomach remained hidden from him, or how the motivations of a young boy who for no reason at all stole a pack of cards is hidden from me. The precise details are fuzzy and imprecise and dissonant, too close together or too far apart, faintly perceived and perhaps not real at all. Like a string of chords on a piano, perhaps it’s the chase towards resolution that gives them meaning.

Austin Ross's fiction and essays have been or will soon be featured at Necessary Fiction, Lost Balloon, Still: The Journal, and elsewhere. He is an editor at Flash Fiction Magazine and a reader at CRAFT Literary, and lives near Washington, DC with his family. Visit www.austinrossauthor.com for more or follow him on Twitter @AustinTRoss.