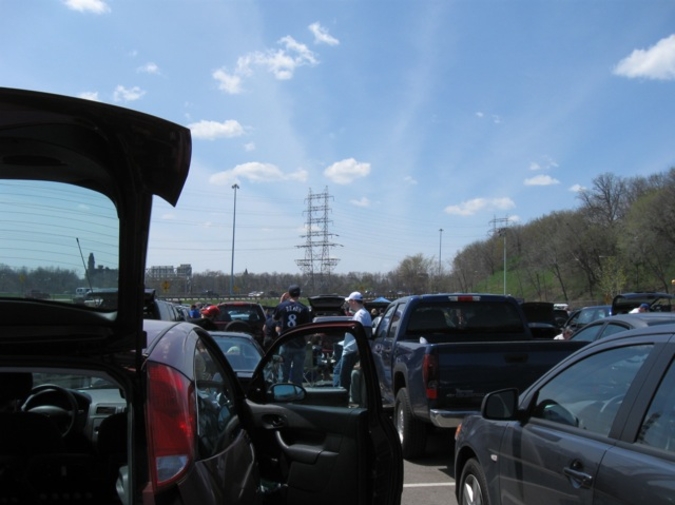 The Most Mets Thing That Ever Happened (That Day).

Are you fucking kidding?

It came down the last game of the season, which is what it is supposed to happen. The Brewers had to win and the Mets had to lose, and Milwaukee would clinch the wild card.

If they both won, there would be a one game playoff. That, or a hole would tear in the fabric of the universe, which seemed slightly more likely, given how each team had pissed away a combined 9 games of wild card and division leads in the final few weeks of the season.

CC Sabathia had been trotted out on short rest for what felt like the entire month of September, and he was on the mound again for game 162 against the Cubs. The offense spent the first part of the game completely absent, and I spent part of that part in my tiny Boston kitchen stress-baking what my roommate and I had come to call Sabathisnacks and shouting about how they were all (save CC) a pack of assholes.

Somehow, when people think of female sports fandom being sexy, I don’t think this is what they are picturing.

The pack of assholes squeaked it out thanks to an 8th inning Ryan Braun home run, and it came down to a fly ball in New York. A runner on, two outs, and the Mets would tie it with a home run. I could feel my sinuses begin to sting in the seconds the ball hung in the air, already anticipating the outcome. But I was wrong: the ball landed not over the outfield wall, but in the glove of a Florida Marlin.

For the first time in twenty-six years, longer than I’d been alive, the Brewers were going to the postseason. And I barely had time to celebrate before rushing down to Fenway with my roommate for that evening’s Red Sox game.

On our way to the gate, I almost collided with someone in my distracted happiness. He and I both stopped short. I looked up and saw the blue hat, the orange N and Y. And he looked at me and came face to face with the white M on my cap, the Just Brew It shirt, moments after his team had been eliminated, hundreds of miles away from New York and even further from Milwaukee.

Are you fucking kidding? he muttered.

My instinct was to apologize, to tell him that I knew, that in fact my best friend was a Mets fan. But because I knew, I knew it wasn’t a question for me.

Amy Rossi is an MFA candidate in fiction at Louisiana State University. Her work has recently appeared online in Ninth Letterand The Journal of Compressed Creative Arts. She is a Red Sox fan because of geography and a Brewers fan because of Chris Capuano. She gained a deeper understanding of her best friend in 2011 while watching Cappy pitch for the Mets every fifth day.