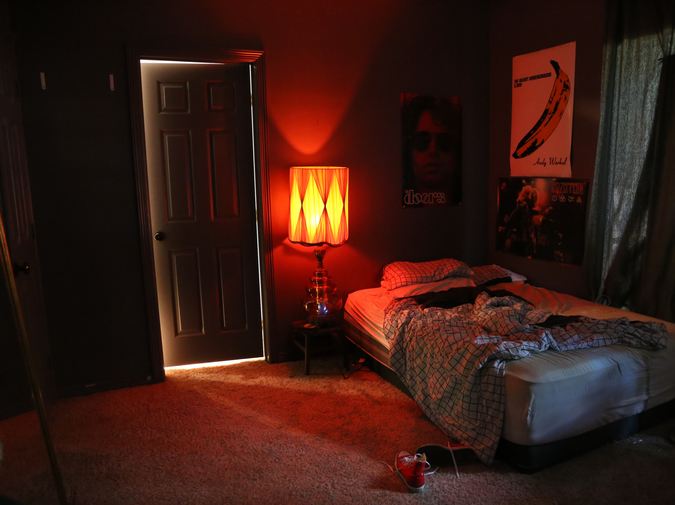 There Is A Light That Never Goes Out

“A temporary sleeping arrangement,” their mother had said. “Just until your aunt and uncle close on their new house. I’m giving them Rachel’s room. Don’t worry, honey, their dogs are housebroken.”

Rachel’s toes curl, peeking out from a purple quilt, and her blue-painted toenails scrape the rubber shell of the mattress. The quilt muffles a faint crescendo of groans as Rachel’s body squirms underneath the fabric, nostrils slurping, inhaling. Sniff, sniff. It all sounds so wet.

Rachel’s entire body seizes up—a fish freshly caught, waiting to be released. She rolls off the air mattress, grabs her phone, scurries into the bathroom, and closes the door. The flick of a light switch illuminates the outline of the door, projecting a faint glow of spotlight over Rachel’s empty habitat.

Behind the bathroom door, Rachel blows her nose.

“Seriously, I can’t get sick,” Jason says, watching her walk back to her mattress.

“Fuckin’ allergies.” She wipes snot from her upper lip with the heel of her palm, avoiding her fingertips like she’s just had her nails done. “Those dogs—” She crawls under the covers, plugs in her phone, and falls silent.

Jason has to be on the pitcher’s mound in seven hours, but Rachel’s gently covered curves and exposed calves command all the attention in his room like a once-welcomed houseguest Jason wishes would leave. The first night she moved in, Jason helped Rachel clear a patch of carpet in the corner of his bedroom, enough space for a twin air mattress. She held her phone and charger and searched for a nearby electrical socket. She sniffled.

Jason eyed her swollen nose like the head of a parasite. “Do not get me sick.” Rachel shook her head and disappeared into the bathroom, phone and charger in hand. The door closed, the faucet ran, and a minute later, a sneeze erupted, echoing off the floor tiles.

That was four days ago. She has sneezed every night since.

Jason flips onto his stomach, burying his head beneath his pillow, but the sound he anticipates is already playing in his ears, teasing his mind. Her sharp intake of breath. The shudder of her release. He’s waiting for it like torture. Last night, Jason could hear her nostrils getting more and more slick as she struggled against the noise of her half-deflated mattress, and when she sneezed—oh God when she sneezed—it was like a geyser shooting off.

Jason shoots up, rips off his covers and stomps into the bathroom, rummaging the cabinets for cotton balls, Q-tips, make-up sponges, anything to stuff into his ears to get some sleep. He spots an open box of tampons, empty. Jason plops down onto the toilet. Beside him, tiny hairs freckle the bottom of the bathtub like sprinkles of confetti. Someone shaved.

He yanks open a drawer and spots a few stray pills of Benadryl, dirty and newly shaken, like orphaned children. He pops them in his mouth and swallows them dry. He goes to the living room to sleep on the couch, but those damn dogs—those fucking squatters. Jason is allergic. His tear ducts water the second their demon heads pop up from behind the cushions, their black almond eyes staring him down.

Jason goes back to his room and turns on midnight radio, hoping the gesture will give his sister a clue. Rachel, I’m up. I’m four feet away. Please, I’m your brother! Through a tiny speaker, Morrissey’s voice serenades them, telling Jason, “There is a Light That Never Goes Out.” Beyond the window, their orange tree is in full bloom. Its branches tickle the moonlit air, and the fruit hangs low, tapping the plate glass like an old friend wanting to play. Jason keeps meaning to trim it back.

The next morning, Jason goes to his baseball game and plays like shit and everyone notices, everyone talks, and when he gets home, his sister is standing at the kitchen counter, peeling an orange. “Hey,” she says. Her matted hair is pulled up, and when he walks behind her, he spots the back of her earlobe—a tiny silver rod with no backing sticks out of the skin, like it would fall if the hole weren’t so tight.

She checks her phone. “I need to use your computer.”

“What’s wrong with yours?”

“Uuugh,” she swipes her screen with two fingers. “Can you please tell your girlfriend to stop texting me every time she can’t get a hold of you? It’s starting to get weird.”

“She’s not my girlfriend anymore.”

She scoffs, almost smiles. “Right.” The border of her pink silicone phone case is caked in a white, flaky residue.

Her knees are the color of bruised peaches.

“Want some?” she asks. Her thumb sinks into the ripe, muscular core of the orange, and a bead of thin juice runs down the back of her hand. The back of her forearm. She wipes her elbow. Licks her fingers and sniffles.

Jason dashes for his car keys and drives to Dairy Queen but ends up sitting in the parking lot, stuck on the phone with his girlfriend who won’t stop calling.

“Oh my God, I heard about the game. I knew I should have been there.”

“But I’m your good luck charm. Where are you?”

“Your family loves me. Come over.” Her voice is muffled. Jason can’t tell if she’s putting clothes on or taking them off.

“I have ice cream here.”

“I knew it! You are upset.” Something rustles in the background, like a tree branch wrestling a soft breeze caught in the gate of its leaves.

“What are you doing?” Jason says.

Jason drives to his girlfriend’s house, where her parents aren’t home. All he wants to do is watch the Astros game, but all she wants to do is fuck on their new, green velvet futon covered in dog hair.

“Baby, please—” Jason says, too exhausted to pry her fingers from his belt.

She nuzzles his neck. “Just one.”

“You’re upset about the game.”

She climbs on top of him. Tongues his nose. After two years of dating, no matter how many times he’s explained, “It’s not an ‘ON’ button,” she still treats his nose no different than a nipple.

She says things—so many things—like, “I’m so wet,” and “You’re so hard,” but that’s so not true. He knows she’s lying, but she fakes it so beautifully, he’s embarrassed to say anything. Eventually, she connects their flesh, fastening one around the other, nibbling his left nostril in the process.

“Come on,” she says, bucking her hips. Watering a tree to grow. “Come on, you’ll feel better. Lemme hear it.”

Jason closes his eyes. He shakes his head, confused. He’s so fucking tired. His eye sockets are swollen from the dog hair. She knows he’s allergic.

She adjusts the angle. “Just feel it.”

There’s a fresh box of tissues on the coffee table. It wasn’t there when he first sat down.

She moves faster, and for the first time in his life, Jason considers faking it just to appease a lover. He sniffles.

Her eyes go wide, and she smiles, wild and elated. “That’s it. Lemme hear it.”

He sniffles again. And again, getting slightly more theatrical with each slurp and snort, wondering how the hell he’s going to fake a sneeze.

He pulls his girlfriend into a hug, burying his nose in the frizzy curtain of her hair. But then, his nose catches a scent, and blood rushes to the bottom of his spine, tingling with warmth. His attention grows and shifts, pointing directly to the arousal in his sinuses, zoning in on the stiff, bothersome tickle. It grows outward. Prickles the capillaries. Soaks the hairs. His nostrils swell, and somewhere a cavity flexes. Jason visualizes all that soft tissue getting fatter, rising like dough, daring him to sneeze. To clamp down. To smell and take it in, take it all in.

“Just let it happen,” she whispers in his ear.

And when it does, when it finally does, Jason smells oranges.

Jan Saenz is a writer, photographer, and serial thrift shopper. Her work has appeared in Paper Darts, Bending Genres, Jellyfish Review, and Last Exit. She is currently working on her third unpublished novel and first collection of poems. Her first solo photography exhibition, Nocturnal Anxiety, is scheduled to open at The Bosque Gallery in Fall 2019. She lives in Northwest Houston with her husband and two kids. To stalk her, visit www.jansaenz.com or follow @jan_saenz.