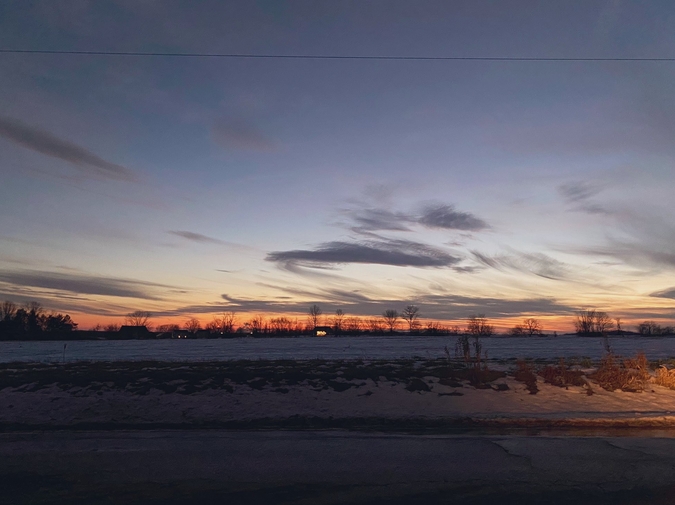 Sometimes, you’re almost certain you can sense a parallel universe forming, a version of you peeling away, to live in a reality in which everything, from this one point in time onwards, has taken a different course. You’ve felt it at little moments, like when you’re just a few seconds too late for a bus. Through a pinprick in the fabric of space-time, you can almost see the alternate you, perching on a seat and in motion, on her way to being ten minutes early instead of five minutes late to a drink with a friend. As you wait for the next bus to lumber along, sweating in the meager shade of the stop’s shelter, you can almost feel the other you’s hand already curling around the chill of a glass, feel her mouth opening in a laugh that will never belong to you.

This sense judders through you when you collide with the snowplow truck.

You’re twenty-three, on your way to your parents’ in Buffalo for Christmas after breaking up with your boyfriend. You’re pretty sure you’ve done the right thing – he was not always kind to you, had once left you in the middle of an alley in Toronto because you’d gotten into a fight over whether or not to eat at the Hard Rock Café. You don’t even remember if you had been the one who had wanted to eat there, or hadn’t, and it didn’t matter, because it was dark, and you’d had no idea how to get back to the hotel, because, with your vision slowly fading, you’d been relying on him more and more to take the lead and guide you through the world, which you’re pretty sure he found too burdensome. You don’t completely blame him for that, but you do blame him for running from you, stranding you in a city you barely knew at night. And you blame him for the times he’d tried to take things from you that felt like extracting payment, like the night you’d woken up with him inside of you, straining and pumping at the tender dryness between your legs, so that it was the knife-pain of your tearing skin that woke you. He didn’t seem to understand why you’d screamed as you’d pushed him off, why you were shaking with anger and fear.

You’re afraid now, as acceleration down the highway jams more miles between him and you. You aren’t sure if anyone else will want to take on the trouble of dating a disabled girl with degenerative vision loss. You haven’t always made things easy for him. Things aren’t always easy for you, and little barriers like computer error messages your text-to-speech software can’t read had thrown you into scream-sobs, and there was no right way for him to help you stop.

But the doctors have determined that, for now, you can have a license, and this means you are in control, driving yourself away from the things you’re ashamed you’d let your boyfriend do. This is something.

The sky is falling to black, and snow begins to drift, the promise of a storm you’re just at the edge of, a storm you’re trying to beat home. On the radio, “You Raise Me Up” by Josh Groban plays, a song you’ve never really loved, but you sing along full-throated, allowing it and all of its schmaltziness to give you confidence.

And then there’s the snowplow truck. In the left lane ahead of you, moving far more slowly than you, its many lights blinking a warning. You need to get over, to pass, and you flip on your signal. In the next lane, though, there’s a caravan of semis, trundling forward, tight as a herd. No room for you to merge in. To your left, a guardrail, and a rocky ravine. You’ve taken your foot off the gas, but you’re still gaining on the snowplow truck, impossibly fast, and it looms like a wall. You’ll have to hit it. You slam the brake pedal, seconds before the shock, the explosion of sound. And then you’re spinning, the world rotating once, twice, maybe more, the scream of truck horns in your ears. Or your own voice. Or both. Then stillness.

It takes minutes for your mind to catch up with your body, to begin to notice the hot damaged engine smell, to realize you’re on the right shoulder of the highway now, facing traffic, that your air bag has deployed into your face, that it’s pink, that your nose is raw from contact with it, but not broken. That, somehow, you must have skidded between the path of two oncoming semis. That you are also, somehow, alive. As you push open the door and stumble into the greyish slush to assess what is left of  your car, which looks like the beer cans your now ex-boyfriend likes to collapse between two hands, you feel it. Another you has sloughed away, the you whose car spun just a bit differently, who had not escaped the trajectory of hurtling traffic, has left her lacerated and broken body behind and just – isn’t, anymore. You feel the loss of her, as if stripped of your clothes, shiver in the chill of her leaving. You feel sorry for her, this dead girl who will not be taken, in a few minutes, to the hospital by a team of paramedics who keep telling you how lucky you are, who keep trying to get you to lie down so they can strap you to the backboard in the ambulance. But this you, the one still very much here, won’t and can’t lie down, signs the waiver instead because this you crackles with the energy of it, of the brief contact with another reality, of being the one who survived.

The not-dead version of you will wonder, later, days and years after being released from the hospital with only a sprained ankle, bruises that rainbow across your hips and chest and collarbone, and whiplash that makes every movement electric with pain, if another version of you, one that existed in the universe in which proteins in the ABCA-4 gene had not mutated, would have seen the snowplow truck in plenty of time, would have merged away long before. You are pretty sure you know the answer. You don’t like thinking about the non-disabled you. You’re pretty sure she doesn’t exist, that disability is inherent to your being, is a thread that is woven into every version, a shining connective strand that, from time to time, twitches and goes taut.

After a week recovering with your parents in Buffalo, your ankle is strong enough to walk on again, and you slip into the driver’s seat of your mother’s car. You told her you’d like to take it out, and she smiled, gave you the keys, said she’s proud of you for getting back on the horse. You turn the ignition, shift into first, feel the thrum of the engine run through you. You can go anywhere.

But you don’t. Someday, a doctor, or someone else, will have to tell you this is no longer something you’re allowed to do. You don’t know when that will be. It could be your next appointment at the eye clinic, or the next time you need to be pried from the remains of another vehicle, because there was something you just didn’t notice in time.

You switch off the car, sit in the quiet and cold. It’s starting to snow again.

It’s better this way, that you’re the one to stop. You know what you’re giving up. Driving is autonomy and mobility and freedom. But the one thing you can control, the only thing, is when it will be over for you.

Decide it will be now. Step out, shut the door gently behind you, and close your eyes.  Listen, hope you will feel the threads’ pull, hear the approving echoes of the other yous, as all of you choose the same, all turning your faces upwards to catch the falling snow.

Wendy Elizabeth Wallace (she/her) is a queer disabled writer. She grew up in Buffalo, New York, and has now landed in Connecticut by way of Pennsylvania, Berlin, Heidelberg, and Indiana. She is the co-founding editor of Peatsmoke: A Literary Journal, and met the kind people who suffer through her rough drafts at the Purdue University MFA. Her work has appeared in The Rumpus, Willow Springs, Longleaf Review, Pithead Chapel, The Los Angeles Review, and elsewhere. Find her on Twitter @WendyEWallace1 or at www.wendywallacewriter.com.