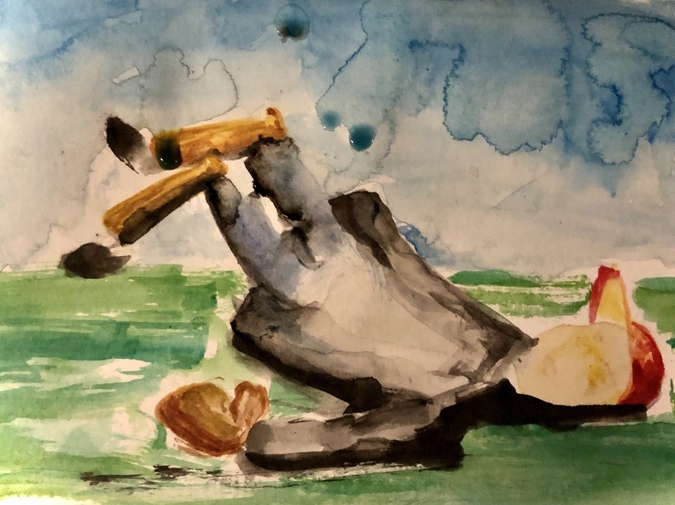 I was supposed to live at Dad’s the next day, but the Cardinals kept adding innings to innings and who can miss a game like that, the way a city like St. Louis breathes a year after the pennant with that well-earned cocky optimism, the way the Arch swaggers in its slight sway, the way the Mississippi whispers updates into the western tip of Southern Illinois, and how could we leave when the outfielders start to warm up in the bullpens and maybe, just maybe the managers glance up at the scoreboard flashing division standings and realize they have enough breathing room to let Yadi toss a few, for the crowd more than anything, and just maybe the vendors come back to take a seat with the 42,000 while Albert takes his hacks in the on-deck circle and the Chicago manager starts to shiver a bit because he’s never been so cold in Missouri, or because he’s afraid—it’s easy to be afraid, reasonable even, with the white towels swirling and the Anheuser Busch flowing and the sign in Big Mac Land still flickering a little from the last time number 5 stepped to the plate and how could we think about moving even an inch when the crowd rises and a cowbell claps and the pitch comes and the pitch disappears with Albert’s trot and the rest of us follow, every fan making their way around the bases before Mom and I walk back to the parking garage and parade over the Poplar Street Bridge toward Krispy Kreme and a warm dozen finished by the time the car comes to rest in the driveway with the waist-high corn all around showing the golden bits of the day’s first sun and at that point how can I expect to look Dad in the eye and tell him I prefer rice pilaf to all of this?

Evan Williams was born in a sac of bubblegum

that had to be popped surgically. When he came out

he had no hair, only a cap
turned backwards. The doctors held him up shouting,
“It’s a catcher!”

He had two baseball bats for legs, fragile
ash-wood. He learned to walk on
stilts from his first step.

He had two mitts for hands. Whenever he clapped
someone always threw something for him to catch,
even in polite company. This is how he ate:
Mother would throw him an apple or else a ham.
The table would holler “Squeeze!” while he fed

himself. Evan Williams cries 162 times a year, more
in the fall months. He tried out for the baseball team, but
he was made mascot instead.

Evan Jerome Williams is a die-hard St. Louis Cardinals fan and a student at The University of Chicago. His work has appeared or is forthcoming in HAD, The Little Patuxent Review, and DIAGRAM, among others. He tweets @evansquilliams.