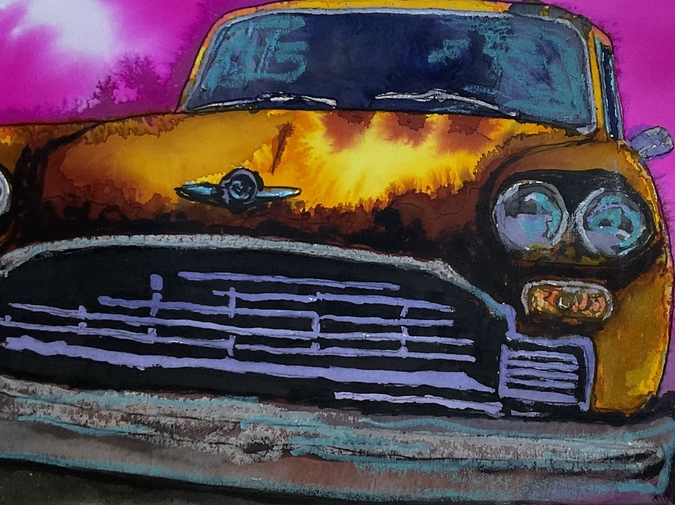 Waiting for the Sun to Shine: The Past and Taxi Driver

In December 1969, the fate of thousands was discovered through televised lottery. All three-hundred and sixty-six days of the year, including the 29th of February, had been typed on one-by-four-inch strips of paper and placed into blue plastic capsules the size of pill bottles. These capsules had in turn been dumped into glass jars—deep and wide-mouthed so the capsules could be easily pulled out one at a time to reveal who would be drafted first.

The country watched as slips of paper were retrieved and placed into slots on a massive board beside the capsules. Barring deferments, these men would all be called to military service in exactly one month’s time, united by nothing more than random numbers: the lottery of birth.

My dad was one of them.

The opening shot of Taxi Driver is of an enormous-looking yellow cab emerging from smoke like a monolith. We then see in close-up Travis Bickle’s eyes lit by neon lights, as though he were an earthbound version of Dave Bowman in 2001: A Space Odyssey, en route to some as-yet unknown destiny.

Bickle is someone who does not wish to be known. I couldn’t tell you much about him other than that he was a Marine in Vietnam and, suffering from insomnia, now drives taxis. He does not share much with those around him, and in fact seems to find most of the rest of the world inherently untrustworthy. On the left sleeve of his olive fatigues he wears a King Kong patch in a sly reference to the similarity between the two stories: a beast from another world, unable to function in or communicate with this one, resorts to violence.

My dad was a conscientious objector in Vietnam. He spent the war as a dental assistant, tasked primarily with helping pull rotten teeth from local Vietnamese who desperately needed it. There was a time when his base was attacked, but he’s never really talked about that. Once, in the attic of our childhood home, I found some of his old Vietnam stuff—his discharge papers, parts of his uniform, his Army sleeping bag. I’d hoped that these might offer some profound insight, but they were merely silent artifacts from long ago. A simple discharge, some elements of a past life—only enough to note that a young man had once been in Vietnam, and had since left.

There is a sense of hopeless inevitability throughout Taxi Driver, even or especially in what I find to be the film’s two most important moments. The first is a scene where a passenger watches his wife in silhouette as she undresses in another man’s apartment. The passenger is famously played by Scorsese himself, forced to take over the role due to an unavailable actor, and he speaks in quick, looping sentences as he discusses what a .44 Magnum is capable of. The violence and racism and misogyny that Travis’s fare spouts seems, at first, to be something that perhaps upsets Travis or at least puts him on edge—but these same thoughts have already taken root in Travis himself, the damage has already been done.

This scene is closely followed by another important moment, perhaps the most sincere moment in the film: a conversation between Travis and a man we know only as Wizard. This is a rare moment where Travis Bickle truly lets his guard down—just for a moment. He speaks in half-formed sentences, vague ideas that seem unconnected at first but which lead to his main point: “I’ve got some bad ideas in my head.” There is recognition, though still subconscious, that something is off. To which Wizard, well-meaning but oblivious, replies: “You get a job, you become the job. One guy lives in Brooklyn. One guy lives in Sutton Place. You got a lawyer. Another guy's a doctor. Another guy dies. Another guy gets well. People are born, y'know? I envy you, your youth. Go on, get laid, get drunk. Do anything. You got no choice, anyway. I mean, we're all fucked. More or less, y’know.”

After the shootout at the film’s climax, Travis will be referred to in the papers only as “a taxi driver.” He has taken a job, and he will become that job. He does not escape this fate. But in that moment Travis looks at Wizard and smiles. “I don't know,” he says. “That's about the dumbest thing I ever heard.”

My dad drove taxis. This was long before I was born, when he was still living in Denver and had just gotten back from Vietnam. I don’t know much about this time of his life—he’s never volunteered much information about it and I’ve never spent too much time prying. Once, during a particularly happy Thanksgiving or Christmas maybe fifteen years ago now, when we were all home and enjoying each other’s company, he obliquely referred to this period of his life as something oddly specific that I can no longer quite remember—his five-year blackout, or maybe his five-year hangover. Something along those lines, something that clearly signaled further discussion was out of the question. I didn’t ask any more about it. Around the same time he drove taxis, or maybe before or after—the timeline here is vague and imprecise—he was interested in or perhaps even following the teachings of a man who called himself “Bubba Free John,” founder of Adidam, a religious movement of sorts in northern California. This is another part of his life I know very little about. I do know, from googling, that Bubba Free John was later credibly accused of false imprisonment, assault and battery, psychological, physical, and sexual abuse. He claimed to have been born perfectly free and deeply aware of the Heart, the ultimate reality. Said he renounced all this to embrace the full human experience. In 1970 he recognized himself as the one God, and then in 2008 died of a heart attack.

I don’t know how much my dad knew of all this, or how closely he followed or even cared about it. But I do know that he drove taxis. I know that much.

We never truly know what Travis wants, and neither (it seems) does Travis. He is adrift throughout the film; when he meets Betsy, a campaign worker for presidential candidate Charles Palantine, Travis becomes obsessed with Palantine as though by osmosis. It is not his own enthusiasm but is rather borrowed—he wants to be with Betsy, and so takes on her desires. When she rejects him, he turns on Palantine and launches a poorly thought through assassination attempt. As he scopes out one of Palantine’s events, he sidles up to a Secret Service officer, who says he’s simply waiting for the senator. “Shit, man,” Travis says. “I’m waiting for the sun to shine.” And then gives the officer a false name: Henry Krinkle.

We don’t know who any of these people really are: Harvey Keitel’s character is most often called “Sport”—sometimes Matthew—but we learn in the newspaper clippings at the end that his real name was Charles Rain. Jodie Foster’s character is initially called “Easy” before she admits her name is Iris, but this too feels like it’s not real, not meant to be totally believed. Scorsese is credited only as “Passenger Watching Silhouette.” But it doesn’t ultimately matter to the film what you call any of these people. We’ve met them all before, or ones very much like them; they are the people on the periphery of our lives, seen and known only in part and only for a few moments, quickly forgotten.

My dad’s last name isn’t Ross originally. It’s Adams. His dad bailed on him and his mom two years after my dad was born. When I was twelve or thirteen, I asked him if he’d ever tried to find his biological dad, but he said, He’s never tried to find me, why should I find him? and left it at that. I remember finding that odd at the time—why would anyone not look up their own biological father? was he not curious at all?—but I can’t blame him. Here I am, twenty-plus years later, and I’ve never bothered, either.

There is a cyclical nature to Taxi Driver. It was engineered in such a way that the film could loop back into itself over and over again. There is an inevitability to it. A lot of that is due to the score. Scorsese, instead of relying on songs like he’d previously done in Mean Streets and would become famous for throughout his career, had chosen Bernard Herrmann, a legendary composer of the Golden Age of Hollywood and best known for scoring such classics as Citizen Kane (his first feature film), The Day the Earth Stood Still, Psycho, Vertigo, North by Northwest. Herrmann for the most part intentionally avoided the use of strings for Taxi Driver and instead relied on brass instruments and a more discordant sound to give the score more “muscle.” As he was wrapping up the sound editing for Taxi Driver in late 1975, there was dissatisfaction with one final element of the film—the musical sting as Travis adjusts the mirror in the final shot. Herrmann suggested looping it backwards to imply the cyclical nature of the film, that all of this would happen again—and be far worse next time. They replayed the scene set to this new reversed sting and knew they’d solved it. And then that night, in the early hours of Christmas Eve 1975, Herrmann fell asleep and died of heart failure.

To be vulnerable with others is to allow space for wounds. The natural solution, therefore, is to never truly speak of things that really matter. And I see in myself what I see in my dad. His propensity for silence is now mine. I’m worried I’ll be the same way with my kids. That I’ll leave too much unsaid, be present in body but absent in spirit—forever adjusting the rearview mirror to look back, worried that the past prescribes the future, thinking always of history that’s lost forever, of yellow cabs and forgotten years, of a young man drafted into a distant war, of a father’s abandonment. Those things are gone. But we’re still here, today, waiting for the sun to shine.

Austin Ross's fiction and essays have been or will soon be featured at Necessary Fiction, Lost Balloon, Still: The Journal, and elsewhere. He is an editor at Flash Fiction Magazine and a reader at CRAFT Literary, and lives near Washington, DC with his family. Visit www.austinrossauthor.com for more or follow him on Twitter @AustinTRoss.