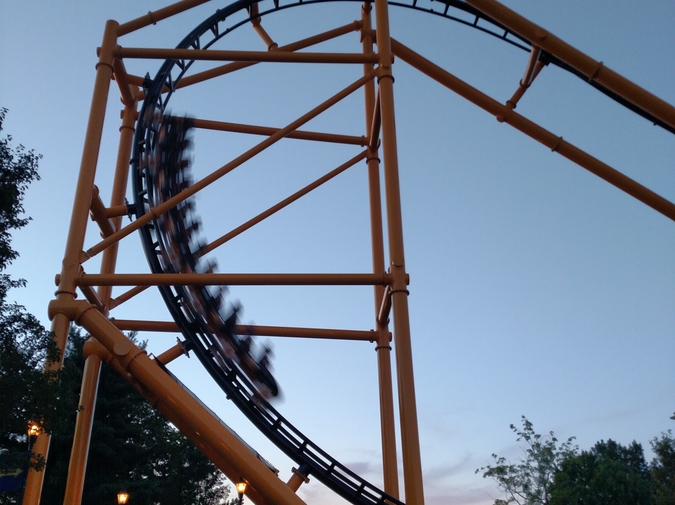 It was Xiu's first time going to No Frills alone.

Xiu looked at her red wallet with intricate, traditional Chinese designs sewn onto its surface, and glanced at the cold and distant object next to it—her grandchildren called it an "iPad." She never understood how it worked, and the children were too impatient to teach her. The iPad was set to Chinese in hopes that Xiu would be able to learn how to use it. Even though Xiu understood Chinese, there was another issue—she didn’t understand the language of technology. She picked up the wallet and felt a comforting warmth from its worn fabric; it was one of the only things she brought from her hometown when her son brought her to Canada.

Xiu traced the patterns of the design. The once shimmering threads had dulled from many years of use. The edges had frayed. Yet, she preferred this wallet over all the others that her daughters-in-law and other relatives in Canada had purchased for her. The new leather wallets felt outlandish, and the brand name ones, covered in English letters, seemed childish and odd in her eyes.

Xiu looked inside—two bills with a foreign man's face and large number fives printed on them sat curled together; a few coins embossed with animals, ships, and leaves jingled around them. At least numbers were universal. This would be enough.

She clasped her weathered hands together and held them up to her forehead. There were lines etched into her skin. She stood and prayed in front of her closet, murmuring the words of her hometown dialect—Fujianese—under her breath.

Then, she grabbed her thin fall vest and pulled on wool gloves—both also from her old home. Though it wasn't cold outside, Xiu felt more comfortable with extra layers.

Xiu's son would not be home until well past ten, maybe eleven, and his wife would be back around nine, depending on the train she had to take from downtown to Scarborough. She only had to cook for herself and her two granddaughters. She would have to walk them home from school in two hours; that meant she had an hour and a half to go to No Frills.

The old woman pocketed her old watch—the strap of one side had broken off, but she refused to replace it—before she made her way to the front door. Right when she opened the door, the phone rang. Xiu decided to leave it; usually, the children answered the calls before their parents returned. She did not want to listen to the meaningless garble on the other end anyhow. Her lips could not form the necessary foreign words, and even if they could, she could not give the words the same meaning as the children. Xiu slipped on the worn cloth shoes she brought with her from her homeland, and then locked the front door behind her.

At the end of the driveway, she took an immediate right. She ignored the scenery around her, counting her steps absentmindedly until she reached the first street that led out of the neighborhood. As she neared the main road, she saw the cars rush by; occasionally, they slowed and turned onto her street. Xiu stared straight ahead even as the cars drove past her. They might be neighbors, and if she met their eyes, they might slow down. And if they slowed down, they might pull over and roll down their windows. And if they rolled down their windows, they might smile and ask how she was doing. And if they smiled and asked how she was doing, she would have to smile and nod until they both looked away in awkward silence. She would have to listen to their windows being rolled up and their car driving away. In China, she wouldn't worry because she could answer jollily in Fujianese and continue on her way.

Xiu looked at the street sign: a tall letter topped with a flat hat, two short ones that followed after, a letter that resembled a backwards music note on her granddaughter's piano score, two short ones again, the backwards music note once more, two more short ones, and it ended with a sideways scissor. She shook her head and decided to call it 'Waves' because that was how it would look if she drew a continuous line on top of the name.

Xiu took a right after she passed the sign. The last time the whole family went to No Frills, her son had turned left. The street name began with a snake shape but ended with a music note with two dips in between. Xiu named the street 'Seesaw.' When she reached Seesaw, she knew No Frills would be just around the corner.

At the grocery store, the back of Xiu’s sweater stuck to her skin, and her sweat had soaked through its holey fabric and drenched her vest. She was worried that other shoppers would be able to see the color difference.

She stood at the entrance and was startled when the automated door suddenly swung open. Xiu stared at the metal bars that awaited her; she would have to push past them to get inside. Yet, just thinking about pushing past the bars made Xiu feel like an intruder.

"Ma'am?" A voice came from behind her, startling her more than the door had.

Rather than looking behind her, Xiu, with her head ducked low, walked as quickly as her feet would carry her into the grocery store. Xiu contemplated grabbing a shopping cart but quickly decided against it as it would slow her down and draw more attention. After all, she only needed an item or two to make dinner.

The quietness of No Frills was unnerving. The sound of wheels and the buzzing of the lights overhead filled Xiu's ears. She didn’t like how artificial how everything looked and sounded. In the produce section, she searched for cabbage, the closest thing to the choi found in Chinese supermarkets. She clicked her tongue. The leaves on the cabbage drooped in her hands and she was reminded of the farm she worked on back home; the vegetables were much fresher there. Even the ones in the Chinese supermarkets in Chinatown were fresher, though not much. But she would gladly purchase them there because the shopkeepers who shouted outside made it feel as though her money and presence were valued rather than ignored. She shook her head and cradled the cabbage in her left arm. Limp or not, it was necessary for dinner. Then, she made haste towards the meats section, careful to avoid the shopping carts in her path and the eyes of other shoppers.

Once she picked up what appeared to be chicken breasts, Xiu marched towards the cashier with her two items in hand. After observing each of the checkout lines, Xiu took her spot behind an elderly man with a cane; the location of the checkout lane was conveniently right next to the exit—exactly what she wanted.

"That will be $10.50," the cashier—a young woman perhaps twenty-five—said in English.

Xiu's throat tightened and dried. She tried to maintain a confident smile as she reached inside her vest pocket for her wallet. Her hands shook as she opened it. Xiu stared hard at the folded bills and pieces of metal.

"Ma’am—" the cashier began, but Xiu raised her hand and waved it frantically. She shut her wallet and ran out of the store. She broke into a sweat again, and her cheeks felt inflamed. Xiu did not stop walking until No Frills was well out of sight, leaving Seesaw, the chicken breasts, and the cabbage behind.

After she brought her grandchildren home from school, Xiu began to cook dinner while the children watched TV. The high-pitched voices of cartoon characters were white noise to her, but to the children it was pure delight. There were only eggs and steamed fish from the night before left in the fridge. She resigned to work with what she had on hand.

When both granddaughters settled themselves down at the dinner table, the eldest, Yin, said in Chinese, "Fish, again? Why can't we have something else?"

"Don't waste food. Just eat it," Xiu reprimanded her. Failure stirred within her empty stomach as she watched her granddaughter grumble in English.

Jenny, the younger sibling, who was born in Canada unlike her older sister, and didn’t speak Chinese, paid little attention to the exchange between Yin and Xiu, humming the new words she had learned in kindergarten that day. Jenny's song was interrupted by the shrill ring of the phone which caused her to drop her chopsticks and scramble towards it. Yin rolled her eyes and continued to eat with a scowl.

Xiu stared at the little girl in awe and chuckled to herself. She could never understand how children could pick up languages so quickly, and she was amazed at the confidence in Jenny's tone, the assurance on her face, as she spoke words that seemed so distant to Xiu even though they floated into the kitchen from only the other room.

The next day, Xiu decided to try going to No Frills once more.

She prayed again in front of her closet with her palms pressed together and held up to her head, whispering in the language she knew. She grabbed her wallet and watch. She paused for a moment, and then swiped the new leather wallet off the table, although it was empty and had the price tag still attached. It was too big for her pants pockets, so she would have to hold it. This time, she abandoned her vest and gloves. Xiu brushed her hair back from her face and secured it in place with crisscrossed bobby pins on each side, looked in the mirror and straightened her back, before heading for the door.

The phone rang right after Xiu had locked the front door. This time, though, she unlocked the door and flung it open, flying towards the phone before the caller on the other end exhausted their patience.

"Sorry!" Xiu shouted quickly. Her tongue twisted and tingled with the feeling of the foreign word. She didn't wait for the caller to respond before hanging up quickly because that was the only word she remembered from Jenny the night before. To wait would mean giving the caller a chance to leave her voiceless.

Xiu knew she would return home with the cabbage and chicken breasts this time. She closed the door behind her once again, heading towards Waves and Seesaw, staring straight ahead without counting her steps, new wallet held in front of her like a prize.

Ai Jiang (@AiJiang_) is a Chinese-Canadian writer. She graduated with a BA in Literature from the University of Toronto and is a current student at the Humber School for Writers. Her work has appeared or is forthcoming in Maudlin House, Haunted Waters Press, and elsewhere. Find her online at aijiang.ca.