When he was a boy, Carlitos used to stare out the side window of the family Ford as they glided down the freeway. Some kids imagined themselves out there, riding a motorcycle alongside the car while doing wheelies across the furrowed cornfields, jumping over bales of hay, high-wiring along telephone lines. Not Carlitos. When he looked out the window at 65 m.p.h. through the heart of Nebraska, he imagined that he was drawing. All of it. Every single detail of everything in sight, flying off the tip of his racing pencil.

The sensation was immediate. "This kid is amazing! He draws with lifelike accuracy at a speed we've never seen!"

He started drawing every single thing around him, as it was happening. Soon he needed more notebooks than he was able to carry with him at a time. People began to follow him around with blank sketch pads--some private individuals, some sponsored by charitable institutions or government agencies--to keep him supplied with fresh paper for every single moment that went by.

A tech startup called SketchLife began live-streaming the drawings as he did them, via a micro-camera embedded in the bridge of his nose. Across the globe, people watched from their homes as Carlitos shifted his gaze from the sidewalk outside to the blank page where he sketched out the rough lines of perspective and embellished splashes of detail with seemingly effortless flourishes. Sweeping cityscapes seen from the back seat of a car at rush hour; or the quiet shifting of headlights across a bedroom wall at night--Carlitos drew it all.

With time, his technique evolved. He was now drawing more impressionistically, adding less intricate detail. It had the effect of making his drawings seem even more vividly realistic: our own brains supplied the missing elements.

There was no turning back once SketchLife introduced their LifeVision lenses. A simple procedure inserted a lens into your eye where you could dial into Carlitos's real-time sketch of the world. If you signed up for the Friends Plan you could access a Carlitos-drawn sketch of your own view, developed in real time with Carlitos and his workshop of artist-apprentices.

People always had the option, projected directly onto the upper right corner of their lenses, to close out from the LifeVision view and return to their actual real world view. You don't need me to tell you that people weren't doing that very often anymore.

Some noticed that over time Carlitos did less and less looking up from the sketchpad. Most of the time, the view that people saw inside their eyeballs was just that of the white page steadily filling up with quickly sketched lines. Was he making it up at this point? Did it matter? And who could blame us for being enchanted?

Watching Carlitos's unwinding sketch of the world felt hypnotic. There was something comforting about thinking that the world we were moving through was the product of somebody's design, even if it was just a ten-year-old boy in the back of a family sedan speeding along a lonesome highway. 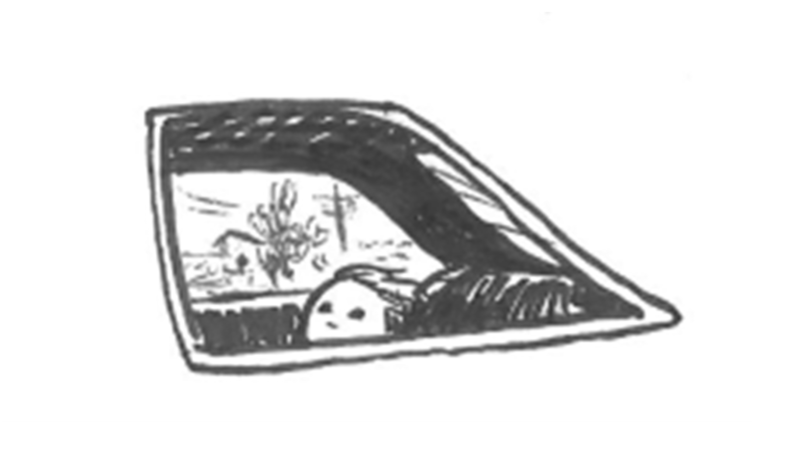 A.C. Koch is a teacher, writer and musician whose work has been published in Analog, Split/Lip, Puerto del Sol, Hobart and elsewhere. After spending about fifteen years living and working overseas (France, South Korea, Mexico), Koch resides in Denver, Colorado, working with language learners and making music with Firstimers, a power-pop ensemble.